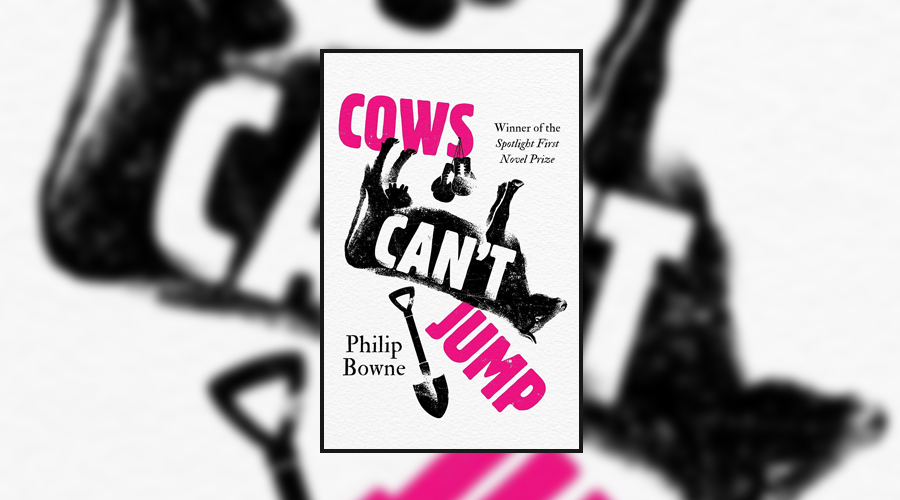 If faith is taking the first step even if you can’t see the staircase, then setting off on a European adventure to find your lost love feels like a fervent leap into the void. Cows Can’t Jump follows 18-year-old Billy – disappointed, apathetic, and desperate for escape – as he ill-advisedly puts all his faith in frustratingly aloof and pathologically unpredictable Eva to save him from a life of gravedigging and living with his conservative parents. After she unexpectedly ups and leaves, Billy takes a leap of faith and sets off on a self-destructive voyage across Europe to find her.

Wonderfully dry and full of wry asides – Billy’s thought after his father suggests leaving the EU will put an end to his grandfather’s wedding to a West Indian lady, ‘I wanted to point out that the West Indies wasn’t a part of Europe’, is particularly droll – the novel wittily and lovingly depicts the frustration of late adolescence and first love, and also wrestles with generational conflict, ideological difference, and losing faith in yourself as well as everything else.

Throughout his adventure, Billy finds that the adult world is full of false idols: those lost loves and crucifixes and castles – or, cattle – in the air that we all put our faith in to prove to us that life is worth living and to find the courage to fight for it. Characteristically frankly, while waiting for Eva in an isolated church watched over by a statue of the Virgin, Billy is eventually confronted with the truth: ‘that being an adult is being terrified and cowardly and frightened of everything all the time’.

The narrative voice isn’t afraid of portraying all the pathetic longing and naivety of adolescence, yet never trivialises the follies and feelings of youth, even as they occur alongside era-defining events. The novel deftly and wryly captures the polarised politics of 2016, particularly the aftereffects of the vote to leave the EU, which Billy was too young to vote in but nevertheless has faith that if he did, his life and the fate of the country ‘would’ve been different’. It even uses the onslaught of deaths of influential figures to date particular events in Billy’s life, and it’s a darkly witty and astute weaving of the everyday with the epochal.

In an adventure that features everything from grave-digging to delivering calves to walking to safety with asylum seekers, it does feel a little far-fetched and winding in places, although not as far-fetched as, say, the UK voting to leave the EU, or the election of a TV star to the US presidency. Along with the fast pace and the episodic nature of the adventure, it’s easy to forgive and even to see any far-fetchedness as unapologetically frank in itself, as Billy grapples with the greatest and the darkest facets of an unprecedented age.

Even though the story exists in a very defined setting, and there’s a cast of fantastically captured eccentrics, like God-fearing Christoph, straight-talking trucker Klara, and lovesick Cooper to keep Billy’s feet on the ground (or, in the passenger seat of these strangers’ cars), the least definite aspect of the story, as in his life, is Eva.

A fling that developed into an infatuation, as a character Eva exists largely in the past or in the digital sphere, and as she drifts further from him, Billy has to face that there’s no concrete proof of their love for each other: ‘everything [they] shared was up in space’, and he owns ‘nothing that could be a symbol of [them]’. And, it turns out, while Billy is also infatuated with iconography, figuratively sacrificing his soul at the altar of Eva, surfacing from his final ordeal only ‘a crown of thorns and a crucifix’ away from looking like Christ, Eva prefers the physical fact of post-war concrete.

The ideological leap from figurative to physical, from Billy’s idea of Eva to Eva in actual fact, proves a step too far: ‘I could never see beauty in a concrete building. Maybe that’s why she wouldn’t see me. It’s hard to be in love with someone that can’t see beauty in the things you do. That night […] I started thinking of her as a concrete tower with no windows or doors, as something I would only ever know from the outside’.

Yet, despite her love for it, Eva isn’t a piece of concrete for Billy to carve: she doesn’t exist to act as his saviour or as a statue to idolise, and is in fact not longing for him like a follower at the foot of Christ, but living and loving and fucking it all up just like he is. For Billy, Eva’s deviation from the narrative is devastating, but it’s part of an essential lesson we’ve all learnt the difficult way as young adults: others aren’t plot devices there to serve our stories or develop our characters, and life isn’t only lived from our perspective.

Although, from any perspective finding yourself is like a leap of faith, particularly if, like Billy, you’ve lost faith in everything that’s supposed to catch you if you fall. Even though a crucifix dangles from Billy’s neck like a potent icon even after he’s lost all faith in Eva, in the EU, and even in God, he finds that faith is less signified by a Christian idol than it is ‘dozens of keys collected over years of life, and locks, and opportunities’. That is, faith is easily lost, difficult to find, and an essential part of unlocking what it is you’re looking for.

Frank, witty, and uplifting, Cows Can’t Jump is a novel that sets off on a voyage full of introspection, adolescent longing, and finding yourself even if the world feels lost to you: we can get life off the ground, so long as we take that first step.