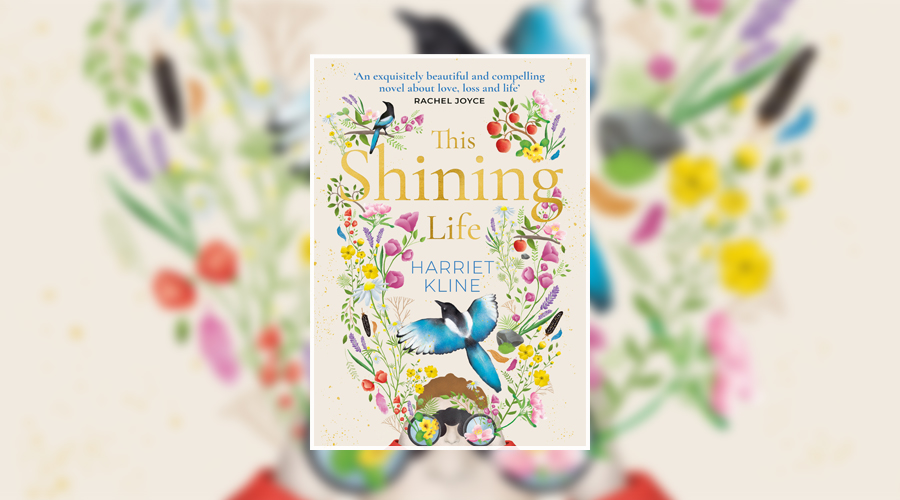 Book Review: The Sweetness of Water by Nathan Harris

This Shining Life is about love and grief, how it can tear a family apart and how it can bring them together again. We learn, in the opening pages that Rich, a beloved father, husband, son and friend has an inoperable brain tumour. In this extract, his parents, Marjorie and Gerald, have just spoken to Rich on the telephone and he has told them he has only months left to live. – Harriet Kline

Gerald had emptied out the drawers of his desk. Now he was rummaging through the bureau. There were envelopes and papers scattered at his feet. A spool of address stickers unfurled and sped across the floor. Marjorie went after it and tried to roll it up.

“Gerald, sit down please!” She heard a pen crunch under his feet and hoped it wasn’t a fountain pen that would leak into the carpet. The last thing she needed now was a dark mark on the floor, just where the women’s committee from the church would see it when they came, as she knew they would, with flowers and cards of condolence. Or would they? Perhaps they would have to wait for Richard to die before they brought cards.

She knelt down and tried to gather the papers into a pile. Her hands were shaking and her mouth was dry. Sweet tea was the thing. She ought to be bringing a tray to the table, a biscuit on the saucer. She had bought some lovely tissues only yesterday, with gladioli on the box. She should be sliding them across the table towards him now as he sipped his tea. She should not be on her knees with a bundle of bank statements in her hands.

“That podgy fellow,” Gerald said now. He rattled through the pages of an address book and tossed it aside. “Knight-something with the ghastly wife. We should get on the phone to him.” Gerald was a tall man but in recent years had developed a stoop. It thrust his chin forward and loosened the skin around his jowls.

“Anthony Knight?” Marjorie said to him, sitting back on her heels. “Why on earth? Look, just let me get you a drink.” She struggled to her feet and placed the papers on the desk. He swept them all back onto the floor.

“Where’s the damn address book? It was here yesterday. Someone’s hidden it.”

Marjorie’s vision began to speckle. She could see Gerald leaning on the bureau, rattling it, but puffs of stippled silver covered his face. If she fainted now, she thought, feeling for the wall with her hand, Gerald wouldn’t even notice. There had been a time when he would have been the one urging her to sit down. He’d have brought the tea, patted her hands. Three little taps, he used to give her, their secret signal. I’m here, we’re in this together.  He’d tap her waist as they walked together into a party, or her knee under the table at a work dinner. Even at Ruth and Richard’s house he’d give her those three little nudges as they sank into their dreadful sofa. They kept her smiling if Ruth offered her tea in a chipped mug or if Ollie started fretting. But now she could not imagine how she would ever smile again. And even if Gerald were to give his three little taps, what good would they do?

“I’ve remembered his name,” Gerald said. “Anthony Knight. Top of his field, he is.  He’ll sort this out.”

He peered behind the bureau, crumpling papers underfoot as he shuffled round it.

“Anthony Knight’s an accountant,” Marjorie said. “I don’t see how he can help.”

“High up, isn’t he, in the hospital trust? Knows who’s who. If I could find his damn number I could get onto him now.”

She had to leave him there. She was crying and she didn’t want him to see her with her make-up smudged. If he’d sat with her, over tea and tissues, they could have comforted each other. But now there were tears coursing down her face.  She could taste the mix of face powder and salt as they leaked into her mouth.

She went to the bedroom and wiped it all away with a cotton pad. She looked faded when she’d finished. Her eyes, the same blue as Richard’s were bloodshot, and, without the make-up, they seemed to sink away into her brows. Her skin was thin, finely wrinkled, and her hair, with its chestnut tint, was too harsh against her temples. Lifeless, she thought, and the word jabbed at her. Would Richard seem faded the next time she saw him? Would his eyes cloud and his shoulders sag the way his father’s had? There was a photograph of him on the dressing table. He had emailed it only recently and she had printed it out and put it into a frame. He stood between Ruth and Ollie, the sky pink behind him. Celebrating the end of term, he had written. Six weeks of relaxing ahead. She had written straight back. Please bring Ollie to see us, darling. I’ll speak to your father. Surely we can sort this out. It seemed like months since she’d seen Ollie. There had been an uncomfortable altercation – one of those moments when she’d turned her attention away from Gerald for a moment and he’d lost his temper over something silly, Ollie stamping his foot and not saying thank you for a present.

This Shining Life is published by Doubleday on 1 July 2021

Book Review: The Sweetness of Water by Nathan Harris