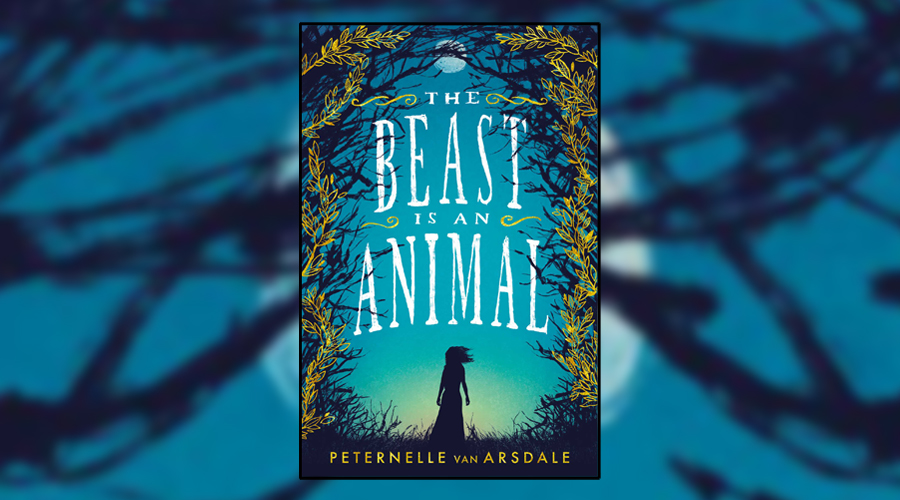 Traditional fairy tales were typically dark, unsettling and nightmare inducing stories. Take the original Brothers’ Grimm tales for example, the first editions deemed so unsuitable for children that they had to be edited before they could be translated and published in English. We’ve grown accustomed to the sugary, watered down fairy tales of recent years, the Disney yarns where dashing protectors sweep in to save the day and everyone lives happily ever after. Peternelle van Arsdale has no interest in bright, sunny endings, as The Beast Is An Animal can attest to.

This is not a fairy tale as you know it. It’s a haunting and beautifully written story that crawls out of the pages and creeps into your heart. It begins with a child called Alys, who’s tragically orphaned when two soul eating sisters – swathed in mud and twigs and leaves – sweep through her village and murder everyone over the age of fifteen. Taken away from the only home she’s ever known, Alys and the other orphans are raised in a place called Defaid, where the villagers are suspicious of the children the soul eaters spared. The orphans – treated no better than glorified servants – are forced to guard the village at night and raise the alarm at the first sign of danger.

Alys has witnessed the soul eaters up close, the twin sisters who whisper in the darkness and lure out their victims. She’s seen people disappear into the fforest and never return. So when the villagers turn on her, believing that she’s a witch, Alys is forced to flee into the very heart of the fforest that conjures such fear. But Alys senses the malevolence lurking in the shadows and she’s seen The Beast that haunts people’s nightmares. With the soul eaters tearing through towns, Alys has to decide where the real evil lies: Is it with the twins made of mud and leaves, or is it The Beast with claws and wings? Or worse still, does the wickedness reside in her own heart?

“This was the fforest that mothers and fathers warned their children about, the one that all the stories were told about, the place where nightmares were hatched.”

The Beast Is An Animal is a classic fairy tale for the modern age. It’s full of disquieting mystery and medieval magic, taking a deliberate, measured approach that draws out the increasing threat. In many ways, it’s a very simple story but Peternelle van Arsdale writes with such poetry and poignancy that it feels profound. She doesn’t tiptoe around the evil, she jumps headfirst into it; whole villages succumb to the soul eaters, archaic faith prompts mass hysteria, and Alys isn’t able to save everyone she cares about. Chapters involving the witch hunt are some of the most terrifying because they echo persecutions from our own history.

The world building is intricately detailed and you experience every single emotion that Alys feels. With such a visceral build-up, The Beast doesn’t have a very prominent part in the story, which might disappoint some readers hoping for a more literal monster. Given the soul eating sisters are the true antagonists, I was also expecting a world-shattering denouement between them and Alys. Instead, the story ends with a fizzle rather than a bang, leaving the conclusion feeling a little flat.

However, the rest of the novel more than makes up for the tame end, delivering an eerie and atmospheric read that lingers like an affecting dream you’re not ready to forget.