A tortoise walks across the screen. He’s pretty much there, but hasn’t quite made it. John Carroll Lynch’s directorial debut, Lucky, is a sensitive, personal and profound piece of cinema; a slice of a world we rarely see. The inevitability of death is something that will affect us all. Hollywood can give the impression that icons live forever and, when Harry Dean Stanton only passed last month, it proved once again that the scythe of fate will never miss anyone. Lucky, with a sly wit, a warm charm and a loving embrace of its leading actor, ensures that not only is his final film a fitting tribute but also one that will stick with you in your quiet contemplative moments.

Set in a dusty town within a vast desert landscape. Harry Dean Stanton is Lucky. He wakes up, slips on his slippers and brushes his teeth. He stretches and makes a coffee. He walks to his local diner, in cowboy boots and Western hat and takes a jab at the owner. “You’re nothing”, they both share with each other before Lucky takes a seat. His usual creamy coffee and crossword are what pass the time and he exchanges pleasantries with the patrons and waitress. He then walks to the local shop, marches to the fridge and then, at the till, asks for some cigarettes from the cashier. At home, now back down to his underwear, he watches gameshows and completes the crossword. In the evening, he visits the bar and hears stories from the owner and her husband, while his friend tells us of his lost tortoise: the tortoise from those symbolic opening moments. This is automatic and routine. Everyone in town knows who Lucky is and his dry demeanour and hang dog expression is part of his charming presence. The next day, he repeats and, while drinking his coffee he stares at the clock on the machine. He stares and drops to the floor. The doctor says he is as healthy as he can be – but he’s getting old. Death is a part of life and his body is slowly, but surely, shutting down. 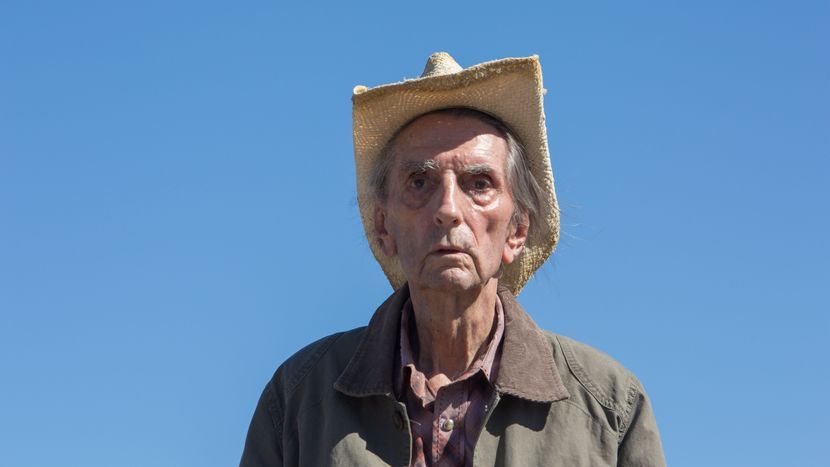 Harry Dean Stanton’s recent passing is what hovers over this film like an angelic aura. His exquisite timing and likable persona only forces the film to resonate further. His character is an atheist and his determined walk, ignorance of the local church and daily shout to an old haunt are traits that define who he is. But Lucky does manage to speak to us on many occasions, and when he does, we listen. That’s what is so impressive about Stanton, his ability to make you hunch in and savour every word he delivers.

To support him in his role is a diverse cast and a collective that couldn’t be matched. David Lynch as tortoise owner, Howard, who delivers a monologue that makes the hair stand on the back of your neck. Then there’s Ron Livingstone as the leech lawyer, who feeds off the older men’s fragility. Ed Begley Jr, Barry Shabaka Henley and Beth Grant all play minor, memorable roles that bring this Southern American town to life. Lucky is a cynic, scoffing when he sees two teenage boys kiss, but accepting of the inevitable change to come. His honesty is deeply refreshing and when he confides in his waitress friend, Loretta (Yvonne Huff), it almost transcends cinema and becomes a direct connection to your own thoughts on those final years of our lives.

Make no mistake, Lucky is a funny, poetic, special film and it’ll become one of those hidden gems that will get under the skin of every viewer. Between harmonica playing, Spanish singing and daytime television, this man is every single one of us. He has his own experiences but we relate to him. We recognise what he is going through and, when the chips are down and we’re facing those pearly gates, we’re on our own. Thankfully when we reach the end, Lucky ends on a high, with an unforgettable moment that’ll stick with you for years to come.