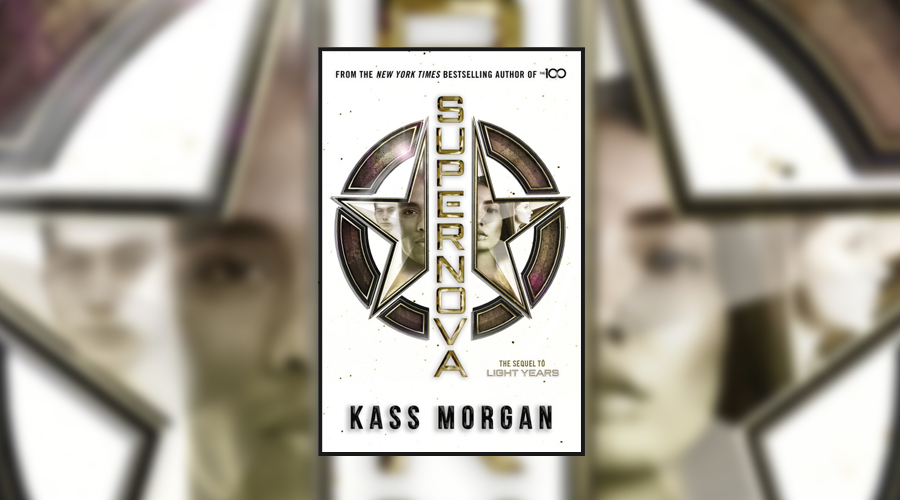 Last year, Kass Morgan released the first book in her new Light Years series, and while there was a lot to like about it, it did feel very much like the beginning of something – a world with a lot of promise and a lot more still to explore. In Supernova Kass Morgan has indeed expanded that world, growing from a story about the Quatra Fleet Academy in transition to a galaxy on the brink of war, and delivered another action-packed, quick-paced adventure-romance story you’ll be happy to spend an evening losing yourself in.

Picking up where the first book left off, Supernova wastes no time before launching straight into the action and easily hooks the reader back into the world of Quadra Fleet Academy and the lives of the members of Squadron 20. With tensions rising and war on the horizon, loyalties and relationships are tested in book two as Orelia, Vesper, Arran and Cormak are forced to reconsider everything they thought they once knew.

Orelia has been arrested, exposed as the Sylvan spy she is, and she’s facing a terrible future in jail or worse until the Quatrans make her an interesting offer, while Arran finds some comfort in his break-up with Ward when he gets closer to a boy from Loos, who has his own ideas about challenging authority. Meanwhile, with Cormak and Vesper’s relationship back on track, Cormak’s world threatens to fall down around him when a secret that could cost him everything is uncovered and used against him, while Vesper’s ambition and drive is challenged by the discovery of a deep-rooted conspiracy – and its potentially deadly consequences.

“Looking into his strangely cold eyes, she realised it was over; there was nothing she could do to protect herself now.”

With four characters to focus on and four perspectives driving the narrative, no one can accuse this novel of being a slow burn. Chapters are short and punchy, packing plenty of plot and new character interactions into each POV, even if that also means that there’s rarely time to delve too deeply into anything. Inevitably, with four different strands to follow, there will be a character or storyline that draws readers in more than the others, and whether you’re interested in romance, conspiracy thrillers or espionage and politics, there will be something for your tastes here. What’s particularly commendable is that none of these things feel separate from the story as a whole either. No matter what happens to these four core characters as individuals, Morgan never loses sight of the overall story and Supernova is all the more engaging for it.

If Light Years was a warm-up, then Supernova is most definitely a main show worth waiting for. Yet despite a meatier narrative with higher stakes, it still struggles with some of the same issues as its predecessor. Supernova fully embraces its Star Wars links, scaling up the drama from Light Years’ high school tensions to explore the grander scope of a galaxy at war – complete with political machinations, mutinies and plenty of subterfuge – but it still only sketches over what could have been a very rich history, and it rushes towards the introduction of a final threat that felt both somewhat simplistic to begin with and too easily solved.

But while it would have been nice to see a bit more nuance in Supernova, there’s no denying that it is generally a gripping read with characters to care about, relationships to invest in and a new world worth exploring. Those looking for hidden depths and shock twists will probably be left disappointed by this largely by-the-numbers YA sci-fi fantasy, but Kass Morgan’s latest novel is a shot of pure escapism, plain and simple, delivering action, romance and adventure in spades and making for a truly satisfying read.

Supernova is published by Hodder on 1 October 2019