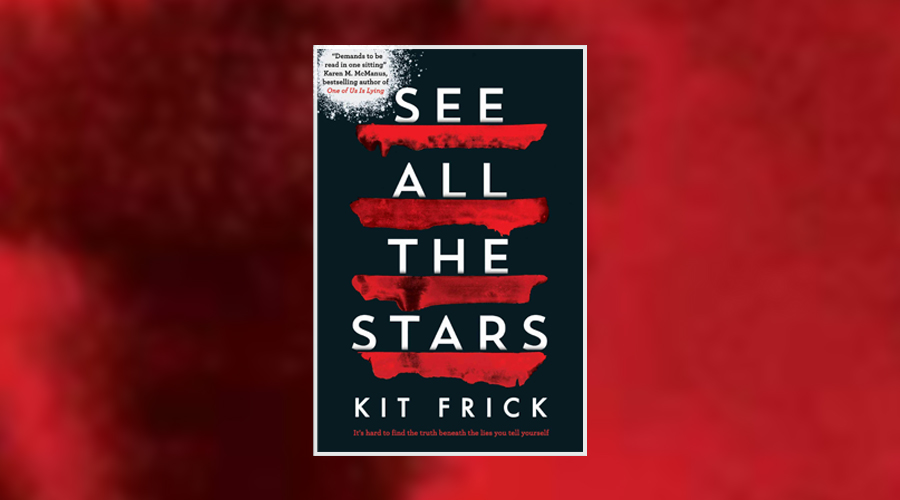 With two books published within months of each other this year, Kit Frick has officially arrived on the UK YA scene. Her debut, See All The Stars, is a suspense driven page-turner that immediately sets the scene for a friendship gone sour. The mystery for readers is trying to unravel the deception that turned four best friends into enemies.

Shifting between Then and Now, we meet our central quartet: Ellory, Ret, Bex and Jenni. In the past, the four girls are like planets revolving around each other and at the centre of their galaxy is Ret, the bright sun that gives them all life. In the present, Ellory is alone. She’s broken up with her boyfriend and she’s a social pariah who’s ridiculed and tormented by her classmates. She’s also no longer friends with Ret, Bex and Jenni – their once tight-knit group shattered by a shocking moment that changed their lives forever.

Ellory refers to this devastating moment right from the beginning but it’s vague, something she flashes back to when she recalls a particular day or event from the past. It’s always on the periphery of the story, like a dark, foreboding shadow following Ellory around, but we don’t know for certain what happened. If you’re perceptive, you’ll pick up on the breadcrumbs Frick scatters, which allude to the reason why Ellory is wracked with both guilt and fury.

“The facts – what she did, how she lied – were immediately lost in what followed. In the end, who hurt who didn’t matter. The result was the same: the four of us split down the seams and a world of pain in my heart.”

Frick invites us into Ellory’s world when it’s still full of light and promise. The girls are young, beautiful and popular, with their whole lives ahead of them. Yet there’s something uncomfortable lurking below the surface. Ret constantly plays Ellory and Jenni off each other, making them vie for her attention. Their devotion towards Ret feels unnatural but it’s clear that she needs their adulation to fuel her own insecurities. Bex is different. She doesn’t require Ret’s constant approval like the other two do, but even she is drawn into the drama eventually.

The non-linear narrative creates a real sense of tension and suspense as we get closer and closer to discovering what actually happened to the girls. It’s a clever way of weaving the different threads of the story together and though I had a sense of the twist before it happened, it didn’t dampen the emotional effect it had on me. I was genuinely on the edge of my seat towards the end, as Ellory’s secrets and intimate regrets finally came tumbling out.

See All The Stars is a complex, absorbing and redemptive story of love, betrayal and toxic relationships. It’s also a tale of being young, making mistakes and learning to forgive yourself. As readers, we might not have been through the same traumas that plague Ellory throughout this book but many of her struggles are universal. It gives Frick’s novel an added layer of poignancy that sets See All The Stars apart from your average contemporary YA mystery.