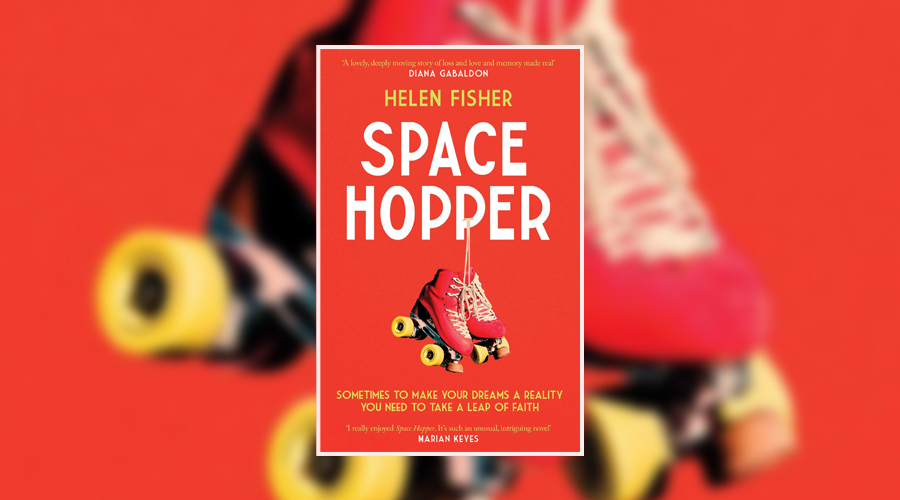 What would you do if you had the opportunity to travel back into the past and spend time with a lost loved one? Would you be strong-willed enough to resist such an enticing, heart-string-tugging opportunity? Or would you blindly leap into the unknown, understanding that there could very well be a butterfly effect that you might not be able to undo? That’s the conundrum at the heart of Helen Fisher’s debut, Space Hopper, which follows a woman who discovers that she has a way of tumbling back through time to visit her mother who died when she was a child.

Faye is perfectly happy with her life. She is a devoted mother to her two daughters and has an equally devoted husband, who has recently answered a ‘calling’ from God and decided to become a vicar. The only thing Faye is really missing in her life is the presence of her mother, and the loss she feels all these years later still lingers. Faye never had a chance to say goodbye – one day her beautiful, fun and free-spirited mother was there, and the next she was gone. So when Faye finds she can travel back to the 1970s – to a moment in time just before her mother died – she uses the extraordinary opportunity to seek the answers to all the questions that have plagued her ever since.

As you might expect, Faye’s journey into the past is a shock to her system, both physically and emotionally. Once she gets over the initial bone rattling crash through time, which lands her in a garden shed with an almighty bump, she’s presented with her life as an eight-year-old. At first she merely observes from a distance her younger self and her mother interacting. She sees them laughing, playing and, most of all, living. She yearns to speak to her mother, to be close to her and a part of her small world, and eventually the temptation is too much for Faye to resist. But the more time she spends with her mother in the past, the more she risks everything she loves in the present.

“I’d considered myself a more naturally cautious person; why was I risking everything I had? My expeditions to the past were always tinged with the fear of not being able to get back, and yet the addiction to return was physical, emotional and consuming.”

From Outlander to The Time Traveller’s Wife to About Time, we’ve had plenty of books and films about people journeying through time and the ripple effects it can cause. Yet we’ve never had a time travel story quite like Helen Fisher’s Space Hopper – which uses the titular retro rubber ball box as a portal for its central character to time hop through. It’s certainly an inventive Alice in Wonderland-esque way of giving Faye a way to access her lost childhood and it instantly creates a sense of nostalgia that paves the way for Faye’s journey back to the 70’s.

Space Hopper is an incredibly moving, bittersweet and perceptive novel that circles around the question of what we would all do if we were given the chance to visit people we’ve loved and lost. Faye doesn’t seek out time travel; it’s purely accidental, and scary and mystifying at the same time. Yet it’s also an unexpected gift – a way for her to delve into what happened to her mother and why she never said goodbye. The story is ultimately about the unique love between a child and a mother – an emotional pull so strong that it defies logic, and in this case space and time too.

Fisher packs her debut with all the happiness, sorrow and internal-conflict that any of us would experience if we were in Faye’s position. The first person narrative puts readers firmly in Faye’s shoes – we live every thought, feeling and agonising choice as if they are our own. You can absolutely empathise with how conflicted she feels about not wanting to let her mother go but knowing that by trying to stop the inevitable from happening, she could irrevocably alter a present life that she actually wouldn’t change for the world.

Space Hopper is a novel about faith, love, loss and learning to let go. You’ll need to whole-heartedly suspend disbelief to really get on board with the story but once you do, you’ll be rewarded with a profound book that makes you think, makes you feel and makes you grateful for the family and friends you have around you.

Space Hopper was published by Simon & Schuster on 4 February 2021