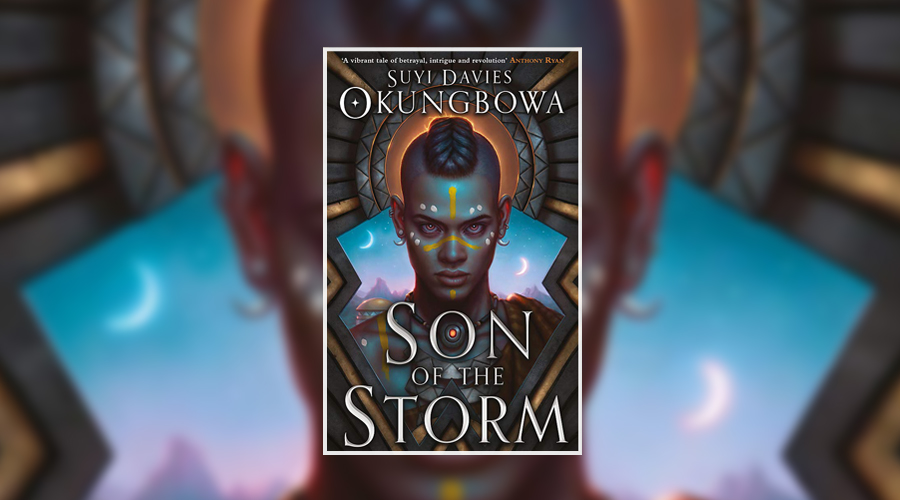 Son of the Storm is an epic fantasy in which history’s victors have built a thriving city, Bassa, and a narrative that all outside the domain of the Bassai are either lesser people or non-existent. Neither proves to be accurate, as an inquisitive scholar, Danso, his power-driven intended, Esheme, and a supposedly mythical, magic wiedling islander, Lilong, each reveal that what they have to learned to be true does not have to remain so.

As they each embark on their own quests, the nature of power and its complexities are shown as they explore the ways in which they can change their societies. And in doing so change their lives, forever. Suyi Davies Okungbowa has created an intricate and grounded world which is imbued with lessons about who decides what historical events are, who keeps societies running and unbalanced, and how we create change with every choice we make.

Although this novel takes the perspectives of a handful of intermingled characters, it is focused most on Danso, Esheme and Lilong. Through Danso, the idea of his place in society as a person of mixed heritage reveals much about how Bassai society is structured. He longs for a life beyond the city and his rebellious desire to do so leads him to secrets about his home, and then to Lilong. With Lilong, we get the outsider perspective as she views Danso, his Second Zaq, and the people of Bassa as enemies. Her magic reveals more fantastical elements and offers a glimpse of what more there is beyond the continent in which Bassa resides. She is an agile warrior who uses her stone-bone and dagger in acrobatic and deadly displays that thrill.

Last, but not least, with Esheme, we see the growth from someone who understands her unideal place in society. She has barely accepted it but believes it is important to be prepared. Her sharp mind and desire for more means that when an opportunity to step up falls in front of her, she not only runs with it but exceeds the limits that others would see. Through Esheme we learn how the political leaders, at all levels and castes, in the city operate, including the cruelty and brutality that it takes to take power and hold on to it by sheer force of will.

With these three core characters and a handful of others – a particular favourite is Biemwensé, who appears in the latter part of the novel – Okungbowa explores the depth and breadth of the city of Bassa, out into the wilds of the Breathing Forest, across to the protectorate of Whudasha and beyond. It’s an exciting new world, and there’s even more waiting in the wings.

There are so many complexities and nuances to the world of Son of the Storm, yet it never feels bogged down in trivia. The story flows, taking new paths and building on what is known and revealing fresh details in satisfying ways. It takes a slow run up but soon evolves into a story that’s part action adventure and part political thriller, culminating in a dramatic conclusion that is also the start of the larger series.

Fans of epic fantasy books will love jumping into this new world, particularly if they are looking for a West African or Nigerian influenced story. Engaging, exciting and bold, Son of the Storm is also one for those who love strong rules, a great magic system and a myriad of possibilities as the series continues.