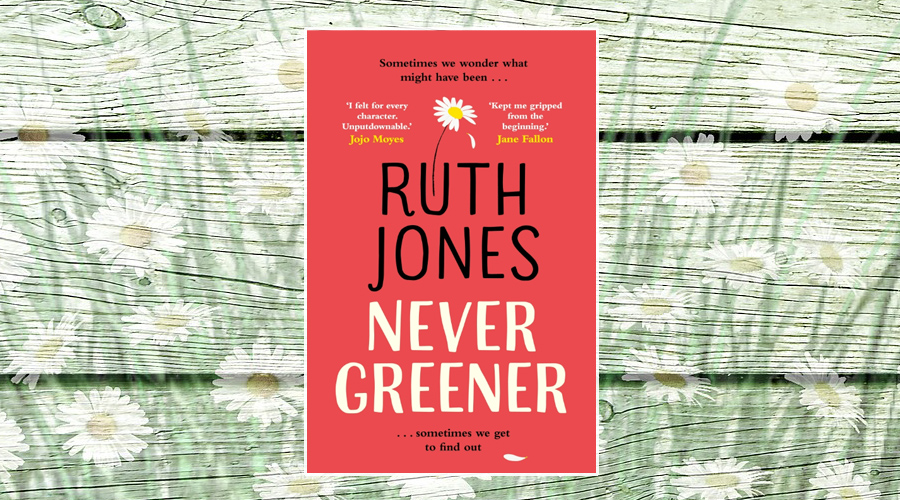 In 1985, Callum and Kate meet whilst working at his brother’s bar. She is half his age, and he is expecting a third child with his loving wife, yet the two strangers immediately fall into bed. They remain there until they’re discovered and forced apart, assuming they’ll never see each other again.

It’s 2012, and Kate is now a famous actress. She is asked to give a talk at her old primary school, where Callum is a teacher. Seventeen years have gone by, but it doesn’t take them long to fall back into their old, illicit routine. Though they are both happily married, Kate and Callum are determined to see what might have happened if they’d never ended their relationship. As you might expect, human wreckage ensues.

Never Greener is the first novel from Ruth Jones, who’s best known for her writing and acting in sitcoms Gavin & Stacey and Stella. In both programmes, Jones has proven her writing ability. Unfortunately, Never Greener doesn’t emulate her televisual prowess.

You don’t need a likeable protagonist to have a successful work of fiction, but you do need an interesting one. Kate and Callum are neither likeable nor interesting. There is nothing to their dalliance except sex. They don’t connect on some deep level, they don’t have profound conversations, they don’t fill the gaps in each other’s lives in any way. It’s just sex, and that makes for tiresome reading.

Individually, their characters are no more compelling, particularly Callum, who is just an endlessly repeating cycle of guilt. There are pages and pages of him feeling awful about what he has done, and then he sees Kate in some form of underwear and gives in again. This happens in almost every chapter written from Callum’s point of view, and it is maddeningly dull.

Luckily, it is not just Callum and Kate whose perspectives we witness the story through, but their respective partners, Belinda and Matt. It’s these chapters that make Never Greener just about bearable. Belinda doesn’t have much of a life outside of Callum, but Matt does outside Kate, and he emerges as the most engaging figure. He and Hetty, a friend from University who is having her own romantic troubles, are the only characters rounded enough to feel anything for.

Ultimately though, it’s the transparent pointlessness of the affair that weighs Never Greener down. Even if the central message was not contained within the title (wouldn’t you know it, the grass isn’t greener on the other side?), at no point do you question whether Callum and Kate should have stayed together in 1985. It’s obvious that at some point their relationship is going to be found out, and it’s hard to be invested in what the fallout of that is going to be. That leaves you with nothing to do but wait for this discovery to happen whilst gritting your teeth through more close shaves and more of Callum’s ceaseless guilt. By the time I’d reached the end of the novel’s 400 pages, I felt nothing but relief.

Though Jones’ debut has its moments, her wearisome protagonists and a flat story make Never Greener a chore to get through.

Never Greener is published by Bantam Press on 5 April 2018