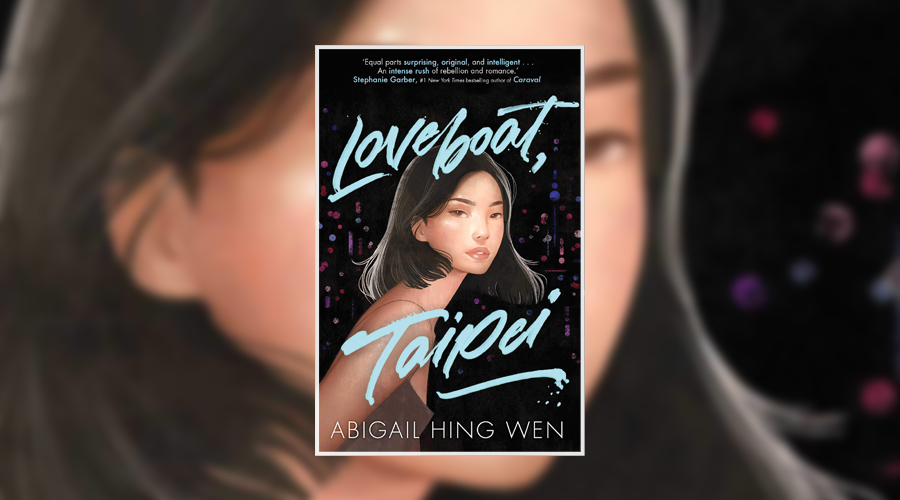 Abigail Hing Wen’s debut novel Loveboat, Taipei is not a book readers will forget in a hurry. Pitched as Crazy Rich Asians meets Gossip Girl, this book soon met the promise of those narrative beats and then some, exploring a world full of over-achieving, often-rich teens in a summer school with minimal adult supervision as they navigate messy relationships and weighty family expectations at a critical juncture in their lives. And, best of all, it does so effortlessly, offering readers a gripping and immersive entry point into a dazzling new world, all of which is grounded by a character that readers are rooting for from the very first chapter.

When 18-year-old Ever Wong’s parents sign her up for a summer programme studying Mandarin in Taiwan, it’s the last thing she wants to do. With a place on a pre-med course waiting for her when she returns, all Ever wants to do is spend the summer dancing before she has to give it up to focus on becoming a doctor. But when Ever arrives in Taipei, surrounded by the kind of brilliant, high-achievers her parents have always wanted her to be, she quickly learns that the Chien Tan programme has a nickname among the teens: Loveboat.

Ever’s vision of a strict educational regime quickly goes by the wayside as she gets caught up in Loveboat’s promise of a summer free-for-all, featuring plenty of hook-ups, nights out clubbing and a chance to let loose. Encouraged by her roommate Sophie Ha, Ever soon sees this summer as an opportunity to break every strict Wong family rule she’s had to live by all her life – and learns a little something about who she is and who she wants to be along the way.

‘This summer, I’m breaking all the Wong rules.'”

When we first meet Ever, she’s very much at a crossroads in her life, torn between following the path her parents want for her – therefore making their sacrifices for her future worth it – and following her own dreams of being a dancer. It’s a pretty universal theme among coming-of-age novels, but as an Own Voices novel, Abigail Hing Wen also digs deep into immigrant families and the extra expectations placed on the children of those families, exploring the complex dynamics of culture and family alongside the age-old stories of self-discovery and first love. It sounds like a tricky balance to manage, but Wen handles everything beautifully, deftly weaving together romance and romps with reflections on community, family and culture clashes.

And Ever’s own journey of self-discovery really is a joy to read, with her determination and passion clear to see on every page, making her a very relatable, well-drawn character that you warm to instantly – which serves her in good stead when it comes to the novel’s romantic elements. It’s fair to say that the romance in Loveboat, Taipei is a complicated set of affairs and while Ever does have two main love interests throughout in the form of Rick Woo, the Yale-bound child prodigy that Ever has been measured against all her life, and brooding Xavier Yeh, Chien Tan’s resident bad boy with a reputation for being a player, this is not your typical, clean-cut love triangle and the novel is all the better for it. In this novel, as in life, each character’s feelings for others are confused, messy and overlapping, and Ever doesn’t always handle things in the best way. But, rather than being frustrating, this only makes Ever all the more human.

Yes, there are times when the novel introduces some big issues and doesn’t really seem to know where to take them, including scenes that, while handled sensitively, ultimately become more about being another challenge for characters to face and overcome rather than exploring any real fallout or wider-reaching implications. But Loveboat, Taipei is not a book that should be defined by its high drama and shocking developments (which are, admittedly, rare); instead, it’s a story about striking out and learning who you are and, despite clocking in at a fairly hefty 414 pages, the biggest compliment I can give Loveboat, Taipei is that it still didn’t feel long enough.

I could have easily spent so much longer in the company of these characters and their whirlwind summer – messy romantic entanglements, low points, triumphs and all – and, more particularly, so much more time with Ever as she grew in confidence, fell in lust and love and began to find the courage to pursue the future that she wants. In her debut novel Abigail Hing Wen has delivered a compassionate, thought-provoking and, above all else, fun read that all fans of YA contemporary novels are sure to enjoy.

Loveboat, Taipei is published by Simon & Schuster Children’s on 7 January 2020