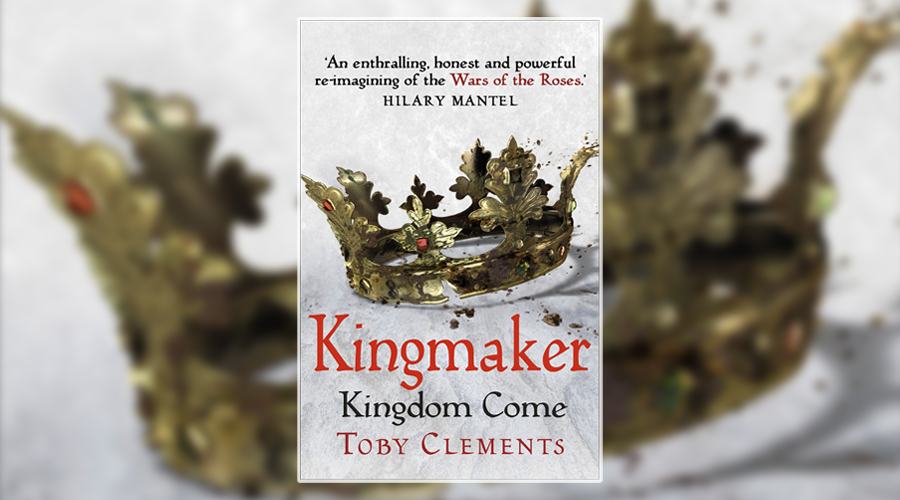 The dreaded time has arrived. Nope, not Christmas – it’s now 1470 and the time of the fourth and final book in Toby Clements’ Kingmaker series. At the end of the last book Thomas and Catherine had found momentary peace but it was as short lived, as Thomas had known it would be. He has done his best to secure a good stable home for his family and friends but the Wars of the Roses are ongoing and politicians and spies are still seeking their precious ledger – the one that has already brought them so much trouble because it could decide whether Edward is a legitimate heir to the throne or not.

Katherine thinks she may have found a solution to the problem but in a cruel twist of fate Thomas says a few wrong words to the wrong person and they soon find themselves evicted from their home. They then have to wander England again in search of solace, truth, help and a new home. Their subsequent journey sees them trudging across a cold, wet and muddy England and on to Holland, watching their friends and loved ones die and unable to do anything to help.

This final book is filled with as many quests and battles and as much bloodthirstiness as the previous three but there is a big difference this time. Far from being battle hardened, Thomas is now weary of it all. A peaceful man at heart, he wants nothing more than to live quietly with his family and friends but those spies and politicians just won’t leave him alone. This story really is a heart-rending tale. Thomas and Katherine have seen so much strife and suffering in their lives, it’s easy to forget they are still only young. The sense of the utter bone weariness they are all feeling shines through in the writing and also the resoluteness that they will stop this at all costs. That resoluteness builds for both of them as the story progresses.

Kingdom Come is as brilliantly written as its predecessors, with rich and meticulous description that transports you back to a time when life was far crueller than today. I’ve learnt so much about life in the 15th Century by reading this series. Toby Clements’ research is so detailed and his characters so well drawn that it becomes easy to think the way they do and feel their fears and insecurities. Thomas and Katherine may mix with royalty but their story is that of the common people they live side by side with and they are far more interesting than the pampered royals they have to serve. Their relationship suffers at times as life gets increasingly hard but somehow they stay together. Overall their whole story has been so compelling I still can’t understand why this hasn’t been commissioned as a film or TV series.

This was a magnificent finale to the series and I was pleased that although I’m not likely to read about these characters again, there are just a few loose ends remaining – just in case.

Kingmaker: Kingdom Come is out in hardcover now. It will be published in paperback by Arrow on 25 January 2018.