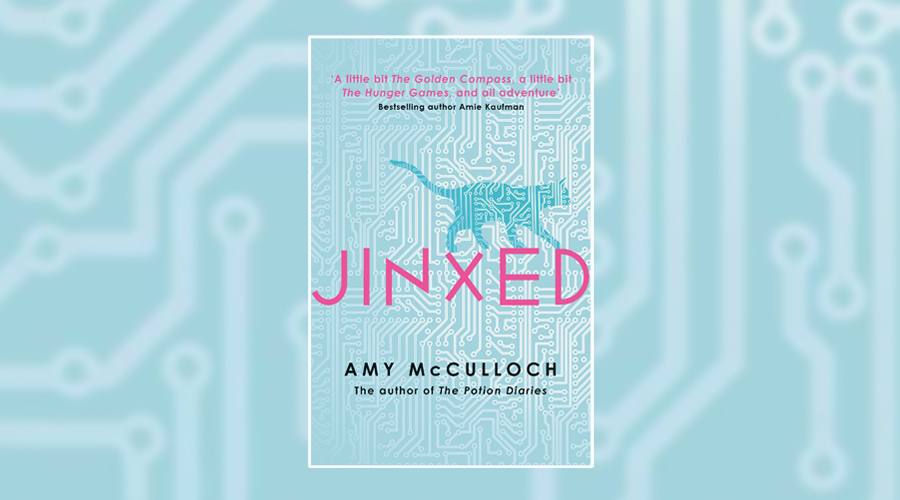 “What if our smartphones were more than just slabs of metal and glass in our pockets? What if they were actual creatures that could keep you company as well as keep you connected?” That’s the unique and inventive idea at the centre of Amy McCulloch’s latest YA novel, Jinxed – a story that transports readers to a technologically advanced near-future where people own innovative digital pet robot companions called bakus.

Fifteen-year-old Lacey Chu has always dreamt of becoming a companioneer for MONCHA, the pioneering tech firm behind the baku creation. However, her long-held hopes are dashed when she gets a rejection letter from the elite tech academy Profectus – her one shot at making her aspirations come true. An acceptance into the academy would have enabled Lacey to choose an advanced baku, but instead she’s stuck with a lowly insect – a sign of not only her family’s status but of her personal failure.

When Lacey accidentally comes across the remains of an advanced but near-on-destroyed baku in the shape of a cat, she takes it home and sets about trying to fix it. Weeks later, the miraculously mended baku comes to life and Lacey’s world instantly changes. Not only does she suddenly receive an acceptance letter to Profectus, but she also begins to discover that the baku – who she calls Jinx – is much more than meets the eye; unlike other bakus, he seems to have a mind of his own, and he’s about to cause more than a little trouble for his new owner.

Set in Toronto, Jinxed is a fun and exciting story that plays on our smartphone addictions and the potential dangers of AI technology, as well as the idea that advanced tech can be used as a force for good; for companionship, navigation or in healthcare, for example. McCulloch makes her baku world entirely plausible, rooting it in the familiar but making the tech smarter and much more ground-breaking than anything Apple have to offer.

It’s refreshing to see a story told from the perspective of a smart and ambitious teenage girl who’s passionate about STEM fields, specifically engineering. Lacey is the heroine teenage girls need in this day and age, one who can be both vulnerable and tough, who fights for what she wants and constantly pushes herself to do and be better. She’s accompanied by other intelligent girls: her super coder best friend Zora and her teammate at Profectus, Ashley. They might not get much page time to breathe or grow but McCulloch’s message is clear: it’s cool to be interested in science and technology, and we should be encouraging young girls to enter these fields.

The bakus themselves are amazing creations and it’s impossible not to read this book and yearn for one of your own. Whether it’s a low-level scarab beetle or an advanced eagle, these digital creatures feel every bit like living, breathing animals. Jinx, in particular, is a fully-fledged character and his bond with Lacey is as heartening as it is intriguing. When the baku battles take place at Profectus, the action is pacey and breathless; a ruthless arena-like setting that could rival The Hunger Games.

Some elements of the story don’t work so well, mainly the see-it-coming-a-mile-away romance between Lacey and her aloof classmate Tobias, which rides from one cliché to the next. Yet the hints at future arcs surrounding Lacey’s mysteriously absent Dad and the corruption at the heart of MONCHA are enough to override any failings, building anticipation for the sequel.

Original, entertaining and intelligent, Jinxed is the kind of novel you’ll bury your nose in and not raise your head until you’ve devoured every page. I’ve no doubt it’ll be just as popular as McCulloch’s The Potion Diaries series.