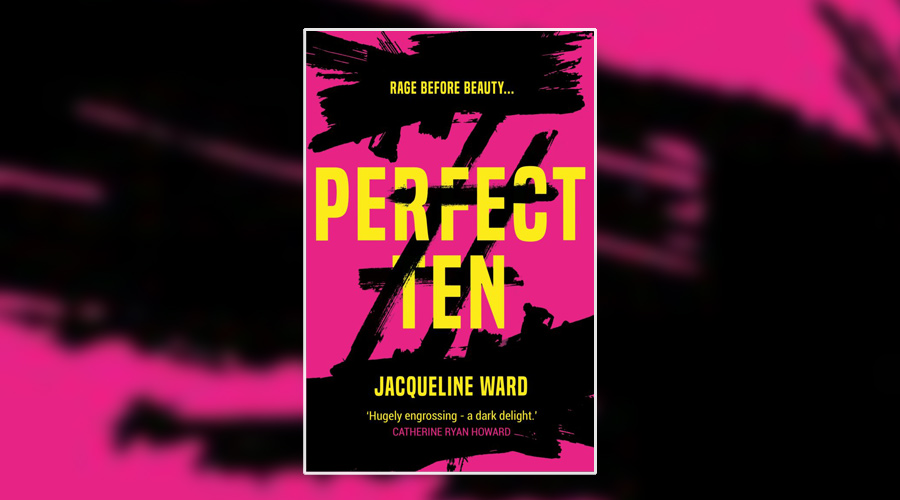 It’s been a year since Caroline’s messy divorce from her philandering husband, Jack. She’s had a miserable time of it. He cheated on her with multiple women. He made all their friends think she was mad. He took her children away.

So when Caroline receives luggage meant for Jack, she’s curious. And she finds a goldmine. A journal, noting all of the women Jack had sex with, and rating them out of ten. There are pictures too. Seeing her chance to get even, and more importantly, get her children back, Caroline embarks on a dangerous quest for revenge. A quest that is destined to leave fury and chaos in her wake.

Perfect Ten is written in a gossipy first person with forays into the second; we are dropped right into Caroline’s crazy world, where she directs her ire straight at her ex-husband (‘You made me doubt my own sanity’, ‘You fucked them in our bed’). It’s an interesting device, and it works pretty well. The biggest strength of the novel is the propulsive plot, and the style of narration adds to that directness. It’s confrontational and brash, and that goes a way towards distracting from the deficiencies here.

The problem with this narration is that it invites repetition. We are enmeshed in the inner dialogue of a frantic, furious woman, and she returns to the same thoughts over and over. She justifies herself; she wonders if she’s going too far; she decides that the crimes of her ex and his mistresses areworth the punishments she’s meting out. After all, she’s doing this for her children. Rinse and repeat, the cycle is unending. Though the action is commendably pacy, the dialogue Caroline has with herself remains an unnecessary drag on proceedings.

The action may be compelling, but it’s also completely unrealistic. Author Jacqueline Ward asks us to believe that the feud between Caroline and Jack becomes a national story. They are frequent topics on breakfast news; wristbands are sold with #teamcaro and #teamjack. As with several other aspects of the book (that the police would dedicate so much time to such an unimportant case, that Caro could win an enormous grant for a project when she’s so distracted by revenge), it’s utterly implausible.

It doesn’t help that the characterisation is so weak. We spend more than three hundred pages inside the head of Caroline Atkinson, and we never learn anything about her. She’s a psychologist, she has two kids, she has a terrible ex-husband. We know these limited facts early on in the novel, and we don’t discover anything more. As such, Perfect Ten fails to develop the specificity that distinguishes these ten-a-penny thrillers from the many others published every month. Whilst it’s engrossing in the moment, there’s nothing special or noteworthy enough here to make it stand out from the crowd.

Perfect Ten is trashy fun; it’s the sort of book you easily devour in a few sittings, then struggle to remember anything about the following week. It’s not exactly the new Gone Girl, but it passes the time.

Perfect Ten is published by Corvus on 6 September 2018