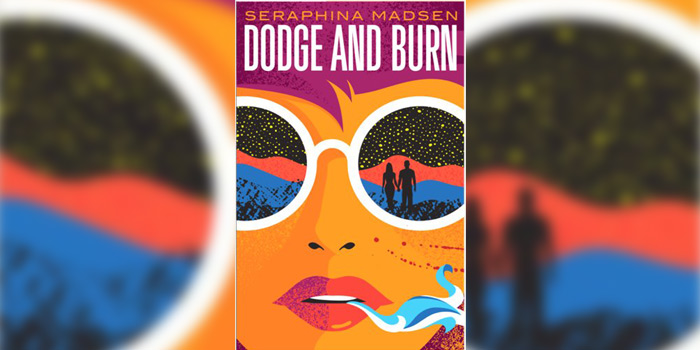 A psychedelic road trip. A blurred line between reality and fantasy. A dream, “just a dream”. Dodge and Burn is all of these things and more, being as it is a forage into magical realism and a truly extraordinary story that covers cities, continents, and even planes of existence.

At its core, this novel is about missing heiress Eugenie Lund who, along with her sister Camille, was taken in (or possibly kidnapped) by an eccentric and mysterious man named Dr Vargas after their mother was killed by killer bees in Mexico when they were attracted to the smell of her perfume. Yeah, it’s that kind of story. Growing up in the wilds of Maine, Eugenie is seemingly subject to torture and classical conditioning treatments as Vargas teaches science and survivalism and to cope, she and her sister turn to the spiritual world, complete with potions, omens and rituals as they continually seek ways of escaping their lives.

Jump forward a few years and Genie is married to a Frenchman named Benoît, scamming Las Vegas casinos out of cash and never giving up hope she’ll be reunited with Camille after the pair were separated in their escape from Vargas. Between drug trips, raves and cabins in the middle of nowhere, Genie relies on her mystic beliefs and experiences to guide her through the best and worst of times, be they snake bites, a Mothman or even the end of the world.

By its very nature, Dodge and Burn is quite a hard book to get into, and difficult to drop in and out of if you spread the reading across a few sittings. Eugenie isn’t a reliable narrator, driven by her self-taught mysticism and her excessive drug use and it doesn’t help that her new husband goes along with her quirks and predictions without question.

The characters are flighty, and predominantly seen through Genie’s distorted vision and, as it’s rare to pin down a section of this novel throughout which she’s not high on meds or drugs or poisonous flower concoctions she’s put together herself, also not to be trusted. Her husband rarely extends beyond the role of confidant and driver, usually either on a high himself or coming down from one. Dr Vargas is a caricature of a mad scientist, jumping between hypotheses, experiments and mad schemes, while Camille, when she’s described at all, seems to always be more spiritual being and walking encyclopedia of religious, mythical knowledge than person.

The only grounding influence we do get is in the cutaways to a man name Maynard in the woods of Maine, who’s found Eugenie’s journals and, being reminded of the news reports of the missing heiress, spends time trying to piece together the story – and is more linked to Eugenie and her history than even he knows.

So what we’re left with is a highly transgressive tale – but a memorable one nonetheless. The voice is a bold and persuasive one, so that even though a lot of what Eugenie says is incredible and unbelievable, you almost want to go along with it. It’s also a voice and a novel that leaves you with the distinct impression that what we’re hearing about may not necessarily be real, which means that Dodge and Burn treads a careful line between surrealism and truth, and it’s up to the reader to decide which prevails.

Unfortunately, the one thing that could be taken as truth is a rushed, throwaway line in the final pages of the novel, leaving no time for any real conclusions to be drawn, or any aftermath to be felt. Is Eugenie insane, or not? Is she suffering from an extreme case of PTSD, or not? Is she lucid, in control and choosing to numb her pain through drug trips, or not? These are all questions we’re left with at the close of this novel, which, while frustrating, makes it a hard one to forget.

Dodge and Burn is a compelling, if jarring, read, but the journey Eugenie goes on is a fascinating one to follow – as long as you allow yourself the time to adjust to this brave new world you’ve found yourself in.