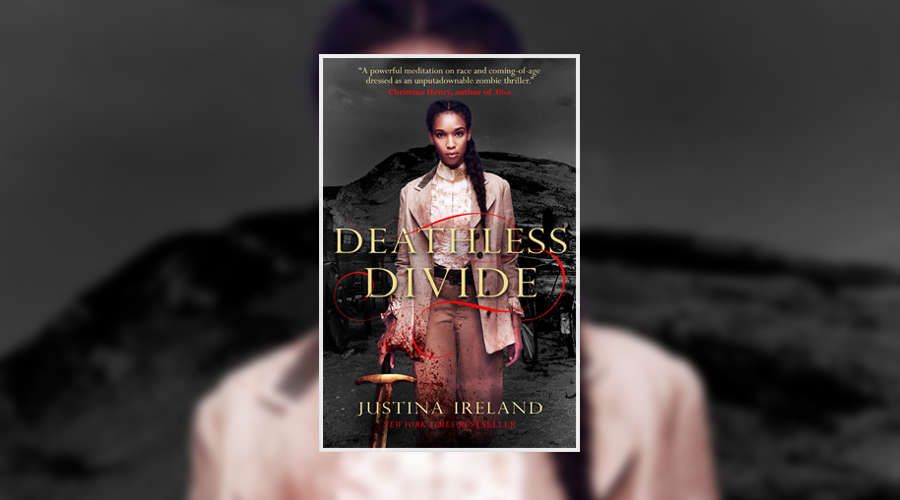 Just five chapters into Deathless Divide – the sequel to last year’s crossover historical fantasy Dread Nation – and it’s clear Justina Ireland has absolutely no qualms about throwing just about any shocking curveball at her readers. And what a curveball this opener is, altering the whole nature of protagonist Jane’s merciless mission to purge 1880’s America of shamblers. The Jane McKeene we meet here is more ferocious, more unforgiving and even more determined to wreak vengeance on both the restless dead and the living. And, once again, she’s one hell of a character to journey with through an apocalypse-ravaged land.

Whilst Dread Nation was solely Jane’s story, Deathless Divide shares the POV between Jane and her once-nemesis-turned-loyal-ally Katherine ‘Kate’ Deveraux. We pick up the story after the fall of Summerland, as Jane, Katherine and their motley crew of fighters and innocents travel towards a village called Nicodemus in search of a safe haven. But this refuge – with its tall walls that keep out the dead and its seemingly more tolerant society – isn’t quite the protected sanctuary they were hoping for. Like Summerland, it’s hiding secrets, scoundrels and scientific experiments that are doomed to fail.

Dragged through hell and sent on a dark path of blood and vengeance, Jane must battle to hold onto her humanity, whilst the world continues to crumble around her. Meanwhile, Katherine is determined not to let the darkness claim the one person who’s mostly always, often grudgingly, had her back. Together or apart, these are two fierce women who refuse to adhere to the lives and roles they were born into. Both Jane and Katherine have changed since the first book – how could they not after all they’ve been through? – and the constant uncertainty over their fates makes for a thrilling, albeit nerve-racking read.

“And so, I have a choice: love or vengeance. But it’s a decision I’ve already made, and one I keep making with each scoundrel I kill.”

For fans of Dread Nation, Katherine was a standout character who held her own against the formidable Jane. By giving Katherine her own voice in this book, Ireland expands her story and gives it greater breadth; we can move beyond Jane’s limited, hot-headed viewpoint and see her actions, and the actions of those who have wronged her, from a more even-tempered perspective. Katherine always was the salve to Jane’s anger and it’s heartening to see their relationship evolve as they grow to be more like sisters than friends.

What made Dread Nation such a compelling read was it’s weaving of history and fantasy, its exploration of Native American culture and ingrained racial prejudice against the backdrop of an apocalyptic landscape. By self-admission, Ireland wanted to put Black people back into history, more specifically the American Old West. Realising that Black people were rarely the heroes of any popular narratives set during these times, Ireland has given us not just one but two Black female characters who entirely deserve the title of heroine. They make mistakes and, particularly in Jane’s case, they do some deplorable things, but Jane and Katherine are inherently decent, kind-hearted people and it’s easy to root for them both.

The only criticism that can be aimed at Deathless Divide is its rather tome-like heft. At a whopping 561 pages, it drags in the middle and feels as heavy as a sack of flour to hold. Cutting out at least a hundred of those pages would have maintained the quick pace of the first book and lost none of the emotional impact. The good news is that if you’re already invested in Jane and Katherine’s story, you’ll be willing to put up with cramping hands to find out what happens in the end. The even better news is that it absolutely doesn’t disappoint.

Deathless Divide was published by Titan Books on 4 February 2020