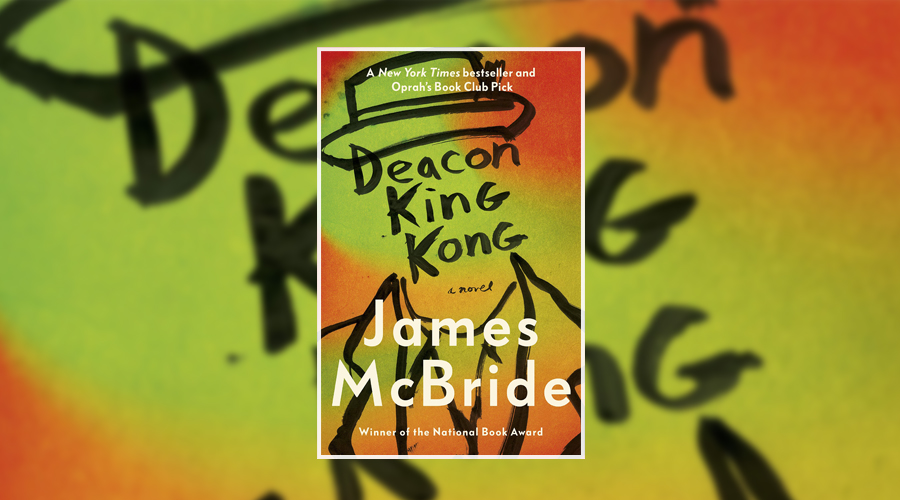 No one was expecting Cuffy Jasper Lambkin – aka Sportcoat – to walk up to Deems Clemens and shoot him in the head. There was no apparent motive. Sportcoat was Deems’s Sunday School teacher, and his baseball coach. He loved the boy. Although Deems is a man now, and a drug-dealer to boot, he hasn’t wronged Sportcoat in a way that anyone can think of.

Still, he shot him, and complicating the matter further: Deems didn’t die. Further still: Sportcoat has no recollection of shooting him. Even so, that shooting sets off a chain of events that will leave both of them, as well as the poor Brooklyn neighbourhood where they live, forever changed.

Deacon King Kong is the latest novel from National Book Award-winning author James McBride. At first, reading it is an overwhelming, sometimes baffling experience. There are so many characters, many of whom go by several different names. They all have long, complicated histories with each other – some are relatives, some friends, some business associates, some enemies. The first few chapters of McBride’s book are like being invited to a party where you don’t know anyone and you’re trying to follow all the conversations. It’s tempting to start taking notes, as if there’s going to be a quiz at the end.

Soon though, it becomes easer to get a grip on who’s who and what’s what. The complicated narrative web starts to untangle, and different, distinct storylines make themselves clear. There are treasure hunts and illicit romances, drug deals and gang wars. Multiple people are after Sportcoat, men much more dangerous than Deems, yet he’s only interested in finding the money his wife was keeping for their church – money she put away for safe-keeping, but died before she could tell anyone where.

Once you have a basic handle on the plot and the characters, you’re rewarded with access to this extraordinarily rich world and the people who dwell within. While many of them are those whom society at large has forgotten about – addicts and drunks, small-time criminals – McBride treats them with tenderness and respect. They are linked by a wild yearning: for an escape from the crime and danger that plagues their daily existence, for the love of the women who are just out of reach, for a life where they can afford to buy Christmas presents for their children without the Church’s help. That’s what they’d like, but none of it seems likely to happen any time soon. Until the day comes when that future is realised, all they can do is keep moving forward, doing the best they can, and supporting one another.

Tying together the complex narrative and the wealth of vividly drawn characters is James McBride’s luminous prose. Each sentence is a gift. Deacon King Kong is a gorgeous, vibrant, funny, moving, extraordinary novel. It couldn’t be more fitting that both the title of the final chapter and the final word of this remarkable book is: ‘beautiful’.

Deacon King Kong was published by Doubleday on 6 August 2020