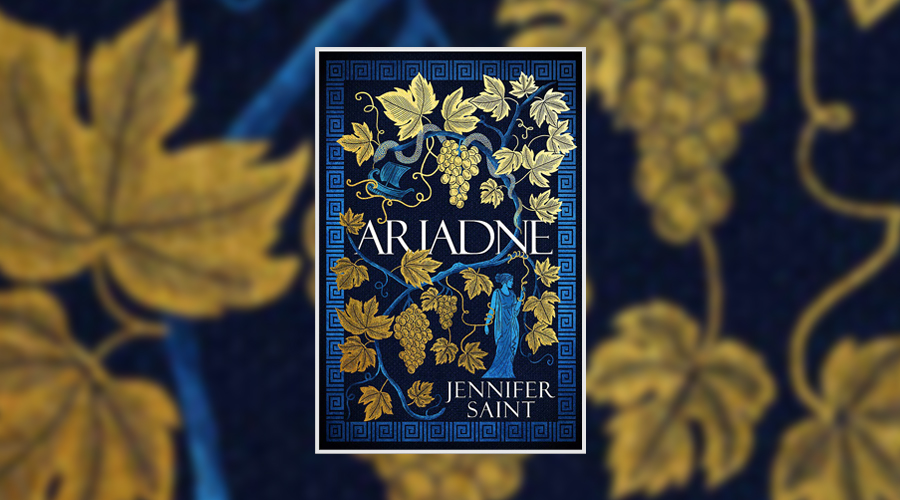 Drawing on her lifelong fascination with Ancient Greek mythology, Jennifer Saint has crafted a beautiful epic that centres on Ariadne – the daughter of the fearsome King Minos – who naively falls in love with Theseus, the Prince of Athens. As with the classic Greek tragedies, this is not a straightforward love story, as Theseus has arrived in Crete as a sacrifice to the feared Minotaur – who also happens to be Ariadne’s half-brother. The Princess of Crete faces a terrible choice: see the man she loves forfeited to the beast, or help Theseus kill the monster and in turn betray her family and country. The consequences of her decision will ricochet through the subsequent years, as Ariadne herself is deceived and forsaken.

Alongside Ariadne’s heartrending tale of love and treachery is the parallel story of her headstrong yet impulsive younger sister, Phaedra, who also learns the hard way that the only thing worse than men who crave divine power are the actual gods who wield it. Left behind when her sister escapes on Theseus’s ship, Phaedra is left wondering what happened to Ariadne. Whilst the sisters’ respective journeys take them down very different paths, the love and devotion they have for one another continues to burn bright as they grow up – leaving behind the innocence of their youth – and take on the responsibilities of marriage and motherhood.

“My story would not be one of death and suffering and sacrifice. I would take my place in the songs that would be sung about Theseus: the princess who saved him and ended the monstrosity that blighted Crete.”

The women of Ariadne are intelligent, selfless and compassionate but the world that they exist in is not a world that appreciates those qualities – especially in women. Ariadne and Phaedra are princesses and yet they are nothing more than the pawns of powerful and vain men. How often in history have women been condemned for the decisions and actions of their husbands or fathers? How often have women been wronged and misunderstood by men craving power and glory? Against an evocative mythical backdrop, Jennifer Saint explores the suffering and sacrifices of these women, revealing their immense strength, courage and collective fury. Though the book features themes of love, grief and loyalty, the very core of the story is about sisterhood and the bonds between sisters that can be stretched and crushed but never completely broken.

Saint’s story is one that I hoped would never end; indeed I could have quite happily read another 300-odd pages following the complicated relationship between the two sisters, their husbands and the squabbling gods around them. The characters, though both mythical and fictional, feel so real; both Ariadne and Phaedra are victims of their own naivety and yet every time they are knocked down, they keep rising. Saint gives them vivid, individual voices, writing them both in a kind and sympathetic light that allows readers – particularly women – to not only identify with their plights but also feel every personal blow that befalls them.

In a world ruled by temperamental, petulant gods, Ariadne and Phaedra are shining beacons of female strength and courage – making this a story that’s impossible to forget. I’m already excitedly anticipating Jennifer Saint’s next mythical retelling.

Ariadne is published by Wildfire on 29 April 2021