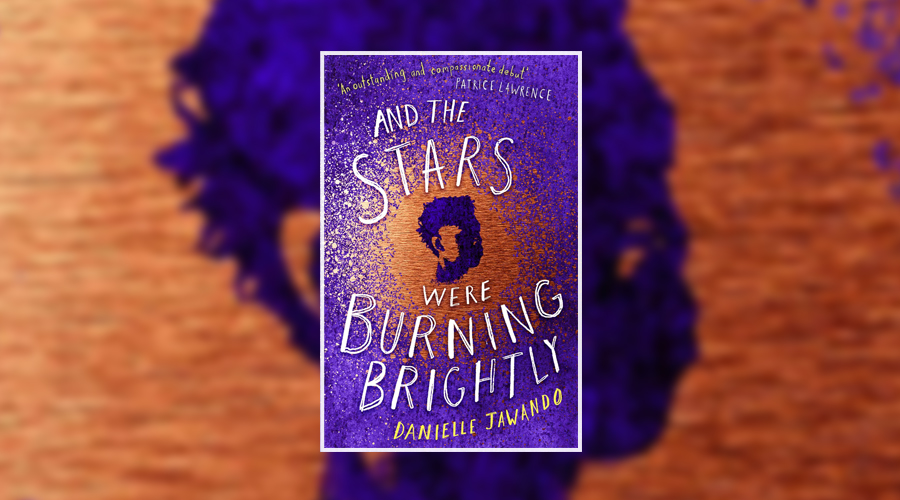 And the Stars Were Burning Brightly is a brilliant, painful, nuanced story. Al is an artistic and hopeful young black man who takes his own life, to the surprise of those closest to him. Unravelling the consequences and reasons behind his death leads Al’s brother Nathan and his friend Megan to one another. They learn more about who Al was and reflect on his impact on their lives, in ways they weren’t able to appreciate while he was alive, and delve into the mental headspace of someone who can make such a drastic choice.

This story of teen suicide is brutal and frank, like the best Young Adult literature is. It explores the difficulties young people, particularly men, have with expressing their feelings openly and asking for help. As a young, straight teenager, Nathan is an example of the modern teen who doesn’t necessarily care about someone’s sexuality, but recognises that he is living in a world where the expectations put on him about masculinity do affect how he shows affection.

Danielle Jawando uses her first hand experience of bullying to ground Burning Brightly with the swirling, struggling thoughts of someone who begins to consider suicide the only option. By focusing on Nathan and Megan, who struggle to understand what Al must have been feeling in order to end his own life, Jawando also unravels the ways in which we can be better to those who might be having a hard time and don’t feel able to share it.

There is a universality to this story, as so many teens have a hard time as they grow into themselves, but it is also the specific story of a black family on a council estate in Wythenshawe, Manchester. As we learn, Al wants to leave his home and go to university, he wants to be amazing and show the world what someone like him can do. He has a yearning to prove that being from an estate, that being black, doesn’t make him lesser, even if that is how society treats him. Britain is built on racism and it cannot be ignored. It is unacceptable to think that not only are black people treated as lesser but that we as a country have let that message permeate the lives and thinking of black children and young people growing up in 2020. Racism plays a part in the police’s investigation of Al’s suicide as well, with the assumption that Al must have been involved in selling drugs because of where he lives and the colour of his skin.

Beyond the investigation and processing of Al’s death, Nathan and Megan have to continue to face everything a teenager does. Nathan butts heads with his older brother, has to deal with school bullies, familial expectations and opening up. Megan struggles with her supposed best friend changing into someone who is cruel to her; she reflects on who she is as a person, how her social media presence reflects that and why the teenagers around her buy into the version of self that is forced upon them by adult beauty brands and celebrity influencers online.

The dark side of social media and the internet play a crucial, devastating role in what leads to Al’s death and reminds us that those growing up in the digital age are experiencing a whole new way of bullying. In one way, And the Stars Were Burning Brightly is very easy to read. It’s written in digestible chapters and moves at a good pace. Yet, because of the subject matter, especially if you have also had suicidal thoughts, it can feel incredibly hard to revisit those feelings, even through someone else. This speaks to the quality of Jawando’s writing, which invokes the thought processes of someone with suicidal thoughts and how someone can appear fine from the outside but be in turmoil and pain on the inside.

Al’s world view, as shared by excerpts of his thoughts included at the start of each chapter, is hopeful and considered. He encompasses vuja de, the idea of being able to see the same thing, something ordinary, over and over again, then finding a new perspective. He teaches Nathan and Megan to look around them and really see what is there, to find the beauty in what others don’t. This becomes his motif and is showcased in his artworks – even their descriptions alone make you see and feel what is being inspired.

Book Review: When Our Worlds Collided by Danielle Jawando

And the Stars Were Burning Brightly is an excellent book, a great addition to modern YA and a powerful read for older teens and adults alike.

The following organisations offer support to anyone who is dealing with any of the issues and topics mentioned in this book: Bullying UK (a confidential helpline for children, young adults and parents) Tel: 0808 800 2222, Web: www.bullying.co.uk, and Samaritans (24hrs helpline for suicide prevention) Tel: 116 123, Web: www.samaritans.org.uk.

Book Review: When Our Worlds Collided by Danielle Jawando