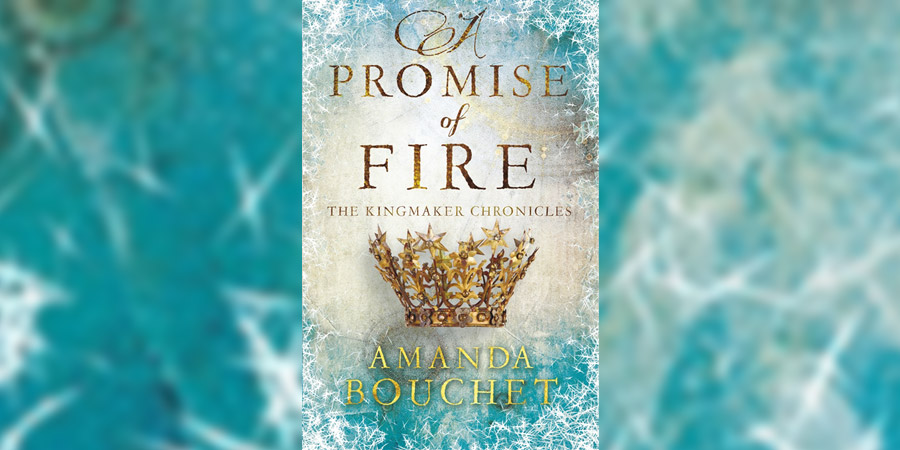 With so many fire and ice themed fantasy books released over the last few years, I have to admit I was feeling a little jaded when I picked up Amanda Bouchet’s A Promise of Fire. Did I really want to read about yet another young woman with extraordinary powers rising up to claim her destiny? Turns out the answer was yes, I really did. Just one chapter of this sparkling debut was all it took to have me completely hooked.

As the first book in The Kingmaker Chronicles trilogy, A Promise of Fire centres on Cat, a circus performer and soothsayer (a person who can foresee the future) laying low under the protection of the circus-folk who have become her unofficial family. For Cat, the illusion and mystery of the traveling circus provides the perfect disguise, because she’s a mystery too. Having stumbled upon the circus as a young girl in need of safety, obviously running from something or someone, Cat has kept the secrets of her past buried where no one can find them.

That is until a southern warlord called Griffin saunters into her tent one night and sees through Cat’s carefully composed camouflage. Though he isn’t aware of the true extent of her powers, Griffin realises that Cat has formidable magic abilities far beyond her soothsayer title. Having united the tribal nations and seized a Kingdom that’s on the verge of war, Griffin considers Cat an asset his family needs on their team in order to conquer the opposing sides.

Yet Cat has no intention of being used as a pawn or a weapon in the battle between north and south, and when she refuses to go with Griffin and his men willingly, they abduct her from the circus anyway. As they travel to Sinta City, where Griffin is Beta to his sister’s Alpha, Cat is forced to make a decision that will alter the course of her future: somehow escape the warlord and live the rest of her life on the run, or join Team Beta and fight against the glacial queen already hunting her.

“I’ve known all sorts of fear – fear of pain, fear of discovery, fear of capture. This is new. This is the kind of fear that teaches me the difference between trying to stay alive, and wanting to live.”

With a feisty heroine at its core, A Promise of Fire is a sexy, magical and mythical fantasy that sizzles with passion. But what sets it apart from other books of its ilk is the Greek mythology that centres Bouchet’s world. This is a land where magic and prophecies exist and the ancient fabled Gods – Poseidon, Zeus, Hades etc – aren’t just folklore. Cat herself slots into this mythology as a Kingmaker, a person who can divine the truth through lies, which makes her more like the Gods than she’d care to admit.

From the moment she’s abducted by Griffin and his three warrior comrades, Cat finds herself in an ever-constant battle of wills and wits – hell-bent on throwing shade at her captives despite their fair and jovial ways. There’s plenty of playful banter and witty, sarcastic dialogue between the characters, which keeps the tone light. Although she’s ostensibly a prisoner, there’s never a feeling that Cat is in any danger with Griffin – and her undeniable attraction to him shows that she’s aware of that too. Persuading Cat to join Team Beta becomes something of a game and an enjoyable one at that.

As a Romance Writers of America contest winner, Bouchet knows how to write love and lust. The romance that plays out is so deliciously indulgent that sometimes it threatens to take over the entire plot, casting a shadow over the bigger picture. There was a bit too much lustful growling and kitten-like mewing for my taste but it’s suitably steamy and explicit stuff if you like that kind of thing – which goes some way to explaining why this is an adult novel and not your typical YA fare.

Thankfully Bouchet reins the romance in when she needs to, making sure the story isn’t solely about lingering looks and sizzling touches. Her characters are resilient and lively, particularly headstrong Cat who lives up to her name; she might look harmless but make her angry and the claws come out, scratching and slicing with dangerous accuracy. Griffin and his men are all just as captivatingly written, and, as Cat discovers, it’s difficult not to warm to such frisky, compassionate and capable fighters. They’re as devoted to each other as they are to their cause and when they good-humouredly tease Cat, it feels like she should have been with them all along.

The mark of a really good book is when you’re on the last few pages and you deliberately slow down so that you can put off reaching the end. I did exactly that with A Promise of Fire. It sneakily burrowed into my heart and took root, making it an early contender for my favourite fantasy of the year.