If you were to hastily compare last year’s acclaimed ‘San Junipero’ and ‘Hang the DJ’, you’d be forgiven for coming to the conclusion that Black Mirror had run out of ideas. Both are centred around relationships, both end on a vaguely uplifting note, and both are revealed to in fact be set primarily inside a computer simulation. If you’re a fan of pointlessly silly number patterns like the 23 enigma, then you can add that both episodes are the fourth in their respective seasons. Like that makes a difference to anything. But even if there are basic similarities at play here, the themes, or more accurately, how the episodes deal with their themes, are wildly different.

Saying that, there is one particular parallel that I couldn’t help but draw. Generally speaking, it’s hard for good drama to shine through bad acting; if the actors don’t turn up, everything largely falls apart. But it’s something that’s particularly key to relationship dramas, like ‘San Junipero’, and like ‘Hang the DJ’. So much of an episode like this relies on the acting, and more specifically, on the chemistry between the actors. We need to buy into Kelly and Yorkie, to use the colloquial lexis, ‘as a thing’. So too, in this case, do we need to see Frank and Amy as fundamentally compatible people. There needs to be a palpable tension and contrast between the time they spend together, and the time they spend with others.

It’s to ‘Hang the DJ’s immense credit that it’s quite so brilliant in that department. Or perhaps more accurately, it’s thanks to the superb work of Georgina Campbell and Joe Cole in their roles as Amy and Frank respectively. The script is sharp and personable, reminding us that in amongst all the zany nihilism and ideas for how anything could spell the end of the world, Charlie Brooker’s innate talent is for writing people, rather than just characters. But it’s thanks to Campbell and Cole – which, when you put it like that, sounds more like a jewellers or law firm than a pair of young, up-and-coming actors – that the script translates quite so well to the screen. Every little action is filled with sincerity.

Celebrated cinematographer Roger Deakins once said that “If the audience don’t notice [his work], you’ve done your job”. If the audience can forget an actor is, well, acting, then their job is done too, and that’s certainly the case here. I’m talking about the smaller moments; the little exchange that follows Frank accidentally spitting food onto Amy’s shoe while choking; their declarations earlier in the episode at the end of their first meeting, that if they were to do it again, they’d both “totally get it”; their gradually increasing irritation at the rigid advice of their technological Siri-like Coaches. In the bigger moments – their escape, their second meeting, their argument – the two still shine, but it’s easier to remember it’s a drama. 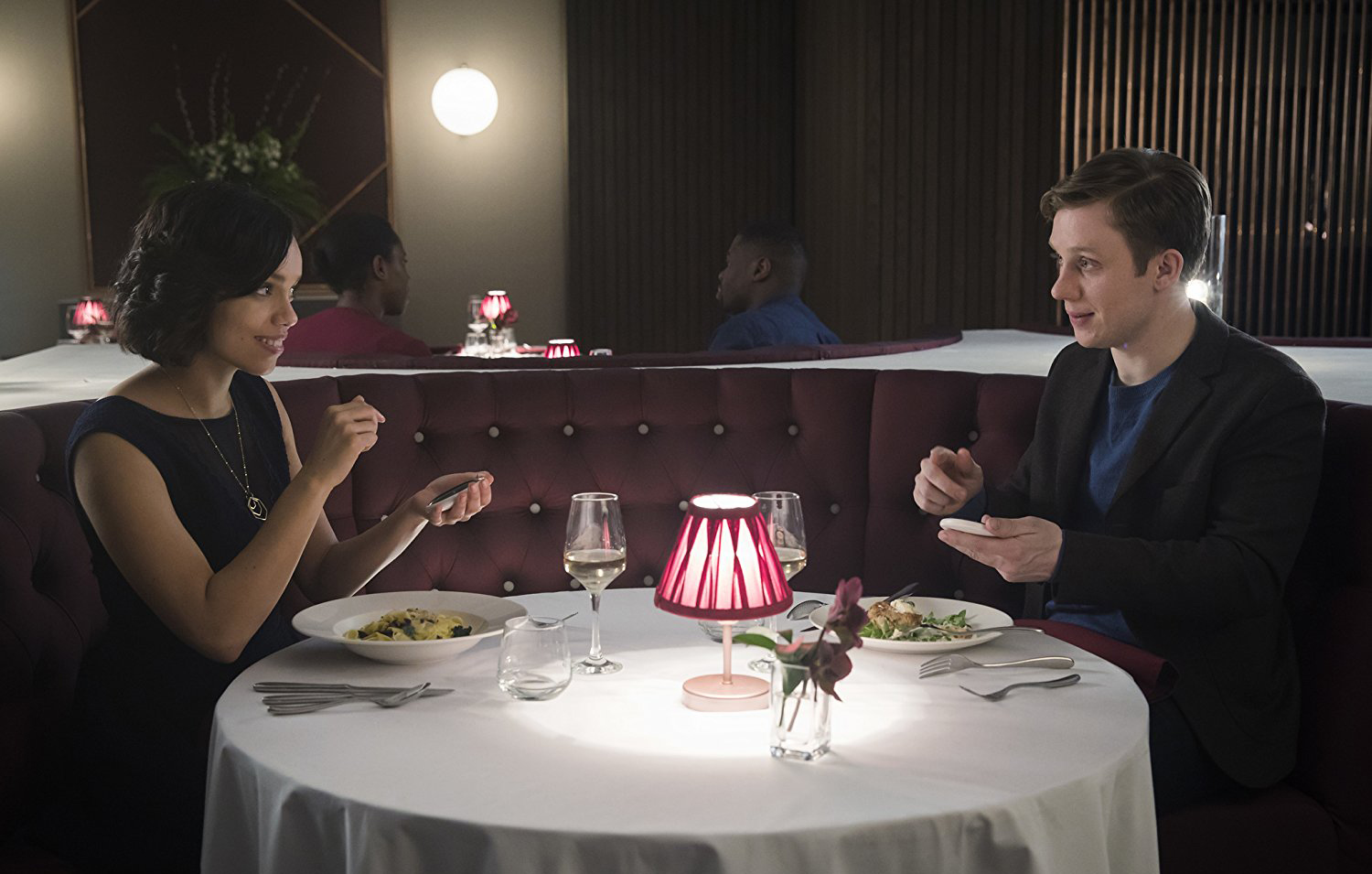 That propensity for seamless connection is also central to the ultimate reveal of what they’re doing inside this eerily clean, walled-off community. I wrote concerning ‘San Junipero’ of the benefits that episode got from heavily alluding to the nature of San Junipero within the first minute or so. ‘Hang the DJ’ isn’t so quick to the button, instead teasing us with conspiracy theories and conspicuously predictable stone-skimming. But it does become clear at a similarly effective time to its predecessor from season 3, before providing confirmation to the audience at the same time as it’s given to the characters. And thus, they escape over ‘the Wall’, ending the simulation, and taking their place as one of 1000 that have been produced to calculate that final, familiar number that appears to the real Frank and Amy as they prepare to really meet for the first time: a 99.8% match, from 998 simulations in which Frank and Amy ran away and chose each other.

There’s nothing in Black Mirror that hasn’t been thought out at length, and thus, it’s particularly interesting to consider that exact number. As a throwaway link to the real world, a percentage to reassure the characters that the system has got it right, it comes across as a comfortingly high number; only 0.2% off a total match. But within the structure of the system as it really works, that’s two versions of Frank and Amy who didn’t reconnect, or who didn’t choose to see each other one last time before ‘pairing day’, who ultimately accepted their role in society. There isn’t so much speculation involved in wondering what became of these two versions, given pairing day was presumably the last chance saloon of the simulation, after which the lights would go off.

But it is interesting to consider that these two versions were the failures, conforming to a system that insisted that ‘the One’ was someone entirely new, that they were for each other just steps on the path to that ‘ultimate match’. Yet in choosing to listen to the reassuring 99.8% that greets them both as they lock eyes at the bar in reality, they’re ironically doing just that. Their version of success, effectively, is to trust the system, in a way that their simulated selves had to rebel against in order to succeed. It’s important, then, that ‘Hang the DJ’ does leave us when it does, with the connection made, but without only tacit confirmation that the two are as compatible as in their simulation. Who’s to say – either in an Elon Musk-like sense of ‘what if we’re in a simulation too’, or just in the general sense of romantic satisfaction – that Frank and Amy are meant to be? The real coach, the nameless neo-Tinder that brings them together, is who.

Maybe that doesn’t matter. Maybe to some, that’s the point, but it’s a highlight of the episode that as simple as the basic premise is, the manner in which it unfolds leaves questions that require more detailed answers. Are we – are you, am I, given it’s a personal perspective rather than a consensus one – comfortable with the idea of the sim-Frank and Amy as sacrificial lambs to the altar of the possibility of a match for the real Frank and Amy? As I’ve mentioned with previous episodes, you might well answer differently in the moment to once you consider it at greater length. “They’re not real! Their purpose in life was to bring the real Frank and Amy together! Their ‘death’ was totally painless!” All true. But if Black Mirror has drilled anything into the audience collectively since 2011, it’s the persistent morality behind such choices. It’s never as simple as “they’re not real” because none of them are real, and the ones being disintegrated are the ones we’ve been with for the last hour, whereas the ones meeting in a bar for the first time are characters we’ve never truly met. Say that they’re not real, and then watch ‘White Christmas’ and put that theory to the test as cookie-Joe endures a million years of “I Wish It Could be Christmas Everyday”. It’s a hard sell to come down firmly either way.

That, though, like Deakins and his invisibility, is sign that Black Mirror has done its job. The episode is long over and you’re left there, still wondering about the fate of one simulation within a thousand.