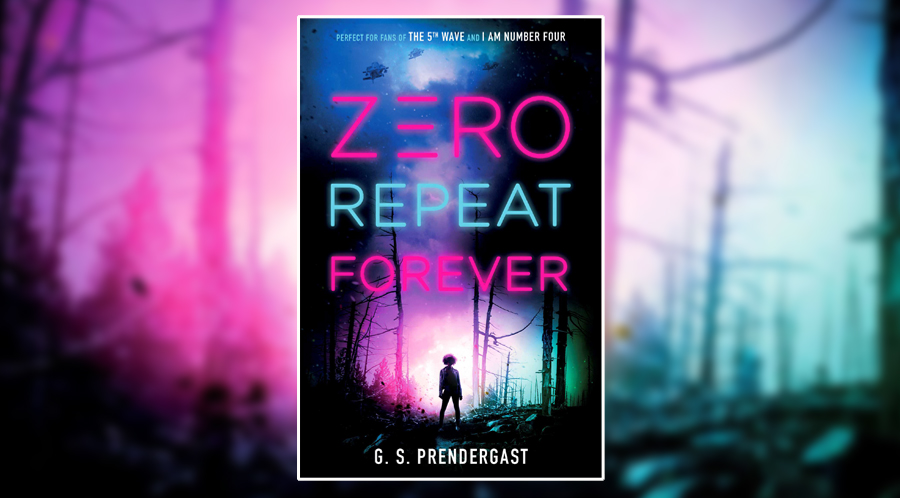 Zero Repeat Forever is not your typical apocalyptic alien invasion novel. The pieces are all there – determined heroine, terrifyingly brutal enemy, rebellious defector forging their own way – but G. S. Prendergast weaves them together in a beautifully tragic story of destruction, hope, and, above all else, survival.

Raven is sixteen and at a summer camp when the invasion happens, which may have just saved her life. Isolated in the wilderness outside of Calgary, Raven’s small group decide to stay put, hope to be rescued and learn as much about the invading Nahx as they can when the emergency broadcast signal sends information through. Until a Nahx kills Raven’s boyfriend, that is, and they realise they aren’t as safe as they think.

Meanwhile, Eighth is one of the Nahx – an imposing, mechanical presence with no name and no voice, just a rank and a mission to “dart the humans and leave them where they fall”. When we meet Eighth, his job is to protect his Offside, the Nahx he’s paired with, as she does the shooting. But when a human kills her, Eighth is left questioning the mission and his directives – and when he comes across an injured Raven in the wilderness, there’s something stronger inside him that can’t kill this little human who’s so determinedly fighting for her life.

What follows is a story of two vastly different individuals being thrown together in a violent and unforgiving world as Raven is forced to begrudgingly entrust her survival to the enemy and mostly fails to fight off the hate and fear she feels for him in the process, all the while Eighth struggles to remember that he’s deserted his unit and made a promise to see Raven safely home to her people, even if it means giving her up (and maybe his life too) at the end of it.

“I close my eyes, a silly girl with a broken heart, and open them as a soldier who will never surrender. I know what kind of hope remains when the likelihood of getting out of this alive is gone. I hope I can take a hundred Nahx with me, a thousand.”

As far as dystopian protagonists go, Raven is probably one of the most realistic. She fights, she rages against the injustice, she bleeds, she breaks, she recovers; Raven is not a superhero, just an angry teenager with the misfortune to be placed in impossible circumstances. Eighth too is a character defined by circumstance, forced to engage in a war he doesn’t necessarily believe in and who makes decisions based on impulse, like the urge to protect Raven. His fascination with Raven may not be something that’s particularly explained, but the fact that Prendergast is able to turn Raven’s hatred and fear and Eighth’s obsession with her into a mutual relationship of trust and acceptance in a completely natural way highlights the depth and believability of these characters and circumstances, and is a testament to the author’s all-encompassing writing style.

By its very nature, Zero Repeat Forever draws inevitable comparisons to Rick Yancey’s own YA alien invasion drama The 5th Wave and it’s easy to see why. Where Prendergast differs, however, is the rendering of her alien other as something distinctly different, which takes her novel in a different direction, focusing on character build-up and the developing of a communication system to overcome the divide between the enemies. It’s also been pitched as a take on Beauty and the Beast, which places an unfortunate expectation of romance and happily ever after on the book, and that’s not necessarily where this novel is going. Even so, it’s hard to deny the sci-fi rendered fairytale elements of the piece that do exist, from the picture-perfect contrast of the snow white streets and the tall, dark tower to the not-so-surprising revelation that the ‘beast’ isn’t the monster after all.

Overall, Zero Repeat Forever is a high stakes, heartbreaking story of survival and a great start to the new Nahx Invasions series. Raven and Eighth are both great characters, and the novel combines action, drama and mystery to great effect from start to finish. Switching narratives between one of the invaders and one of the invaded makes Zero Repeat Forever a gripping novel, complete with a slow build and a gut-punch of a finale that hooks you in and doesn’t let up. It is a slow start, with Eighth and Raven not engaging significantly until at least halfway through, but the final third in particular cements this novel as something brilliant, and I’m already looking forward to the next instalment.

The Pilot Project: The Good Place