Whitney: Can I Be Me DVD Review

Flashback to the mid-nineties, I’m at my mum’s best friend’s house for New Year’s Eve and they’re drunkenly belting out ‘I Will Always Love You’ at the top of their lungs. A few years later the local radio station won’t stop playing ‘It’s Not Right But It’s Okay’ and I am utterly obsessed with the feisty vocals I hear from Whitney Houston. This was the extent of my Whitney fandom – I was never a huge follower, possibly too young to appreciate just how important an artist she was in the 90’s, but she was an icon. If you showed 6-year-old me a picture of Whitney I would know exactly who she was and have since become a much bigger fan of her music, so was interested in the release of the new documentary about her life, Can I Be Me.

Directors Nick Broomfield and Rudi Dolezal know their way around producing a documentary about this kind of icon. Between them they’ve told the stories of Biggie Smalls and Tupac, Freddie Mercury, Kurt Cobain and Courtney Love among others, artists whose lives captured a momentary zeitgeist. Whitney: Can I Be Me tracks the rise and demise of the pop icon, predominantly focusing on the ‘victim of fame’ narrative to an extent that left me feeling like there was much more to tell. We see archival footage from Whitney’s ‘last successful tour’ in 1999, where images of the star looking slightly worse for wear, overly sweaty and a little slurry are presented without comment for you to draw your own conclusions. The documentary quickly steams its way through her childhood (where she took drugs from a young age, her brothers inform the camera) to her ‘pop princess’ beginnings with the bubble-gum make up of ‘I Wanna Dance With Somebody’ and straight to the decline, when she was at the peak of her fame.

We see Whitney being booed at the Soul Train Awards in 1989 because, as the film quotes, many of the audience didn’t believe she was “black” enough. This issue is explored in some depth, how the gospel singer was made to fit into the predominantly white pop scene, changing how she dressed and the music style in which she sang to be ‘easier’ for a white audience and how this must have been a big confidence knock and incredibly frustrating for a young Whitney. Her sexuality is also explored within the documentary, with the rumours of her being bisexual and having a love affair with her best friend and confidant, Robyn. This is one of the most interesting aspects of the documentary. 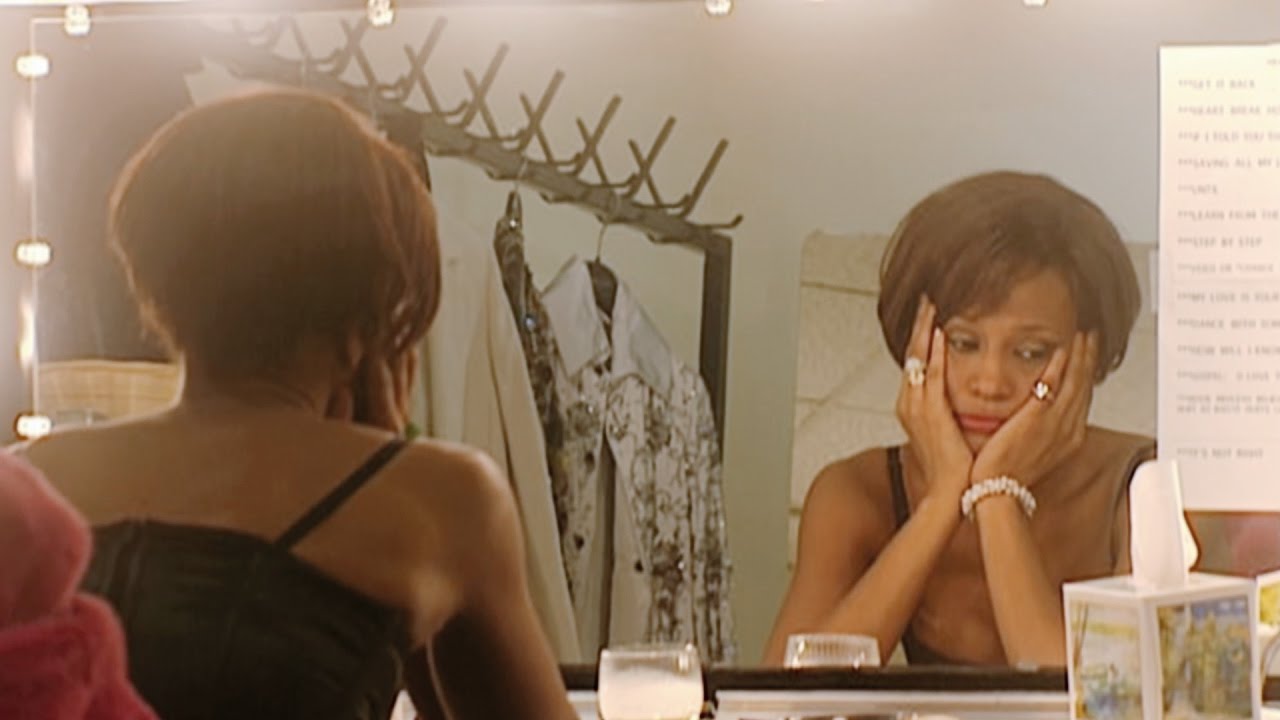 Robyn is seen throughout the 1999 achieve footage and seems to be a positive influence throughout Whitney’s career until she and ‘self proclaimed bad boy’ Bobby Brown finally come to blows and Robyn (who isn’t interviewed at all within the film) leaves Whitney to never see her again. There is a quote from Bobby though, saying that if Robyn was still a part of Whitney’s life he believed she would still be alive, which is all the more interesting after the reported bust ups the pair had. The relationship with Bobby himself is shown quite a lot and there are some touching behind the scenes moments that help to show the complexities of this kind of relationship, rather than just lazily painting him as the villain of the piece. There’s also a darkly amusing bit where Whitney and Bobby act out a scene from ‘What’s Love Got to Do With It’ with no sense of irony in a hotel room.

Whitney: Can I Be Me is a well edited documentary that has relevant and interesting talking heads, particularly Whitney’s real-life bodyguard and Bobby Brown’s sister, and the footage they use feels like a new glimpse to a fun, more laid back Whitney than we are used to seeing. It does however feel too sleek. There’s very much a linear storyline to this documentary. Whitney, a martyr to fame – but the title suggested we might actually get more of an insight into the complexities of Whitney’s character and how her famous relatives, sexuality and her upbringing affected her along with the pressures of fame. We get a bit of this as the documentary winds up, as they explore the relationship between Whitney and her daughter Bobbi Kristina, who tragically died at age 22 after her mother’s death, but these moments feel rushed and are used as just another storyline focused on the tabloid selling drug addiction, rather than the woman herself. Can I Be Me is a slick documentary that provides little insight into the mind of Whitney Houston or really what made her demise so tragic.

Whitney: Can I Be Me is out on DVD and Blu-ray now