Inspired by an article about two American arms dealers who gained a $300 million contract with the US Army and subsequently committed mass fraud, Todd Phillips’ War Dogs paints a dark and disturbing picture of contemporary America. Veiled in an entertaining script, this true-life story of two unlikely hustlers isn’t so much about the ethics of what they were doing but how they managed to pull it off, and how they eventually got caught.

The film centres on David Packouz (Miles Teller) who joins his friend Efraim Diveroli’s (Jonah Hill) arms company, AEY, in order to provide a better life for his pregnant wife. The pair very quickly win hundreds of contracts worth millions of pounds, before obtaining a major deal with the US government to supply the Afghan Army with ammunition and aviation rockets. Inexperienced and eager for a quick sale, Packouz and Diveroli secure ammunition from Albania, not realising that it originates from China and is therefore illegal under US Army law.

With their reputation and future at stake, the duo – known as ‘the dudes’ for their proclivity for getting stoned – repackage the ammunition crates in order to hide the country of origin and fool the government. Anyone who’s read Guy Lawson’s Arms and the Dudes will know how the story ends, though it’s clear from the opening flash-forward – where Teller’s David has a gun pointed at his head – that this is very much a tale of a business, and a friendship, gone sour.

From the beginning, Jonah Hill’s Efraim is the wild card, the loose cannon. He doesn’t care about laws or breaking them, he just wants to make money and part with as little as possible. Never for a second does he believe they’ll get caught out. With a family to consider, David is the voice of reason, though he’s swept along with Efraim’s crazy enthusiasm for what they’re doing and all the dosh they’re banking. Soon the two are living the high life, with fancy apartments, sports cars and a rich lifestyle that’s like an addiction, making their downfall feel inevitable from the moment they decide to swindle the government.

Teller and Hill optimize the laddish behavior and mindset of Packouz and Diveroli – something that borders on complete arrogance. But whilst Teller brings an element of earnestness to his role (we’re led to believe that essentially he just wants to give his family a good life), Hill’s Diveroli is entirely unlikeable and painted as the villain of the story. His shrill laugh and overconfident demeanour almost make you happy for his predictable disgrace. These aren’t men we’re supposed to like or sympathise with and Phillips is clear to paint the duo in the negative light their illegal conduct should be associated with.

The film doesn’t instill much confidence in the US government or the state of international arms dealing either, though it’s probably wise to steer clear of delving too deep into that particular minefield. When such a story is heavily dramatised, it’s difficult to know what exactly is pure fact and what is fiction, which is part of the problem with War Dogs; the audience isn’t entirely sure how to approach the film’s ‘true-life’ subject matter. 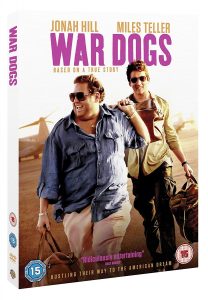 As a comedy, War Dogs lacks the easy laughs Hill and Teller are so accustomed to delivering. With frequent voice-over narration from Teller, it works much better as a topical and timely drama that tackles fascinating real life events. Yet despite an engaging chemistry between the two leads, there are better films that cover the themes of economic plights, collateral damage and the American dream.