With Under the Silver Lake, his follow up to the successful low budget horror movie, It Follows, director David Robert Mitchell turns his attention towards film noir and makes the type of movie people won’t stop talking about.

Under the Silver Lake follows Sam (Andrew Garfield), a layabout drifting around Silver Lake, Los Angeles. When Sarah (Riley Keough) disappears one night, Sam makes it his mission to save the missing damsel. Following a series of clues, Sam ends up exploring LA’s underbelly of crime and corruption. So far, so noir.

Garfield continues his interesting selection of movie roles and is a dopey delight as Sam, a driven man who seemingly cares about nothing. Garfield has always been an empathetic performer and suitably masks Sam’s menace behind a puppy-like smile. You are always suspicious of Sam, never sure about his role in the wider story. Fortunately, Mitchell doesn’t care about the plot or our expectations. Like Sam, he’s more concerned about the messages.

Under the Silver Lake could easily be retitled “Semiotics: The Movie”. Mitchell turns the clues Sam is following into a comment on our interaction with pop culture. As the clues unravel, Mitchell suggests our culture is all designed by the powers at be, that we follow orders hidden in pop songs like ‘I Want It That Way’. Even the rebellion taking place in subcultures such as grunge isn’t a rebellion as the rebels are still following orders.

Mitchell’s focus on messages and codes gives his film a smart, meta-textual edge that allows Under the Silver Lake the chance to reflect on its position within the noir genre. There are fun and overt homages to classics such as Rear Window, The Long Goodbye and Mulholland Drive. These references will please film buffs, and they’re a great superficial standpoint for Mitchell to create a discussion.

Under the Silver Lake is passionately aware of its genre, and Mitchell breaks from tradition, mixing formal composition with jagged handheld movements and delivering exposition through some spiky animated sequences. Yet Mitchell struggles to overcome film noir’s biggest pitfall: the male gaze.

In film noir, women exist to look pretty and/or be killed. Mitchell, with his breakdown on media coding, quickly draws the connection between sex and innuendo in culture to patriarchal dominance. Within his own film, Mitchell oversteers and the early scenes are filled with ogling voyeurism and copious close ups of bikini-clad bottoms. 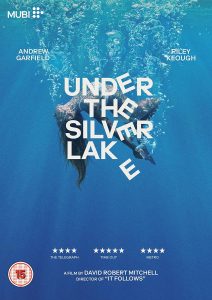 When Sam first has sex, his partner is naked while he wears a t-shirt. The male character being fully dressed during sex, while his partner is naked, is a staple of the Male Gaze. Mitchell tries baking this commentary into his narrative, Sam loses more of his clothes as the film progresses, supposedly shedding the film’s Male Gaze, but the director still arrives at a pedestrian conclusion. In Under the Silver Lake, women still exist to look pretty and/or die.

It’s a pedestrian ending in what is otherwise a bonkers, original and gripping mystery. Under the Silver Lake is a perfect example of a director going for broke after the success of their previous movie. You have to admire Mitchell’s ambition and the fact he persuaded other people to fund his madcap journey through LA.

Under the Silver Lake won’t be for everyone, but if you’re willing to let it wash over you, there are endless delights waiting for you.

Under the Silver Lake is out on DVD now.