ALL THE TRIGGER WARNINGS.

Please do not read this or watch the show if you’re triggered by: physical abuse, sexual assault, violence and/or gore.

Firstly, this show should most certainly be called Sex, Death and Robotics. That would be closer to being accurate, based on the majority of this 18-episode collection of shorts. Secondly, the quality of the animation, from CGI to animate illustration, is impressive. Granted, a few of the motion capture episodes look a lot closer to video game cutscenes than a Pixar pre-movie short, but all of the illustrative pieces are excellent. 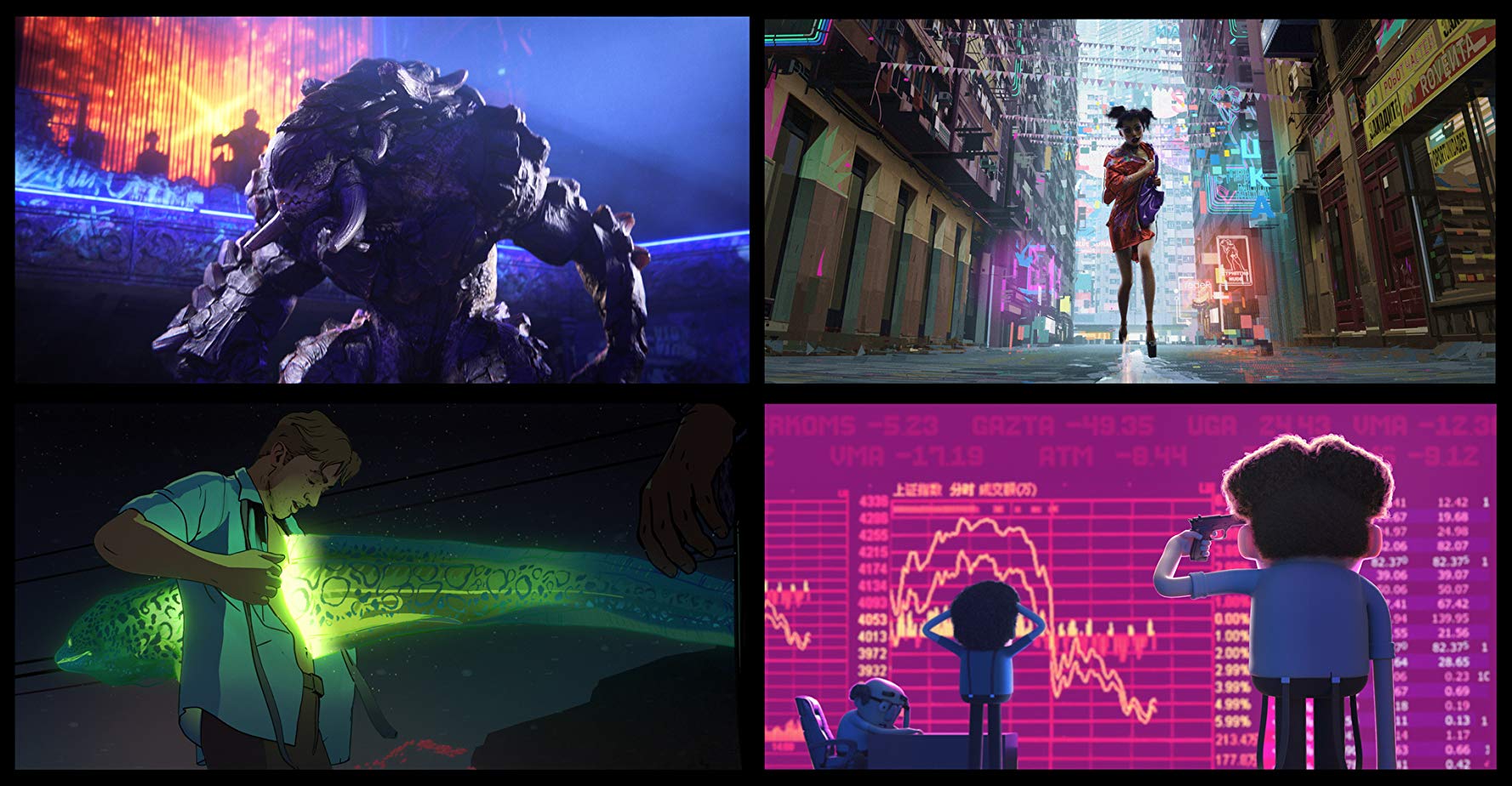 Who is this show for?

Love, Death & Robots is a well made yet horribly teenage and unprogressive show. There’s an overarching trend where women are shown to be monsters or victims of abuse, mostly sexual including rape, and are often shown naked or semi-naked. The moral, if that word even applies here, is squarely aimed at straight, cis men, telling them that women are monsters, except when you get to know them they might actually be alright and worth sleeping with/caring about, although they will always be monsters.

This isn’t to say that there aren’t some conceptually interesting characters. There are many women (or female presenting) characters who are interesting – from the kitsune spirit to a cage fighter who battles as/with a monster. But the way it’s presented, with these women being either broken or temptresses, is so incredibly gross and inconsiderate.

Like the visuals, the story concepts are interesting but executed in a way that feels exactly like what we’d expect and exactly what we don’t need more of. Take ‘The Witness’, in which a women sees a man murder a women in the building across from her. The killer spots her and realises not only that she’s seen what he’s done, but that she looks exactly the same as the dead woman. A chase ensues where the women from the window is naked apart from a coat, and the man is fully clothed. He chases her to a club where she’s a masked, naked dancer (there’s a “theme” here), and he eventually chases her into the apartment from the start of the story. Here they have a tussle with a gun and he ends up dead. She looks out the window at the apartment opposite where the man has just witnessed her killing him. It’s a loop.

The animation style is similar to Spider-Man: Into The Spider-Verse with pops of colour and sounds animated as words on screen. That part is good, technically. But imagine the roles were reversed, and the man was naked throughout and he danced in a club. That changes the dynamic completely and wouldn’t be something we’ve seen before. It’s subversive. What we get is anything but.

Even in better episodes like ‘Three Robots’, which is a funny short about three robots who visit a city where humans lived, humanity have died out some time ago. The only female-voiced character of the three robots is the one without a human body. You have to ask, why is that?

Despite the nagative elements, and because this is a collection of shorts, there are some good stories thrown into the mix. Based on the order I watched them, the six I would recommend are: ‘When The Yogurt Took Over’, ‘Helping Hand’, ‘Fish Night’, ‘Lucky 13’, ‘Zuma Blue’, ‘Ice Age’. You can avoid the rest.

‘When The Yogurt Took Over’

In less than 6 minutes, this quirky little story explains how the human race came to be ruled by yogurt. It includes amusing moments, especially if you like a bit of wordplay. The animation style is more Disney than anime, which suits the story.

One of the darker good stories, ‘Helping Hand’ sees an astronaut trying to make repairs to her base in orbit. Somehow a piece of space debris catches her unaware and she’s sent off into space. She has to think quick if she is to have any chance of getting back to safety. It’s grim in parts, but effective.

Possibly my favourite of the bunch. It has a magical quality that excites the imagination. Two men are driving in the desert when their car breaks down. They decide to wait until morning before trying to walk back and end up chatting about what it must have been like when the desert was an ocean, millions of years ago. The visuals are stunning.

If you’re a fan of Samira Wiley, and who isn’t, then this one is for you. Wiley plays a rookie pilot assigned to an old ship in the fleet known ironically as Lucky 13. She embarks on her mission to pilot soldiers in and out of warzones, wondering if she can turn the ship’s luck around.

‘Zuma Blue’ feels like it’s the animate friend of Velvet Buzzsaw. It picks apart art, the art world and artistry through the eyes of a reporter who is being allowed access to an infamous artist. He appears to be ready to share both his last work and his story with the world. It’s captivating and considered.

The only one that isn’t actually fully animated or CGI, this episode happens over the course of an afternoon and the next morning, when a couple (Mary Elizabeth Winstead and Topher Grace) move into a new apartment. They open the ancient freezer to discover a minute world exists within. They watch as the civilisation develops rapidly, moving in its own localised time. It’s beautiful and weird.