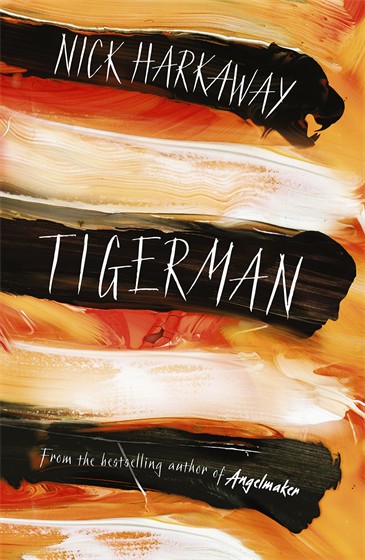 The back cover of Nick Harkaway’s symbolically striped Tigerman is adorned with praise for the bestselling author. Words like bonkers, exuberant, breathtaking and reckless jump off the sleeve, with the phrases ‘a modern classic’ and ‘a box of delights’ making an appearance. With such acclaim comes the weight of expectation and a hope that all this praise isn’t misplaced – we’ve all felt that hollow sense of disappointment when something doesn’t live up to its hype. Thankfully, Tigerman is as entertaining and imaginative as you’d hope.

The story takes us to the fictional island of Mancreau, a former British colony in legal limbo, that’s polluted in more ways than one. Nestled in the Indian Ocean and perched on the lip of a ridge between Socotra and the Chagos Islands, Mancreau was once a paradise, home to an ethnic jumble of Arab, African, Asian and European people. Now it’s a ticking clock, an island plagued by the effects of human abuse and set to be eradicated in order to cleanse the toxic land.

Army sergeant Lester Ferris has been tasked with keeping the peace on Mancreau. His job is to maintain the status quo until the time for final evacuation comes. Having spent his life amidst the horrors of war, Lester is more than happy to serve out his time on the island, but he knows when the hammer falls he’ll have to abandon Mancreau or die with it. However, Lester’s tie to the island runs deeper than his appreciation of its terrain and climate. He’s befriended a young street kid, with mad computer skills and a love of comic books, who doesn’t seem to have a home or family to care for him. Lester wants to adopt the boy, if only he could summon the courage to speak the words aloud.

As the small society of Mancreau falls under the cloud of despair, violence and crime take over and Lester is forced – by paternal love rather than civil duty – to take action. Inspired by the comic books the boy adores, the two hatch a plan that puts them at the centre of all the shady island dealings. Amidst illicit ships, offshore hospitals, money laundering and drug factories, Tigerman is born and he could just be the beacon of hope that the people have needed.

Tigerman is a difficult novel to label because it doesn’t comfortably fit into any one genre. Yet it doesn’t have to. Part of the story’s charm is that it doesn’t ever allow you to become complacent with the plot or characters – in fact you know more about the actual island than you ever do about most of its inhabitants, aside from Lester. Mancreau is a character in itself, playing the role of the child who can’t defend itself against man.

Harkaway’s words jump off the page with vivid descriptions of the setting and it’s exotic ambience, but it’s the relationship between Lester and the boy – who’s unnamed for the duration of the book – which takes centre stage. Lester’s affection for the street-kid is obvious and his awkwardness about wanting to be a father figure but not having any claim to the position comes across so well. He respects the fact that the boy comes and goes as he pleases but at the same time, he wants to protect him because he’s still just a child. When the boy’s comics are torn to pieces as punishment for his spying, you genuinely feel Lester’s rage. As a reader, you want to avenge the act and put the pieces of the comic back together. In his own, slightly muddled, mostly haphazard way, Lester does this and he’s every bit the hero of the entire story.

Clever and confidently written, Tigerman is an exotic, less in-your-face Kick-Ass, a tale of rising up in times of unrest and restoring people’s faith in humanity and the world. It really is a treasure chest of brilliant and barmy delights. The end of the story seems to come too soon and that’s usually the mark of a great novel. Nick Harkaway takes the reader on a wild adventure and, though you know it’s all fiction, there’s a little part of you that wishes that Tigerman was actually real.

Before You Die – Samantha Hayes Review