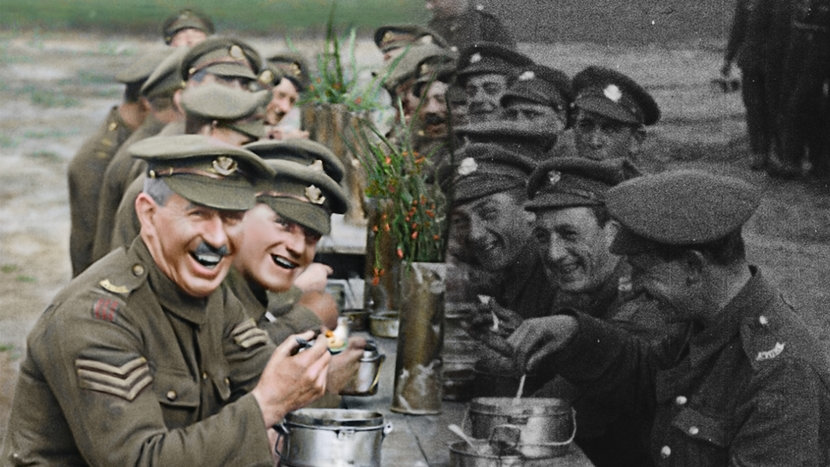 Between 1910-1918, Peter Jackson’s grandfather William John Jackson served in the British Army. They Shall Not Grow Old is a documentary exclusively focused on World War I and Jackson’s direct connection to the soldiers fighting means that this film couldn’t be more personal. Using oral testimonies from the men who fought, what separates They Shall Not Grow Old from the many war documentaries available is the use, and development, of footage. It has been updated to include colour, sound and can even be seen in 3D to recount the period. This is an experience that vividly puts you on the Western front in France, as men gave their lives for the future of their country.

It begins in grainy, black and white that slowly expands as the testimonies are heard. Prior to the outbreak of war, families were aware of conflicts in Siberia and Germany but in November it was clear what needed to happen next. Boys as young as 15 felt they needed to join. It was a “job to be done and we did it”. They would all be coaxed to lie about their age to join the front line. If you had served in the military before you’d be able to re-join in a higher position. You get a sense as to how you couldn’t be a man without joining – you would be questioned on the streets if you were not fighting and looked old enough to join. Then, when we reach France, the screen expands. The haze of black and white is immersed into colour. The noise of marching, chatting and birds litter the soundtrack. The narration continues. The experience of seeing others return from the front; the tight, cramped spaces of the trenches; the camaraderie as they would find a spot to sleep and enjoy a brew is shared and remembered.

But then the brutal truth and ugly realities are retold. Despite those initial memories recounting how “they weren’t afraid of anyone” and, to enlist, was because Britain “couldn’t lose”, the actuality of war is significantly different. Clear, bloody pictures of trench foot are followed by shot after shot of destroyed bodies. Slumped in the corners and laying in close proximities of a space these men had to live among. They talk of the smell and how it was a hundred times worse than a dead mouse. They talk of the rats that could only survive by feeding on their friends. Then it comes to the moment they were required to go over the top and keep running. How, if a bullet hit you, you’d keep running. How, with a machete on the end of the gun, you’d have to kill others in such a cold-blooded fashion. There was no choice, despite your awareness that the opposing forces were made up of similar aged young men. 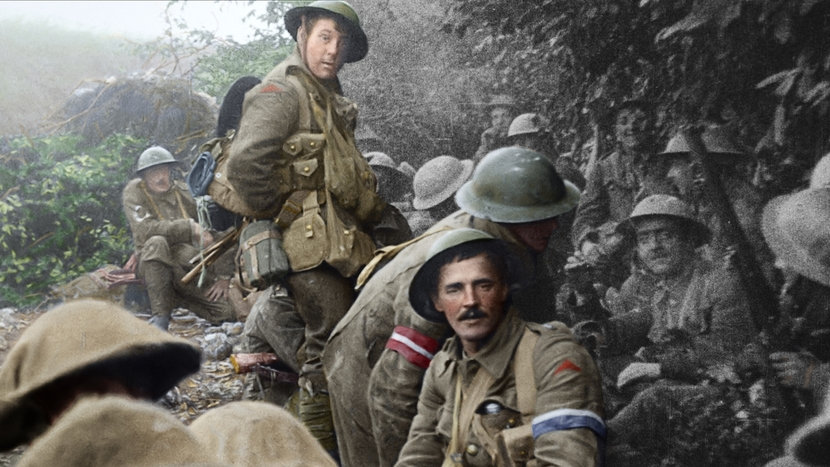 It is difficult to imagine every photograph and video here is real, taken from actual footage on the front line. Often, a single piece of footage is repeated; maybe zooming in on a different smile or a different face. Peter Jackson, a man who can use special effects to make the fantasy real in Lord of the Rings and The Hobbit, takes something that we can only imagine and make the few pieces of accessible media into a truth we recognise.

Part funded by the BBC and the Imperial War Museum, They Shall Not Grow Old is careful about how it depicts the period. But the overriding message is in the ugliness of war. In one sequence, Jackson shows a joking soldier, looking directly to camera and smiling. He could be a relative or a friend, but it switches to show a body that’s similar. The narration, obviously, are the survivors. They reflect as survivors, where the memory of every moment – even when close to death – is a story of surviving such awful circumstances. Jackson, through the footage and how the film is edited together, tries to tell us a story of the deceased. Those who perished are the ones who will not grow old.

They Shall Not Grow Old is a reminder of history. We are 100 years since the end of World War I, and in historical terms, that’s not long. Jackson puts us right next to the soldiers and realises a world that so many of us will, thankfully, never experience – there’s no such thing as a “civilised war”, as one man says. But the lessons regarding war must not be taken lightly.