Netflix continues to give the people what they want, if those people (like me) want a good speculative fiction mystery or a teen drama that doesn’t completely tread the same old tropes. The Society dropped its full ten episode first season this month and with each episode clocking in at almost or at least an hour, it’s a big swing 10 hours of a web series. If we’re going to compare this series to other Netflix shows, it borrows sci-fi ideas from The OA and a setting and cast from Élite – though there’s considerably less sex in this show than in Élite.

A dystopia without an apocalypse 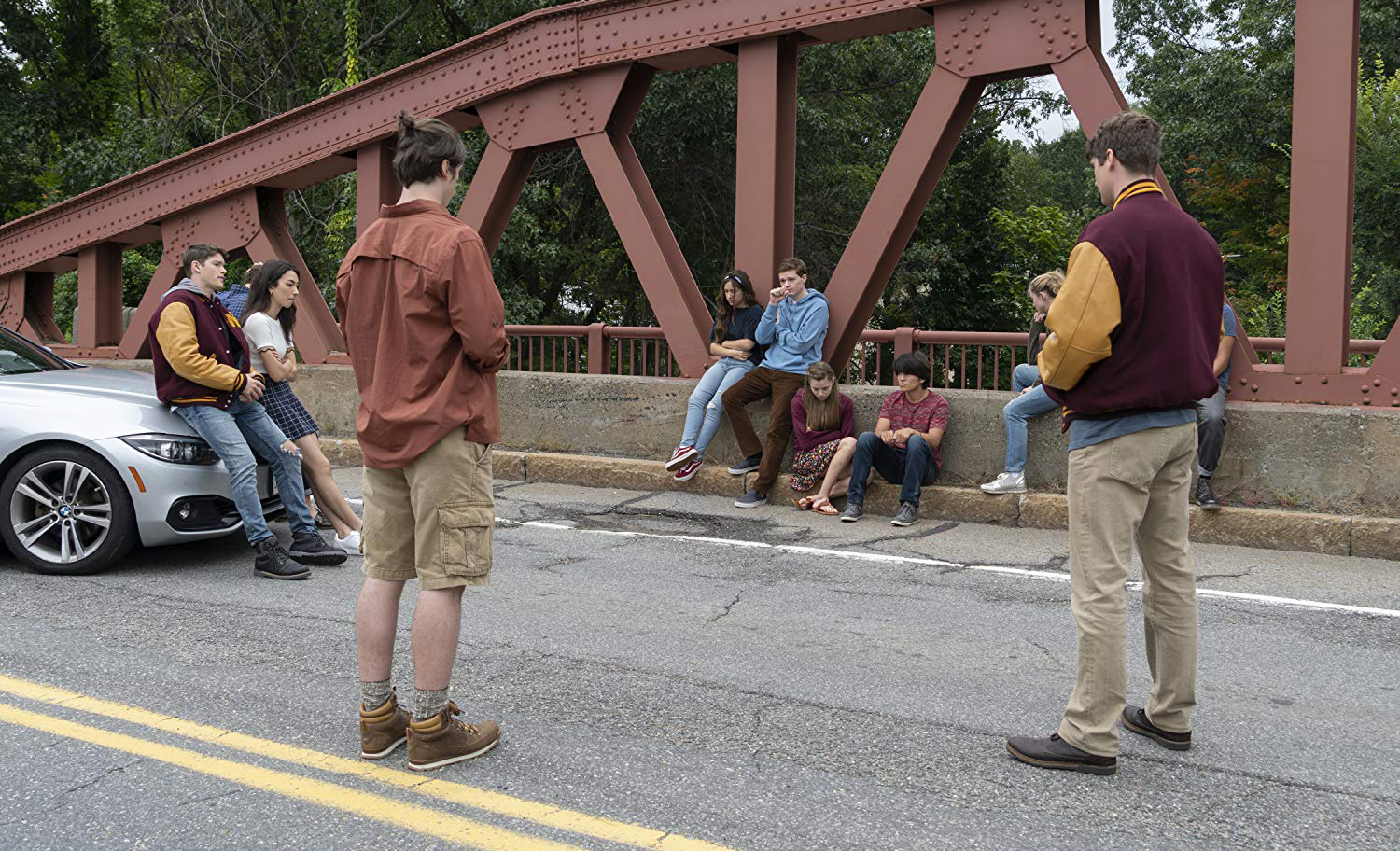 The Society dives straight into its story with very little table setting, which it’s all the better for, as lounging in your average, wealthy American town isn’t what makes this mystery an enjoyable ride.  A “smell” is causing trouble in the town, butthis isn’t a Kurt left out the Easter Eggs scenario. Rather it’s a strange noxious odour that the townspeople can’t seem to get rid of. In an effort to minimise the upset, it’s decided that all the 16-18 year olds in the town are going to be bussed out of town to spend the week camping.

They set off on several school buses, but when a storm impacts their journey, they’re told that they are returning back to town. But when they arrive back, the children find that not only have their parents disappeared, but so has the rest of the town and, it seems, so has the rest of the world. Cut off from everything they knew, a few leaders step up to try and quell any panic and so begin to set up a society. They need it to survive. Assuming that everyone wants to.

They’re now at the point when the dystopia starts to form. There hasn’t been a cataclysmic event that has shattered the world; rather they’ve quietly had everything stripped away. It’s on the kids to decide what happens next.

A big, (quite) diverse cast 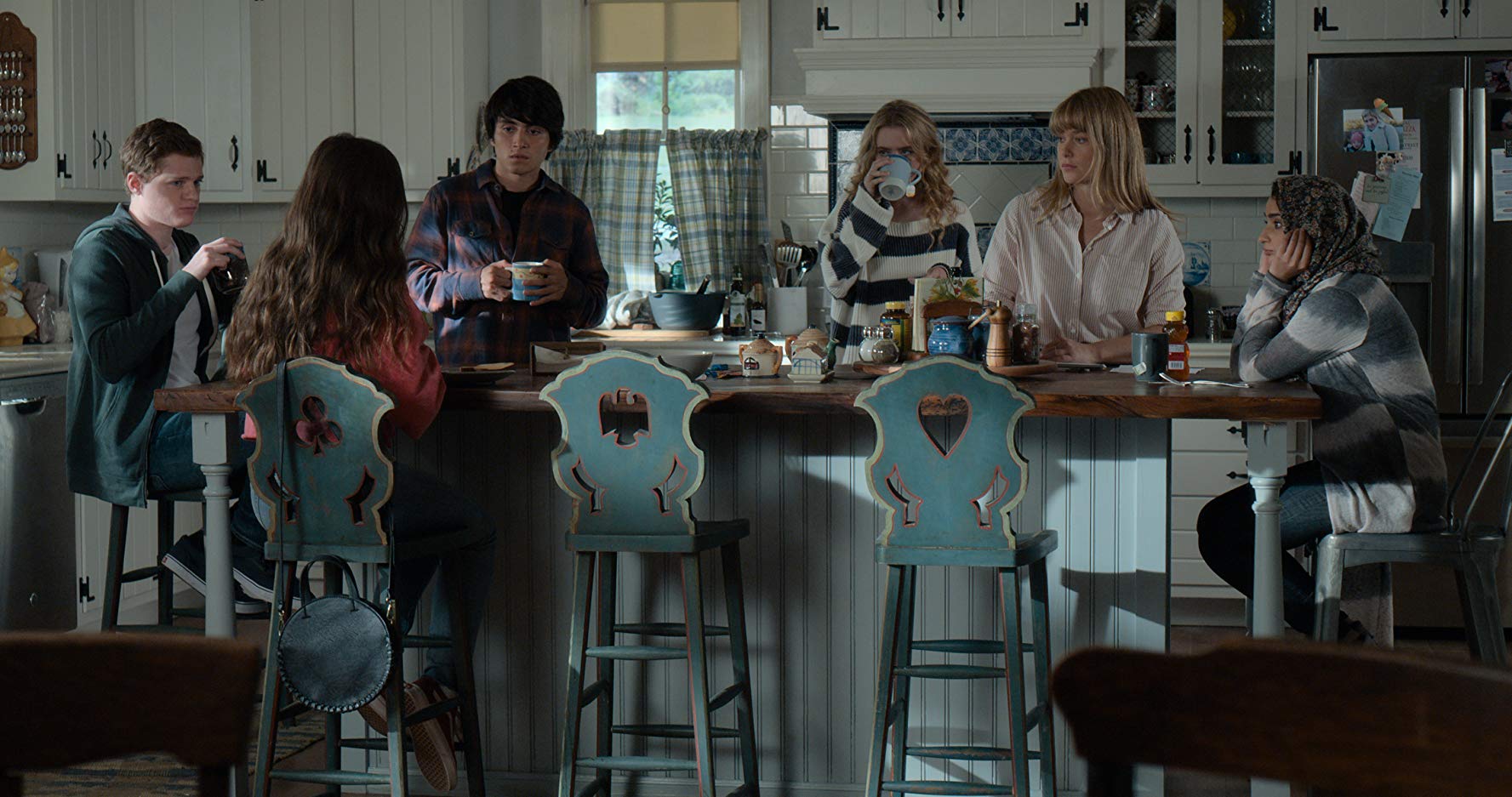 There’s a sprawling cast for this series, and it feels like it. Unlike some teen shows, where you get the sense that there are about five to eight important people around which all events circulate, here we have at least twelve main characters and a slew of recurring. We do get standouts, as you might expect in a survival scenario when there’s a need for leadership. Cassandra Pressman (Rachel Keller) is the voice of reason and one of the oldest; she sees what might lie ahead for the teens if they don’t think carefully. Meanwhile Harry Bingham (Alex Fitzalan) is a rich kid and a jock and so, unsurprisingly, wants to keep his perceived place at the top of the food chain.

Within the cast, we do have some diversity, though there’s a predominant whiteness. Sign language is featured, with Sean Beary’s Sam. He is deaf, using ASL and reading lips. Sign language is slotted neatly into the scenes, and we see numerous people in the town using sign language with him.

There’s a strong cast here, with many big and small performances. Jose Julian’s Gordie is kind, practical and encouraging; Natasha Liu Bordizzo’s Helena is determined, fair and honest, and Jack Mulhern’s Gareth, aka Grizz, is soft, considered and helpful – he’s a standout and someone you can fall in love with. On balance, there’s Toby Wallace’s smarmy, scheming Campbell and Grace Victoria Cox’s coarse, spot-stirring Lexie. Most of the citizens aren’t seen as strictly good or evil, rather they are twisted by circumstance and play roles as they see fit.

The Society looks at how the modern world has placed young people, and by extension, everyone else, into this bubble of expectations about how they can live. Food rationing, laws and community living face off against partying, looting and violence. It’s order against chaos. Children with access to guns and no adult supervision plays out exactly how you might fear, or at least close enough. There are questions being asked in this series about morality and consequences, but it isn’t all seriousness. There’s romantic drama and uplifting moments peppered throughout the series.

One of the most interesting ways in which the children of, as they dub it, New Ham, change is how quickly they become like adults, like parents. Without someone to parent them, they take on roles of responsibility, as law enforcers, medical help, as chefs and cleaners and even clergy. Similarly, we see how the darker sides of humanity can affect anyone, at any age, be it addiction, abuse or coercion.  There’s a lot of story to immerse yourself in, as The Society unwraps the first stage for the citizens of a new world, a new town, a new society. It’s a well told, intriguingly crafted story with so much more to tell. What makes it stand out from some series is that it doesn’t reach for cliffhangers too often, instead focusing on the real consequences of the scenario.