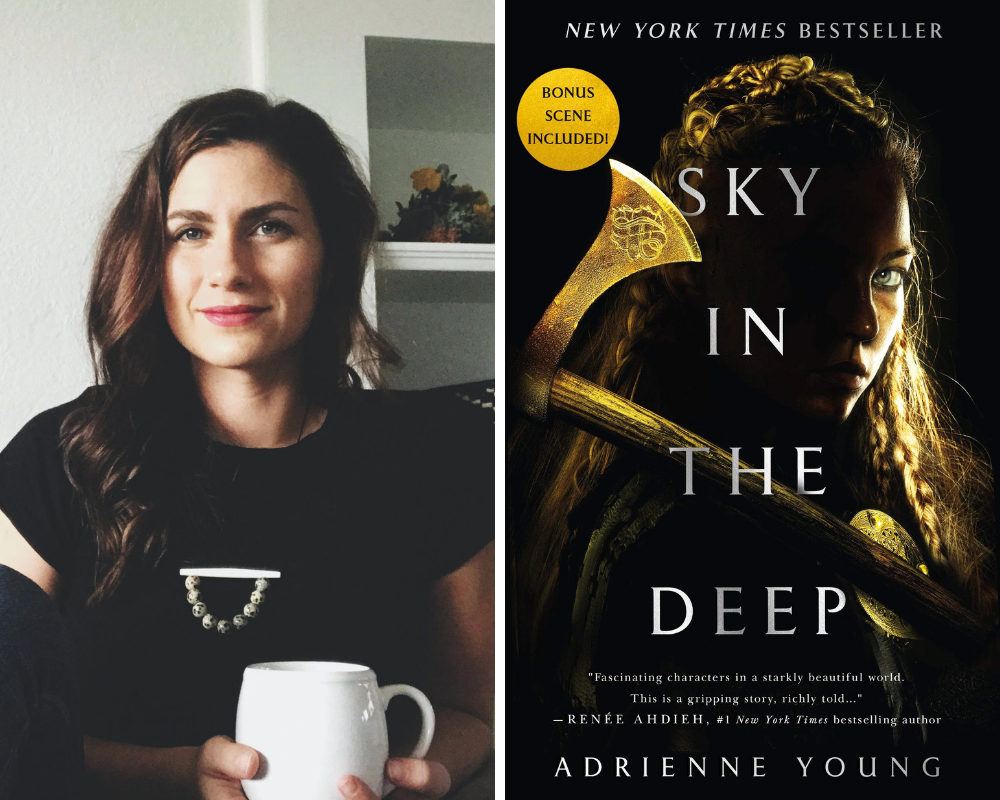 Adrienne Young’s YA debut was published in the US in 2018, but we had to wait almost an entire year to get our hands on it here in the UK. The good news is that it was entirely worth the wait.

Sky In The Deep is a fierce tale of love, loss and loyalties forged and divided. It centres on Eelyn, a seventeen-year-old warrior in a Viking-age world, whose simple existence is complicated when she discovers the brother she thought was dead fighting alongside an enemy clan on the battlefield.

With the publication of her follow-up book due for publication later this year, Adrienne discusses the inspiration behind Sky In The Deep, her thoughts on romance in YA fantasy, what we can expect from her next book, The Girl The Sea Gave Back, and much more.

Natalie Xenos: How did the idea for Sky In The Deep originally come to you?

Adrienne Young: I originally got the idea for the book when I was driving in the rain, listening to this song called ‘To the Hills’ by Laurel. I could just see Eelyn in my head, standing on this battlefield covered in blood and she sees something. I didn’t know what she saw, but I knew it was something that would change everything. I immediately went home and started writing that first chapter and as I typed, the story began to take shape. Iri came into the picture and by the time I reached the end, I had a pretty good idea of where it was headed.

NX: It’s set in a Viking-age inspired world with warring clans and an icy Scandinavian setting – how influenced were you by Viking mythology/history and what was your research process like?

AY: I really love research and I spent a lot of time on this topic. I spend quite a lot of time in that phase and for this book, there was so much more research than I usually have to do, from clothing to weapons to landscapes and native plants. The religion and mythology of the story are made up, but the historical facts are definitely the foundation for what I built within the world. I used it as a framework and that was actually a really fun way to work.

NX: The book is full of fierce and brave characters, which was your favourite to write and why?

AY: Eelyn is definitely my favourite character because I felt so connected to her when I was writing the book. A lot of her journey mirrors my inner one and while I was drafting, I was going through a lot in my life. She really became like a lifeline for me and a way for me to work out some things I was dealing with in the real world.

NX: Eelyn exists in a savage, violent world and she’s not your average seventeen-year-old girl. Yet she remains relatable throughout the entire book. How did you ensure that she’s the kind of character young adults in our contemporary world could understand and empathise with?

AY: I think the key to this is to make sure that characters have some kind of vulnerability. Eelyn is so fierce and strong but she cries and hurts and experiences fear. When heroes fall flat and feel unrelatable, sometimes it’s just that we didn’t make them human enough. No one is 100% good or pure-hearted or brave or wise. Giving characters that chink in the armor is so important.

NX: Romance in YA fantasy can often feel forced or rushed, but whilst there’s an instant fire between Eelyn and Fiske, their relationship and romance builds and grows naturally. What’s your advice for aspiring writers trying to get the romance/action balance right?

AY: This is actually really important to me because as a reader, I’m really unable to feel connected to stories where love happens really fast and two characters reach the peak of the romantic arc quickly. I love writing romance so much that I can’t imagine ever writing a book without romance as a thread, but every single story I’ve written has a slow pace to love for this very reason. If I can’t buy it as a writer, the reader will struggle too. My best advice for balancing romance with action is to give reprieves. There has to be a rhythm to a story that brings the reader up then down. Most of the time, the moment you’ve had an important romantic beat, it’s time for some action and vice versa. Keeping that rhythm makes things flow in a way that the reader isn’t bored.

NX: Sky In The Deep was your debut, what was the hardest part of getting published?

AY: By far the hardest part of this industry is the rejection you have to wade through before you hit success. I am a very determined person by nature, but I came very, very close to giving up on getting published a year before I wrote Sky. I had gotten so many rejections over two other projects that I was just so weary of it. I wanted to feel like I was moving forward but the finish line just never seemed to get closer. I had to dig really deep to get myself back on track and that next year, I wrote two books. One was Sky and the other is an adult novel that’s out on submission right now.

NX: What’s your writing process like? Do you have a set place you write or a playlist that inspires you? What about writing snacks?

AY: I create a playlist for every project I work on and I listen to it religiously while I draft and revise. Music plays a huge role in my inspiration and I really rely on it. I’m also very visual so I create pinboards with images that spark creativity and give me ideas that I go to over and over while I’m writing. As for snacks, I am a cold brew coffee addict and almost always drink it while I’m writing. I also love to eat semi-sweet baking chocolate chips while I work. 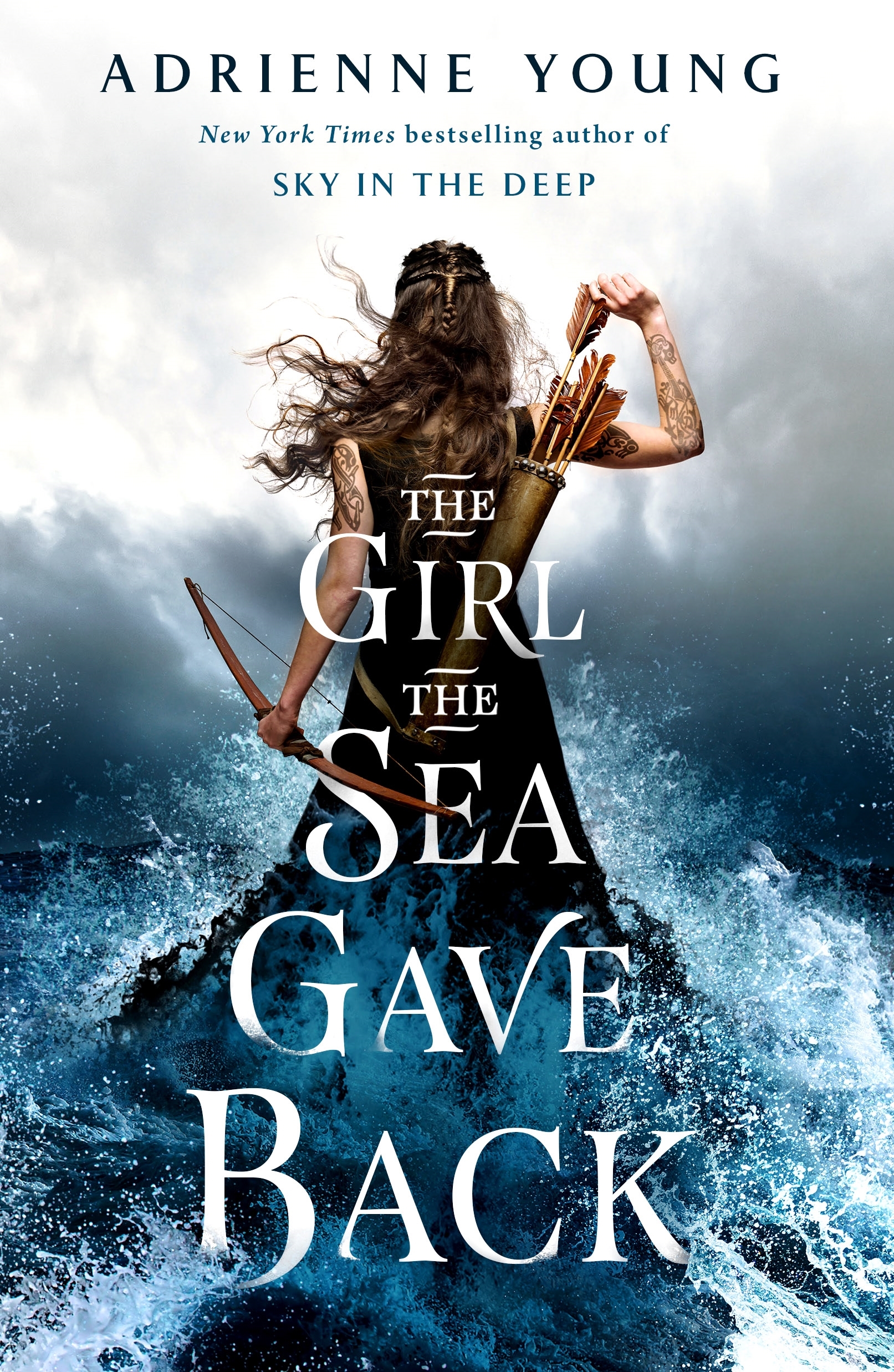 NX: Can you give us any teasers of what we can expect from your next book, The Girl The Sea Gave Back? It’s a standalone set in the same Viking world, ten years after the battle for Hylli – does that mean we’ll get to spend more time with Eelyn, Fiske and Iri?

AY: I am so excited about The Girl The Sea Gave Back! The story follows Halvard ten years after the events of Sky, so he’s eighteen years old and the world has evolved from what it was before. We meet new clans, there’s a new main character alongside Halvard, and while the story really belongs to him, we do get to see Eelyn and the gang again. The family is still very much the sun in Halvard’s solar system so they had to play a role. One thing I’m really looking forward to sharing with readers is the flashbacks. We get to go into Halvard’s memories several times throughout the book, way back even before the time of Sky In The Deep. The really cool thing about these scenes is that we get to see a lot more of Fiske and get a lot of important context for who he is when Eelyn meets him. It was really fun to write.

NX: Who are your favourite authors?

AY: I have so many, so I will limit this list to YA fantasy. The ones that immediately come to mind are Laini Taylor, Holly Black, and Leigh Bardugo.

NX: Finally, what are you reading right now and what’s on your TBR list?

AY: I’m just about to start Serpent & Dove, which I’ve really been looking forward to and after that, I’m hoping my ARC of Ninth House will be here! I’m so excited to read both.