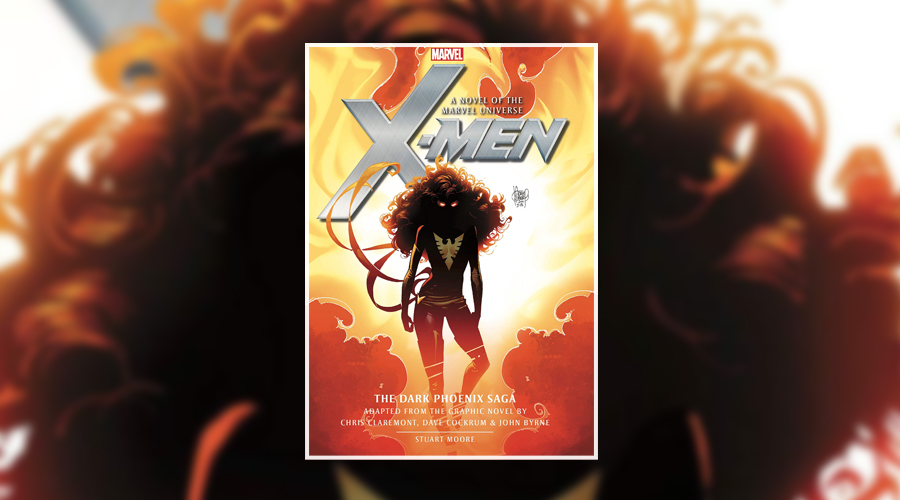 Novelisations are hard to get right, even more so when the original source material is so well known. Stuart Moore does a great job of tackling the much-loved tale of Jean Grey’s demise and return as The Phoenix. Based on the comic book run by Chris Claremont, Dave Cockburn and John Byrne, The Dark Phoenix Saga is a novelisation of the graphic novel, taking a more ponderous approach to this storyline, using the power of hindsight to weave a tale that’s both familiar and layered with a few new takes.

For the entry level reader, those who know the X-Men characters through the latest movies, or perhaps those who haven’t dived into some of the more classic X-stories, The Dark Phoenix Saga is a jumping-on point in the lives of the second, main generation of X-Men. Cyclops continues to lead the team, under Charles Xavier, with Storm, Nightcrawler, Colossus, Wolverine and, of course, Jean Grey rounding out the team. Being at least a little familiar with the characters going in is useful, but like any good comic book, you can pick up the gist from it as a standalone.

This tale begins with the death of Jean Grey and her return as The Phoenix, then takes us forward as Jean and the X-Men become separated. Jean encounters The Hellfire Club, a notorious club with a secret agenda, which eventually leads to the rise of Dark Phoenix, a cosmic being of pure rage and hunger, whom the X-Men and an alien race known as the Shi’ar must face off against. There’s also a side story with Kitty Pryde, later Shadowcat, that gets tied off a little in this novel.

Why choose this book over the original graphic novel? That’s the obvious question when it comes to this kind of adaptation. In that, we have to consider the uniqueness of novels and their ability to spend time with characters, to draw out descriptions and show us the unseen, in the same way that a comic book artist will compose the image to showcase certain aspects. The dazzling imagery gives way here to a deeper look at each familiar scene. We languish in Jean’s mind, getting a taste of how her thoughts run over her emotions. We’re offered insight into the actions of characters like The White Queen, Emma Frost, who originally had a simple, villainous role, but who in the years to follow in the comics revealed her complexity. This is a reading of the comics, if, ironically, we could read the characters’ minds.

It’s no surprise that this novelisation is coming out now, paired with X-Men: Dark Phoenix, which is set to be latest X-Men movie in the soft reboot series that started with X-Men: First Class. The new audience that’s grown up with these X-Men have a different understanding of values, like feminism, which is tapped into for this version of the story. Moore doesn’t shy away from that and adds it to his retelling. Perhaps the Jean Grey of the 80’s wasn’t so aware of her own power and place in the patriarchy, or at least wasn’t allowed to give voice to that, but in The Dark Phoenix Saga we’re allowed to imagine that she did.

Adding in modern thought isn’t the only way in which The Dark Phoenix Saga strays from the original. We have the internet and cell phones that do much more than they could before; little steps towards technological advancements that place this story closer to the present. They’re used sparingly however, so the story isn’t changed much by the inclusion of this future-tech.

Overall, this is a story told well, and the movement between storylines doesn’t feel like it loses its way. It moves at a brisk pace, while still offering stays in key points to illuminate what might have only been a few panels on the page. If you’re eagerly anticipating X-Men: Dark Phoenix or simply fancy returning to this classic tale again, this is a good book to pick up.

X-Men: The Dark Phoenix Saga Prose Novel is published by Titan Books on 14 May 2019