Those still struggling to hold back the sobs having mourned the passing of Studio Ghibli should dry their eyes, for there’s still some magic to be found in the Temple of Totoro. Although for the first time in their auspicious careers as animators, the Ghibli team find themselves acting as creative assistants to another sorcerer here: London-based Oscar-winning filmmaker Michael Dudok de Wit.

Considered solely from the surface, de Wit’s story tells of one man’s struggle for survival; a nameless castaway who we meet fighting to keep his head above water after his boat capsizes in the midst of a great storm. Stranded on a deserted tropical island, the man endeavours to escape on a raft built from the bamboo trees that scatter his surroundings, but all attempts to break free are hampered by the appearance of a giant red turtle, who refuses to left him pass.

Isolated and alone, the man contemptuously considers the turtle an obstacle to be overcome, but through his anger, we see the affinity these two mammals share. As a director, de Wit tells his tale with a calm, wordless sensibility – stripped of dialogue, it is, in effect, a silent film – that leaves its meaning open to many interpretations, but in its purest terms, The Red Turtle is a lament on loneliness, longing, and the life cycle that reads as a spiritual correlation between Pixar’s Wall-E and Nicolas Roeg’s Walkabout. 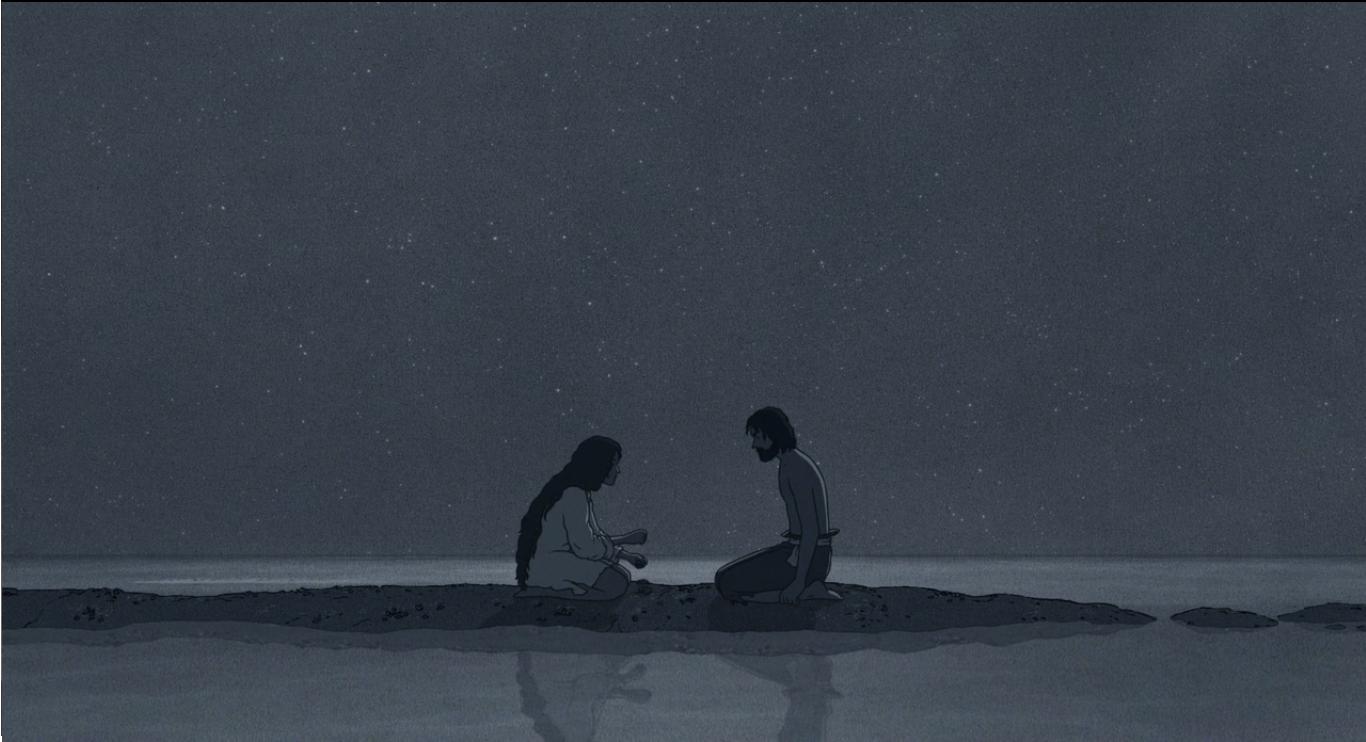 In de Wit’s eyes, as it was in Roeg’s, nature is itself a character. The distinctive and diverse range of sounds we hear, from the rustling of trees to the crashing of waves, immersing us within a world of wonder. This desert island may not be a paradise, but it is a place of peace, a hauntingly serene, hand drawn habitat that teems with life and brims with beauty.

As our castaway adapts to his new existence, he finds himself followed wherever he goes by a cast of sand crabs. Mentally, however, he remains imprisoned by an inescapable solitude – his yearning for a companion heard in every aching note of Laurent Perez Del Mar’s surging score. That is until a young woman mysteriously appears on the beach beside him, breaking the shackles of his seclusion.

It may not hold a candle to some of the Studio’s strongest offerings, but similarly to many entries in the Ghibli canon, The Red Turtle is a film that enchants with a meditative refinement that tugs at your heartstrings with harmonic frequency. The relationship that slowly develops between this man and woman is not one defined by love, but by life – an intimacy that we all share. In the eyes of each other, and the audience, they are two characters that say so much, without ever speaking a single word.

Camden Rocks 2017: 5 acts to check out at this year’s festival