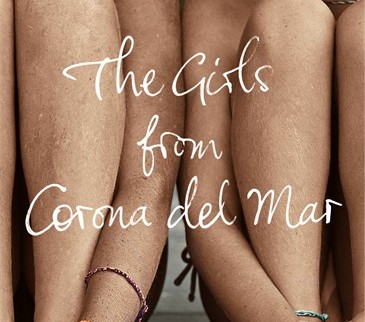 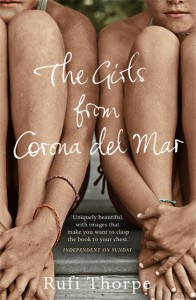 Female friendships are notoriously rocky roads to navigate. They can bring lasting joy and companionship, but they can also be complex and toxic. Never is this more apparent than in Rufi Thorpe’s The Girls from Corona del Mar.

The story follows lifelong friends Mia and Lorrie Ann whose lives unite and separate as they go from the innocence of youth to the hardships of adulthood. Mia’s childhood is riddled with unpleasantness and mistakes; her mother is a drunk, her father cares only for his own happiness, and she has two brothers who she loves deep down but can’t be nice to. While Mia deals with her screwed up family and an abortion at fifteen, she’s held together by Lorrie Ann, her seemingly flawless and fiercely moral best friend.

As they grow up, Mia’s life goes from strength to strength as she breaks free from her family and pursues her love of ancient languages. Lorrie Ann’s world, however, takes a downward spiral that not even she can escape from unscathed. Watching her best friend change in the wake of a succession of tragedies, Mia is powerless to stop the domino effect and becomes more of a spectator than a participant in Lorrie Ann’s life.

The Girls from Corona del Mar is very much a story about how friendships evolve as girls become women and have to make difficult choices that define their futures. It’s a superbly written novel, with a natural almost conversational tone that makes for an easy read despite the often hard-hitting subject matter. It’s an inherently feminine story about the pulls of friendship and that intrinsic loyalty women who’ve known each other their entire lives have towards one another.

Normally, friendships between girls are stowed away in boxes of postcards and ticket stubs, but whatever was between me and Lorrie Ann was not so easy to set aside.”

What’s so disarming about this book is that I never particularly warmed to either of the story’s central characters and yet I could still connect with them because of Thorpe’s realistic portrayals of woman as they grow up and experience how unfair life is. I sympathised with the duo’s hardships, commiserated with their losses and felt joy when they experienced moments of fleeting happiness. These weren’t just characters, they felt like real people, and I cared how their lives turned out.

Mia is the book’s voice and it’s a strong and scholarly one, but by self-admission she isn’t necessarily a good or virtuous person. She sees herself as a bit of a black sheep, a cold-hearted woman who’s not worthy of the friendship she has with her best friend, who she’s adored and idolised since childhood. Lorrie Ann, on the other hand, is a character I started off liking because it was impossible not to, but I quickly became frustrated by her. Mia’s descriptions of her angelic bestie’s youthful charm and innocent kindness were irresistible; we’ve all known a Lorrie Ann, a girl whose enviable life seems utterly perfect from the outside.

Yet out of the two women, it’s Lorrie Ann who suffers life’s cruelties the most. Despite the heart breaking misfortunes she faces, Lorrie Ann is a character that just surrenders to her fate and admits defeat. By the end, Mia realises that perhaps this perfect image she had of Lorrie Ann was something of her own creation. She saw what she wanted to see as a remedy to her own flawed life. But Lorrie Ann’s destructive path as she stumbles from one disaster to the next – her life quite literally unravelling – could very well be the result of a pain and suffering that Mia was never even aware of. In the spirit of being true to life, we never do discover the reasoning behind Lorrie Ann’s self-destruct switch.

If I had been so blinded by the idea of Lorrie Ann that I failed to see who she actually was, I had been just as blinded by who I thought I was.”

Thorpe’s characters are multi-faceted and fully fleshed out but when they’re laid bare like this, it’s a shame that they’re never given a proper resolution to their story. I became immersed in Mia and Lorrie Ann’s lives and to not know how their stories end is unsatisfying. Perhaps this is Thorpe’s intention though, and the end simply reflects the theme of the book. Life doesn’t always deliver a rewarding ending, sometimes we never know what becomes of people, they just go on with their lives and so do we, and eventually the friendship becomes a memory that we mould to fit the way we want to remember it.

The Girls from Corona del Mar isn’t a happy or uplifting read, in fact much of the story is told with brutal realism, but I simply couldn’t put it down. There’s a magnetic and moving quality to Thorpe’s writing that had me hooked from start to end. An absorbing story of female friendship in all its ugliness and beauty, it comes as no surprise that Rufi Thorpe’s book was longlisted for the 2014 Dylan Thomas Prize. It might not have won the award but this debut will win readers hearts.