Don’t expect The Final Year to be about Trump. With unprecedented access to The White House in the final year of Barack Obama’s presidency, Donnie inevitably makes an appearance. But this isn’t about the election, Hillary’s campaign or the reasons behind that fateful vote in September. This is a moment to go back in time and relive the integrity, purpose and passion of Obama’s administration in 2016. Between the politics on show, we also see cockroaches on the floor of the West Wing and view John Kerry trudging up the steps of Air Force One after a very long day. When Trump does come up, in many instances, he is dismissed. It seems as if, in Washington, no one had any idea what would happen.

Ben Rhodes, Obama’s go-to Strategic Communications Advisor certainly didn’t. His assuredness of the Paris Agreement remaining intact cannot help but bring a chuckle to the audience. Samantha Power, United States Ambassador for the United Nations, simply didn’t have time to consider it. Within the brief opening credits, we speed through 2008 to 2016. The team behind Barack Obama’s historic campaign became the very people who then entered the White House. They were professionals in their field with expert skill sets and an integrity that would ensure they would be vital members of the team.

Everything is exciting and hopeful, and this final year continues driving forward the progressive values of America. John Kerry, Foreign Secretary, is globe-hopping around the world, building and cementing relationships that will outlive presidencies and people. His background of fighting wars, protesting wars and reconciling differences between countries is simply unbelievable. Samantha Power is on the ground, speaking face-to-face with victims of Boko Haram. Ben Rhodes is writing speeches that Barack Obama will read. Speeches that are unprecedented, as Obama speaks out and faces the horrors of America’s history: Laos, Hiroshima and so forth. 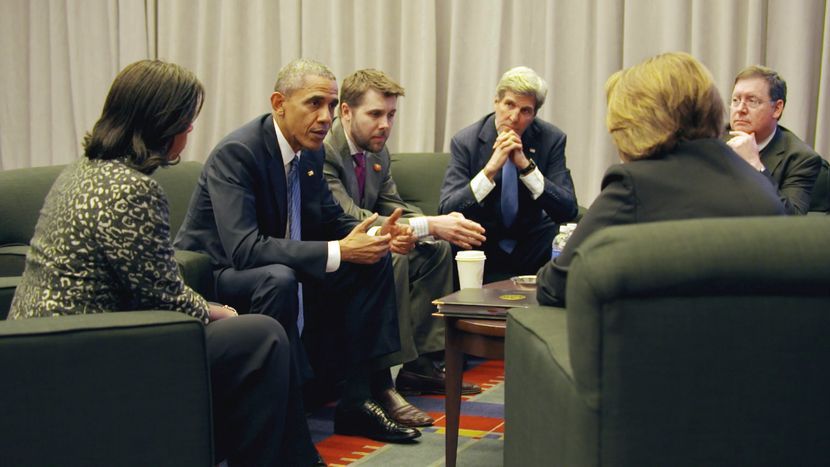 These moments will be in history books as relationships with countries are rectified and strengthened. The Final Year cannot be considered an unbiased, critique of Obama or the American political establishment. This is a celebration of the type of belief system and transparency that a government could, and should, be. Rhodes, at one point, becomes angry when a meeting between China and America, discussing climate change and the global economy, is not considered important in the US; news outlets choose Trump and ISIL to become the primary focus. In another instance, the sly question “What’s more important? Climate change or ISIL?” requires the answer “both are important”. In reality, of course, climate change has the potential to kill millions of people worldwide. But, if the truth was spoken, the right-wing press would have a field day.

“How can we be great like you?” asks a Chinese student at one of Obama’s famous Q&A sessions. It is a little on-the-nose perhaps, but can you imagine Trump being asked the same question? After 8 years of his Presidency, Barack Obama is still considered an icon; a role model to millions across the world, not just America. Considering how we, in the UK, have seen the fall from grace someone like Tony Blair has had, this is an enormous achievement. We can’t go back in time and play 2016 out again, and we can’t ignore the people who were left behind. But the honesty, rectitude and principle of these men and women remain the goal for the future. We are in the midst of a chaotic period with regard to politics but, though you may worry that tears of regret will close the film, The Final Year manages to fill you with hope and optimism. Tears of joy are what will make your heart soar in the closing moments of The Final Year, and in 2017 that is precisely what we need.