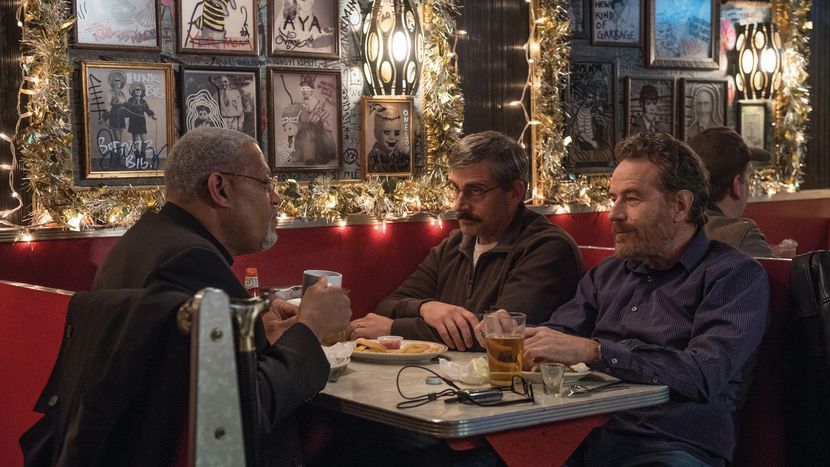 Richard Linklater has always been a director and writer to question. Slacker is questions and answers; thoughts and talking, back to back. Waking Life is, similarly, conversations on dreaming and life itself. The sublime Before Sunset series is a relentless conversation between lovers, detailing every facet of their relationship. Last Flag Flying is, first and foremost, a conversation. The beast of the military is intertwined with ideas of patriotism, masculinity and war. But when someone is killed in action, there is a consequent question regarding whether the war was necessary at all. With that in mind, three Vietnam veterans meeting for the first time in decades will stir up so many hypocrisies and conflicts. Linklater makes us the fly on the wall to every thought that crosses their mind.

It is December 2003. Larry Shepherd (Steve Carell) unexpectedly turns up at Sal’s (Bryan Cranston) bar. Larry says “you don’t recognise me, do you?”. Sal looks him in the eye, sizing him up before shouting “Doc!”. It turns out that Larry and Sal both served together in Vietnam and, toward the end of the war, Larry was in “the brig” for a crime in the final stretch. Together they enjoy beers and reminisce before Larry coaxes Sal to come with him to see something. What they see, after a long drive, is a preacher (Laurence Fishburne).

Passionately extolling the virtues of honesty, integrity and belief in the Lord, Reverend Richard Mueller served alongside the guys and, back in the day, he was a demon. This is an unrecognisable Mueller to Sal and Doc. But Doc has a hidden motive toward finding these two veterans. In January, his loving wife died from breast cancer and only weeks prior, his son Larry Jr was killed while serving in the marines, in Baghdad. He hopes the three of them, together, can bury Larry Jr in Arlington Cemetery. 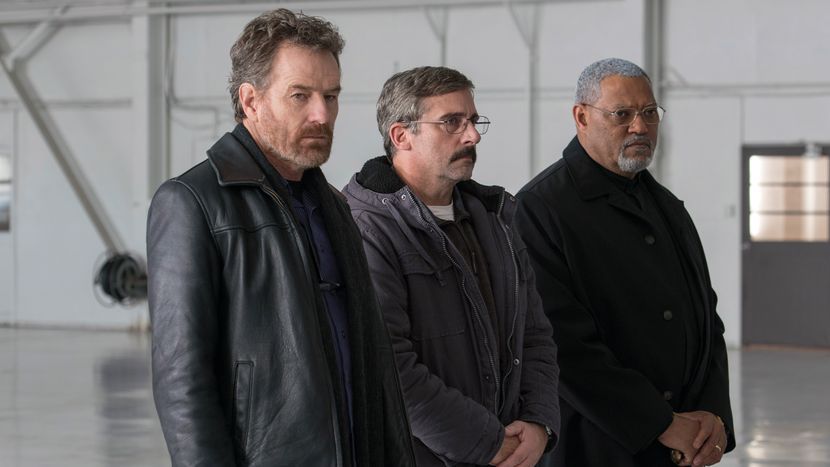 Steve Carell, playing a man deep in mourning, is delivering one of his most restrained performances in Last Flag Flying. There are no eccentricities or angry outbursts, just a quietly spoken, ex-soldier reflecting on his life. Laurence Fishburne and Bryan Cranston are the driving force behind this dramatic road-movie. As a preacher, Fishburne has an authority and experience that oozes trust and respect (we’ve seen him play a different preacher in The Matrix). Clearly, he has faced his past (and the many sins) head on and is therefore challenged by the prospect of re-joining old friends from ‘Nam. Bryan Cranston, on the other hand, plays a cynical, brash and arrogant alcoholic. The two roles of Mueller and Sal are like the devil and angel on the shoulders of Doc. Considering these attitudes and opinions are the core of the film, it is vital that each perspective is believable – and they truly are. It is difficult to deconstruct Last Flag Flying and position it as anti-military or not. It is anti-unnecessary-wars, but we’re all against that.

The performances provide the foundations for conversations outside the cinema screen. The reality of war is how some people, unnecessarily, are killed. Surrounded by testosterone and alpha-males, it is inevitable that brothels, drinking and drugs are exploited. But still, they are heroes. There is an extended period whereby soldiers are left among those who despise them in a foreign land, with disastrous consequences. But still, they are heroes. But when is a death honestly acknowledged as the fault and responsibility of the military itself. The system is not perfect and Linklater is shining a light on the flaws and raising unspoken questions.

Last Flag Flying positions the old versus the new; faith versus realism and tackles the thorny subject of patriotism. Between all these arguments and posturing, there is a camaraderie that ekes out: a brotherly love and trust that all servicemen will relate to. There are points, when Sal confronts the Colonel’s position of authority, when it feels like a fuck you to the forces. But, when the three buy mobile phones – remember, 2003 barely had mobile phones – their age and affability overpowers any anger we had towards their actions.

Even generationally, there is an understanding between soldiers and veterans that in hilarious discourse, we can’t help but be enamoured by. Last Flag Flying is a comfortable journey, with profound, intelligent and personal discourse that will force people to talk. The best of Linklater always raises questions rather than answers. Last Flag Flying raises enormous questions and refuses to let people off the hook. There is a need for the devil and the angel can sometimes cause great harm and that is a difficult pill to swallow.