The Animals of Farthing Wood – The Complete Series Review

When it was announced that The Animals of Farthing Wood was being released on DVD I was overcome with waves of nostalgia for a cartoon that I had curiously fond memories of. Back in the mid-nineties when it was on CBBC, my sister and I not only watched it religiously, but we bought the magazine monthly and even owned the playset. It wasn’t only us who held this series in such regard – there have been multiple petitions online to get in onto DVD by people who were just as affected by the series. So now that it’s finally available, does it hold up to those memories?

When the discs came through, I made myself a hot chocolate, hunkered down in my duvet and binge-watched the whole thing back to back. If you haven’t seen the series before, it’s based on a series of books by the same name. The animals of Farthing Wood are forced to flee their homes after humans start to destroy the wood they live in to build houses. Led by Fox, and guided by Toad, the animals leave Farthing Wood and go on a journey to White Deer Park, a nature reserve where they would be protected. So far, so twee, right? Wrong! What sets The Animals of Farthing Wood apart from most children’s cartoons now is the almost relentless realism within it; yes it’s talking animals, but much like the way Watership Down scarred us all for life, Farthing Wood explores the themes of death and loss really effectively.

Even in the first episode, the newts are away from the water and dying slowly before us and throughout the series the characters go through so much; there are violent deaths (baby mice being impaled) and one death in particular still made me blub into my pillow, badger dying of old age. The wise grandad of the group finds a set, curls up and dies in front of all of his friends; it’s a really sad moment that changes the character of Fox quite a lot. Fox relies on badger for reassurance and also his wisdom, and the character is forever changed after he dies. Much like we all are when a parent or carer leaves us.

The voice acting is a little ropey in places. The weasel in particular has the ability to make all these moments seem less poignant with one screechy bizarre cockney word and the kestrel does become grating after a while, but on the whole each character is well developed and fleshed out. The music is an integral part of this cartoon; classical scores that help convey feelings effectively and delicately helping move the plot along excellently. The plot is also solid, although as it nears the end it does lose some momentum and feels a little bit less action packed, focusing more on characterisation than plot, which is a slightly muddled way of storytelling. 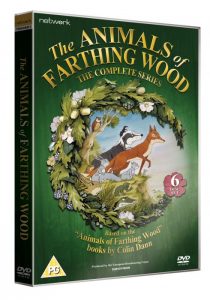 I still love the animation style though – its stark colour pallet changes are visual clues to the danger the characters are facing and the traditional methods of animation are a refreshing change to the computer-generated brightness we’re used to now.

Overall, I really enjoyed this trip down memory lane with these characters. It’s well worth a watch if you didn’t see it the first time around and it’s a great series to show children. Yes, it is harrowing in places but it also explores huge themes in a way that is accessible and the feeling of being on the journey with the characters makes you really invested in their plight. I can’t wait for my nephew and niece to be old enough to watch it and get the same feeling of excitement me and sister got when we were younger.