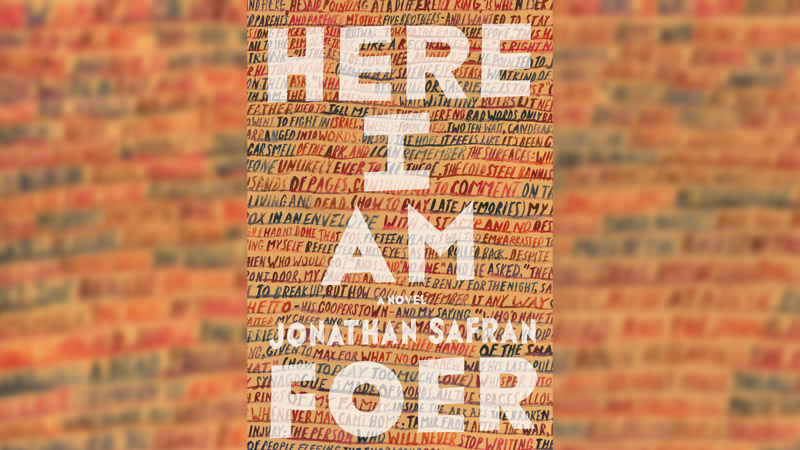 With its 500+ pages and its jarring opening line – “When the destruction of Israel commenced, Isaac Bloch was weighing whether to kill himself or move to the Jewish Home.” – Here I Am by Jonathan Safran Foer is rather an intimidating novel to get your head around, and it’s a feeling that’s very hard to shake when you actually get stuck into the story too.

Ostensibly, at its core (and as per its blurb), Here I Am is a story about family, and the Bloch family in particular. We open with Julia and Jacob Bloch being informed that their son Sam has been accused of writing out racial slurs and that his upcoming Bar Mitzvah will be called off unless he apologises for doing so. Jacob and Julia’s disagreement over whether Sam is telling the truth when it comes to denying having done anything turns out to be the least of their concerns as Foer’s writing soon picks at threads that reveal the Blochs’ marriage – and their family – is being held together quite tenuously.

And as Jacob and Julia’s marriage falls apart, and Sam wrestles with the responsibilities and changes that go with becoming a man, and youngest sons Max and Benji approach the entire situation with a wisdom and an understanding that’s often beyond their years, a crisis unfolds in the Middle East as Israel is first levelled by an earthquake and then threatened further by destructive and political forces.

“All communication had become subterranean: shifting tectonics, felt on the surface, but not known.”

So, what begins as an exploration of a domestic crisis soon sprawls outwards to consider themes of identity, religion and Jewishness, but also how the biggest, earth-shattering experiences of an individual can be justified and felt against global problems of poverty, disease and war. All of which, of course, is incredibly ambitious and can make for a heavy-going, yet no less interesting, read.

There are many parts of this novel that are done extremely well, and the nuanced depiction of each of the characters is a prime example. There is no character in Here I Am that appears two-dimensional or underdeveloped, but when it comes to Jacob and Julia Bloch in particular, that attention to detail manifests into a well-realised and intimate portrayal of a married couple, flaws and all. Wants, desires, mistakes, hang-ups… everything that goes into the making of a person is poured out onto these pages in a true imitation of life, revealed through conversations, streams of consciousness and memories that are described so minutely that there is a palpable tension between these two characters.

And, as we already know from his work on previous novels Extremely Loud and Incredibly Close and Everything Is Illuminated, there is no denying that Jonathan Safran Foer has an incredible, unique and memorable writing style. In Here I Am, it is the conversations that really sell this, rife as they are with realistic, tangential dialogue that truly sells the Blochs as a family unit. Unfortunately, to hit this level of true-to-life form, conversations are long, and often without purpose which feels a little unnecessary in a novel of such epic proportions – which turns out to be a fitting summary of the novel as a whole. It’s an epic, no doubt, and forces you to consider many difficult questions about yourself and the world around you, but mostly it just feels a little too grand with a few too many ideas thrown in a little too haphazardly to make reading this an enjoyable and coherent experience.

Here I Am is a strong and interesting novel, that’s darkly funny, touchingly poignant and a masterful recreation of family life but it is so unashamedly A Novel that it is also jarring and difficult to read and really give yourself over to all of the many strands being discussed.