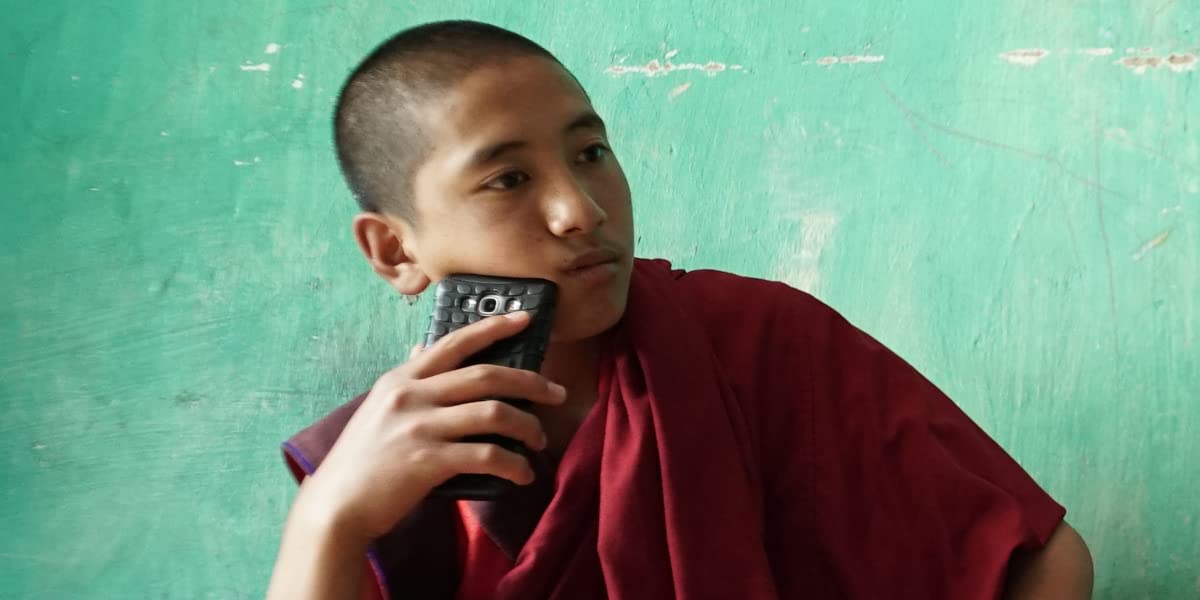 When we first meet Peyangki, he is eight years old and in training to become a monk. He lives in the tiny Bhutanese village of Laya, high in the Himalayas, which is about to become one of the last places in the world to get access to the Internet.

Ten years later, we see a now-grown Peyangki be awoken by an alarm on his mobile. He and the rest of the young monks have become phone addicts, much to the chagrin of their elders. Through the Internet, he’s forged a romantic connection with Ugyen, a singer who lives in the comparative metropolis of Thimphu, Bhutan’s capital. When they finally meet in person, he discovers that she hasn’t been quite honest about her circumstances.

Sing Me A Song is a visually ravishing documentary. Director Thomas Balmès makes excellent use of the contrast between the monks’ crimson robes and the striking mountainous landscape against which much of the action takes place. There’s a poignant sort of comedy in the juxtaposition of the monks in a series of scenarios that could make them seem like a group of boys in any corner of the world: gathered together watching football, sat outside waiting for an arcade to open, sat as a big group while they all ignore each other and play games on their phones.

Often it appears as though Sing Me A Song would have worked better as a photography book than an actual documentary, because when it comes to narrative, Balmès’ film is lacking. Perhaps it’s because this is the second movie he has made about Peyangki (the first was 2013’s Happiness) and so the material isn’t fresh to him anymore. He doesn’t make a lot of effort to re-establish Peyangki’s character or imbue much meaning to what we are seeing. There seems to be a vaguely anti-technological sentiment here – as Peyangki falls asleep in front of a video game, Balmès imagines he is dreaming of his idyllic internet-free childhood, laying peacefully in a field surrounded by the stunning Himalayas – yet we never get a real sense of what he’s meant to have lost; yes, the new technology has changed his life, but what are the ramifications? Answers aren’t forthcoming, and his thinly-drawn relationship with Ugyen is also hard to parse.

Of course, a director doesn’t have to impose his opinions in order for their film to be worthwhile – sometimes it can be nice to be given the space to make up our own minds – but the absence of evident intention can give a documentary an unfortunate sense of listlessness, and that’s what happens here. Frankly, it becomes a bit dull.  It doesn’t help that some scenes are so clearly staged that you can’t even give yourself up to the idea that what you are witnessing is organic. The images are rapturous, and there are nice little moments along the way (Peyangki’s sweetly naive best friend is a continuous source of delight), but the lack of purpose at the centre of Sing Me A Song means it’s never quite as absorbing as you want it to be.