Sequin in a Blue Room is a queer story about a young man’s exploration of his sexuality in the age of dating apps. It offers a lush view of the good and a searing warning of the bad that can happen when using gay dating apps for casual sex.

Sequin (Conor Leach) is a 16-year-old in Australia who whiles away his free time hooking up with random people on the app, Anon. Despite having a friendly and understanding father and classmates, he’s a reclusive and distant person who often comes across as inconsiderate. He seems devoid of feelings on the surface.

Only known in the film as Sequin, the name comes from the silver sequin top that he wears to all his meet-ups. It covers his chest and shoulders like a piece of armour. It’s also an intriguing choice; it’s present in his profile picture and rarely taken off during his encounters, given he is using an app for anonymous sex where no-one has a real name. His signature bit of clothing makes him immediately identifiable.

Leach plays Sequin with a natural mastery of his face and body. He can be acting closed off, trying to seem like the one in control even when Sequin gets out of his depth, but Leach plays it with these subtle cracks that show Sequin’s fear plainly to the audience. He can be aloof in one moment, then relishing someone’s touch in the next.

Sequin in a Blue Room feels like a cautionary tale for queer youth, particular young gay men. It’s a fairytale, but more the Grimm kind, with intimate and ethereal sex scenes which become more dark and visceral as the film progress. It teases the fun and freedom of casual hook-ups, one-on-one and in group scenarios, but then becomes immersed in stalking, coercion and rape. It doesn’t gloss over the real dangers of some of the scenarios Sequin finds himself in, but also shows clearly what he gets from the good ones: memories he can revisit with glee.

As a film about the gay hook-up apps and the modern teenager, it does a balancing act that few queer films do by showing the soft and hard sides. While Sequin’s dalliances take him to strangers houses and beds, into places he’s not safe but never fully realises, we also see his school life which is mundane and safe, and where he also has prospects. 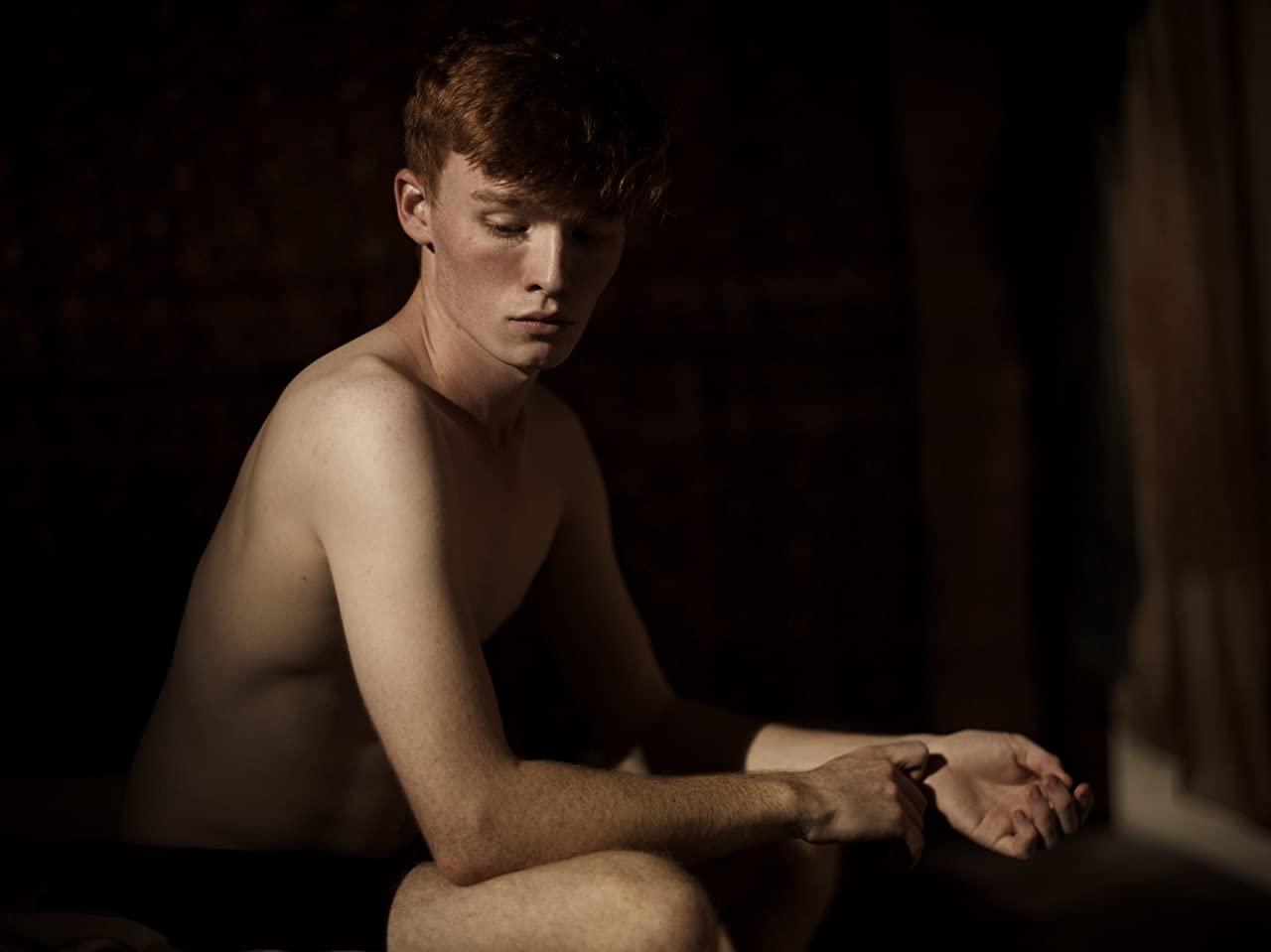 Sequin’s classmate Tommy (Simon Croker), a hopeful suitor of Sequin, could be the subject of another film entirely. Tommy is sweet, hopeful and nervous, all the things you associate with first loves, particularly on film. Croker is endearing but not needy as Tommy, so it’s easy to see how Leach’s Sequin warms to him. By having both Sequin’s exploits on Anon and this maybe budding romance with Tommy, it seems to create a whole that is a bit more truthful than either half is alone.

Although many of Sequin’s Anon interactions are with older men – some closeted, most of whom feel predatory and dangerous, quick to exert physical control and uninterested in consent – Sequin does also meet Virginia (Anthony Brandon Wong). Virginia presents with a face of drag makeup and an easy grace. They become a waypost for Sequin away from his dangerous choices, offering some elder advice and support when it is most needed. Wong adds layers of depth to the character, which suggests past pain and familiarity with what Sequin is going through as an emerging queer person.

Director Samuel Van Grisven and cinematographer Jory Anast, the co-writers of the film, make visually captivating choices throughout. The decision to focus on the hand movements during sex scenes, then parts of the crumpled sheets, which resemble grand landscapes or waves, builds the scenes so that when Sequin recalls his hook-ups, we’re already sure of what fragments and moments he’ll remember.

There is a similar beauty to the way the Anon app messaging and profiles are displayed on screen – all very smooth, simple visuals, sliding effortlessly across the screen. The film’s use of sound is also intriguing; it’s quite dialogue light and rarely comes from Sequin. Even when there are passages of dialogue, such as in The Blue Room, we don’t hear it. It’s muffled, in subtitles, or only visible through lip reading. This adds to the sense memory of the scenes, playing out as though they are being remembered.

Sequin in a Blue Room feels authentic to the experience of young gay men today; not all, certainly, but some, and it’s this frankness mixed with passion and intensity that makes the film so captivating to watch.

Sequin in a Blue Room is available on DVD, Blu-ray & On-Demand now.