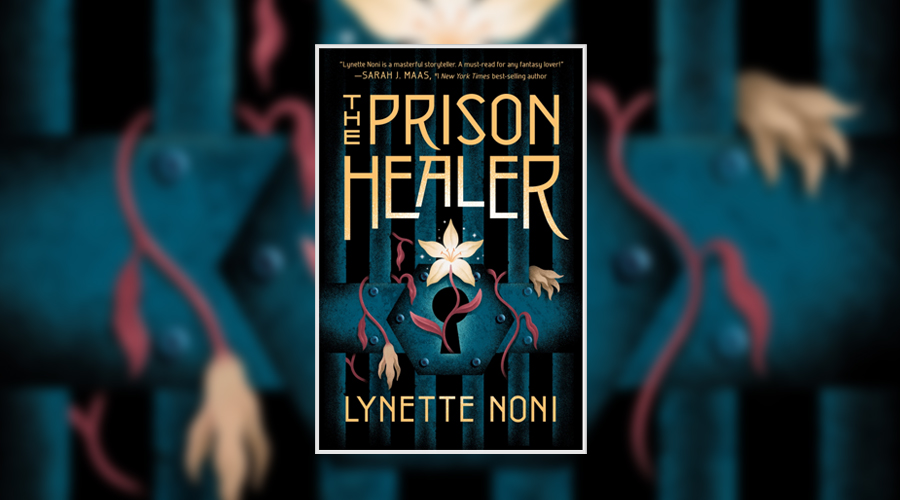 Book Review: Talk Bookish To Me by Kate Bromley

Australian author Lynette Noni’s latest book, The Prison Healer, is set within the claustrophobic confines of a death prison in winter. It centres on seventeen-year-old Kiva Meridan, who has been the Zalindov prison healer since her father died. She’s a survivor, having made herself indispensible to the Warden as an informant of sorts. It might not make her very popular with the other prisoners – or the guards – who treat her as a traitor and collaborator, but keeping her head down and doing what’s necessary has kept her going this long. Sustained by coded messages to and from her family on the outside, Kiva has one goal: stay alive long enough to get rescued.

What Kiva doesn’t anticipate is the Rebel Queen, Tilda, arriving in the infirmary at death’s door, swiftly followed by another clandestine message: Don’t let her die. We are coming. With uprising and unrest building both outside and inside the prison walls, and the sickly queen sentenced to an elemental trial she’s in no condition to partake in, Kiva makes a split second decision that will change her fate forever: she volunteers to take the queen’s place in the trials. No one has ever survived the trials and Kiva doesn’t have the magic needed to succeed. Add in an incurable plague sweeping through the prison and a mysterious new inmate who takes a shine to the healer, and Kiva is soon not only fighting for her life and that of the queen, but for her carefully-guarded heart which has been broken before.

“My name is Kiva Meridan, and I claim her sentence as my own.”

As the first instalment in Noni’s new YA fantasy series, The Prison Healer is very much a scene setter of a book. The story acquaints us with Kiva’s hard life in the prison and the duty of care she has for her patients, even those who don’t deserve to be helped. She lives under the weight of her healer father’s legacy and she dreams of escaping, of being reunited with her family on the outside. Her impulsive choice to volunteer to take the Rebel Queen’s place in the trials might initially have some semblance of sense, given the responsibility Kiva feels to save people – but it never really feels like a natural decision (the reason why being revealed towards the end of the book).

And that’s The Prison Healer’s main flaw: for all the twists and turns the story takes, it always feels a little too convenient. This is a death prison but at no point does it feel like Kiva’s life is truly is danger – even when she takes part in the trials – and it makes it difficult to form a deep attachment to the character. That goes for all of the story’s primary characters – they’re engaging enough but the book doesn’t have any particular scene-stealers. Even Jaren – Kiva’s love interest – falls a little flat until the very end. Though perhaps that’s because he’s hiding his own secrets, which keeps him at too much of a distance to really get to know and love him like we’re obviously supposed to.

The Prison Healer might have some teething problems but it’s still an enjoyable fantasy read that offers up intriguing political and magical systems (even if they’re not overly-explored), as well as a central character who’s hiding as much from the reader as she is from the people she cares about. The prison itself provides an oppressive and uncomfortable backdrop for the characters’ struggles, and Noni captures the emotional toll it has on Kiva, Jaren and their fellow prisoners really well. It’s Noni’s vivid writing that ultimately keeps the story flowing, even when the characters’ decisions feel overtly contrived and their fights too easily resolved.

The reveal at the end though – whilst seeming to come out of nowhere – deserves a star of its own simply for being such a genuine surprise (particularly after all the other obvious twists throughout the book). It really paves the way for a thrilling, action-packed sequel with plenty of complicated character dynamics and conflicted loyalties. With the key characters established and the early plot set-up out of the way, Noni can unleash her protagonist on a mission that feels even more exciting and dangerous than anything she’s encountered so far. This is a YA fantasy series that has so much promise and potential – let’s hope the next book delivers on it all.

★★★ (And an extra ★ for that brilliant curveball end.)

Book Review: Talk Bookish To Me by Kate Bromley