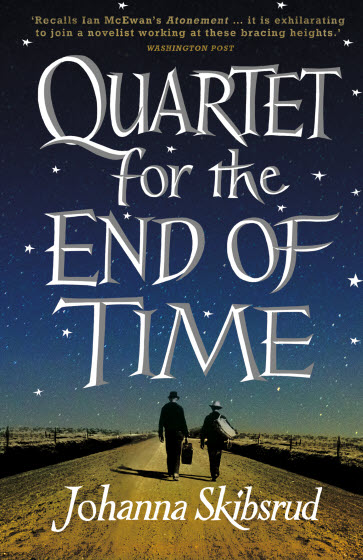 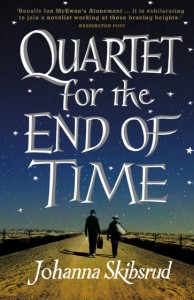 A book that claims to be inspired by a piece of music is always one to pay attention to, but one that is also structured around said piece of music has an intriguing premise that it is almost impossible to ignore. This is exactly the case with Quartet for the End of Time by Johanna Skibsrud in which, like the musical piece by Olivier Messiaen, the action is divided into 7 sections and an interlude.

At the centre of the novel is Douglas Sinclair, a veteran’s son, and Alden and Sutton Kelly, the children of a powerful US congressman, as the role they play in the American Bonus Riot of 1932 and its aftermath set the course for their future. Each section is told by a different character, and each character guides us through places and moments in time during the build up to the Second World War when the world was embroiled in a number of social and political changes and the individuals themselves are haunted by the past and their own actions. As such, Quartet for the End of Time is an ambitious novel, and also one that is somewhat limited by its own grand scope.

First and foremost, Skibsrud is writing a historical account – at times a fictional account, yes, but historical nonetheless. The novel is so weighted down in facts, figures and moments that the lives of the characters who are supposedly driving the novel are lost. Coupled with the author’s tendency to write in long and often distracting sentences, what we’re left with is a dense novel that is relatively difficult to follow and tough to build up the motivation to read.

That’s not to say there aren’t some stand-out moments that are worth your attention. Sutton’s life as a journalist in war-time Britain, Alden’s time as a spy for communist Russia and of course the recount of Messiaen’s composition of the titular piece in a German prison camp are all moments where Skibsrud’s narrative shines and where my interest really hit its peak. It’s just a shame these moments can be lost in such an expansive novel.

Quartet for the End of Time leads in with a quote from Messiaen himself, in which he says: “Time – measured, relative, physiological, psychological – is divided in a thousand ways, of which the most immediate for us is a perpetual conversion of the future into the past.” In a nutshell, this is the novel. The decisions and choices our characters make in the present determine the future and become history, and this idea is also played out in the actions of entire nations also.

The idea behind this novel is an interesting one, it’s true, but on this occasion, the inclusion of seven parts (and an interlude made up entirely of photos and diagrams) feels unnecessarily long and drawn out. If Skibsrud was determined to write about history, then Messiaen’s own experiences and journey towards the creation of his musical composition might have proven the better subject.

One for the history students among us, definitely, but fans of fiction are better off looking elsewhere.