The eponymous protagonist of Pili, played by Bello Rashid, is a young single mother with two small children working as a farmhand in rural Tanzania, and concealing her HIV positive status from her fellow villagers. On the way to work one day, she notices that there is an empty market stall. Finding out that it’s available for rent from Mr Mahela (Nkwabi Elias Ng’angasamala), the owner of the stall, she’s given a brief period to secure it with a large cash deposit. The remainder of the film follows her efforts to come up with the money, while balancing childcare and her own fragile health.

I won’t say whether Pili gets the stall or not. The film has a relatively happy ending though, at the cost of a moral compromise (on two levels; one of the people other than Pili who’ll be affected by her actions will be Mahera’s absent wife) that Pili cannot avoid if she’s to secure a future for herself and her children that doesn’t involve hard work in the fields, while struggling to pay for her anti-viral medication, until she drops.

Pili moves at a fairly slow pace, giving it an appealingly meditative and observational quality. Thematically, the plot is similar to that of Vittorio De Sica’s neo-realist classic Bicycle Thieves, where Antonio, a young Italian father struggling to keep his family afloat in the ruins of post-war Rome, desperately searches for the key to his own family’s security. Both films were made with casts consisting mainly of non-professional actors. In the case of Pili, there’s a certain impassiveness about some of the performances that could be down to a lack of dramatic expertise, but that’s neither here nor there. Mitigating against any lack of formal training is the fact that the film is performed by people for whom living with the threat of poverty and with HIV is a daily reality, much of the cast being HIV positive themselves. 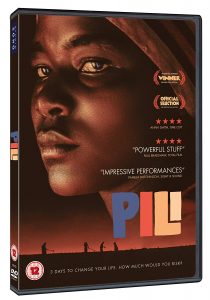 I commented earlier on the observational quality of Pili, and it’s worth returning to that. Any film that might inspire awareness, empathy or practical assistance for people in Pili’s situation should be lauded. Director Leanne Welham has avoided the trap of using the hard lives of other people as a mere diversion for the privileged audiences who’ll watch this film in the UK and elsewhere in Europe, and in North America. Maybe it’s that certain sense of being on the outside, looking at people in other circumstances in Pili that – perhaps perversely – brings us closer to empathy with other humans who have a much harder furrow to plough than we do.

Pili is an engaging film about desperation and grace under pressure; it’s well paced, well scripted and directed, and acted with engaging and convincing performances. If you’re interested in how affecting cinema can be made with a combination of a low budget, all of the above qualities, and a concern for the real lives of other people, I recommend it.

Pili is released to DVD on Monday 26 November 2018