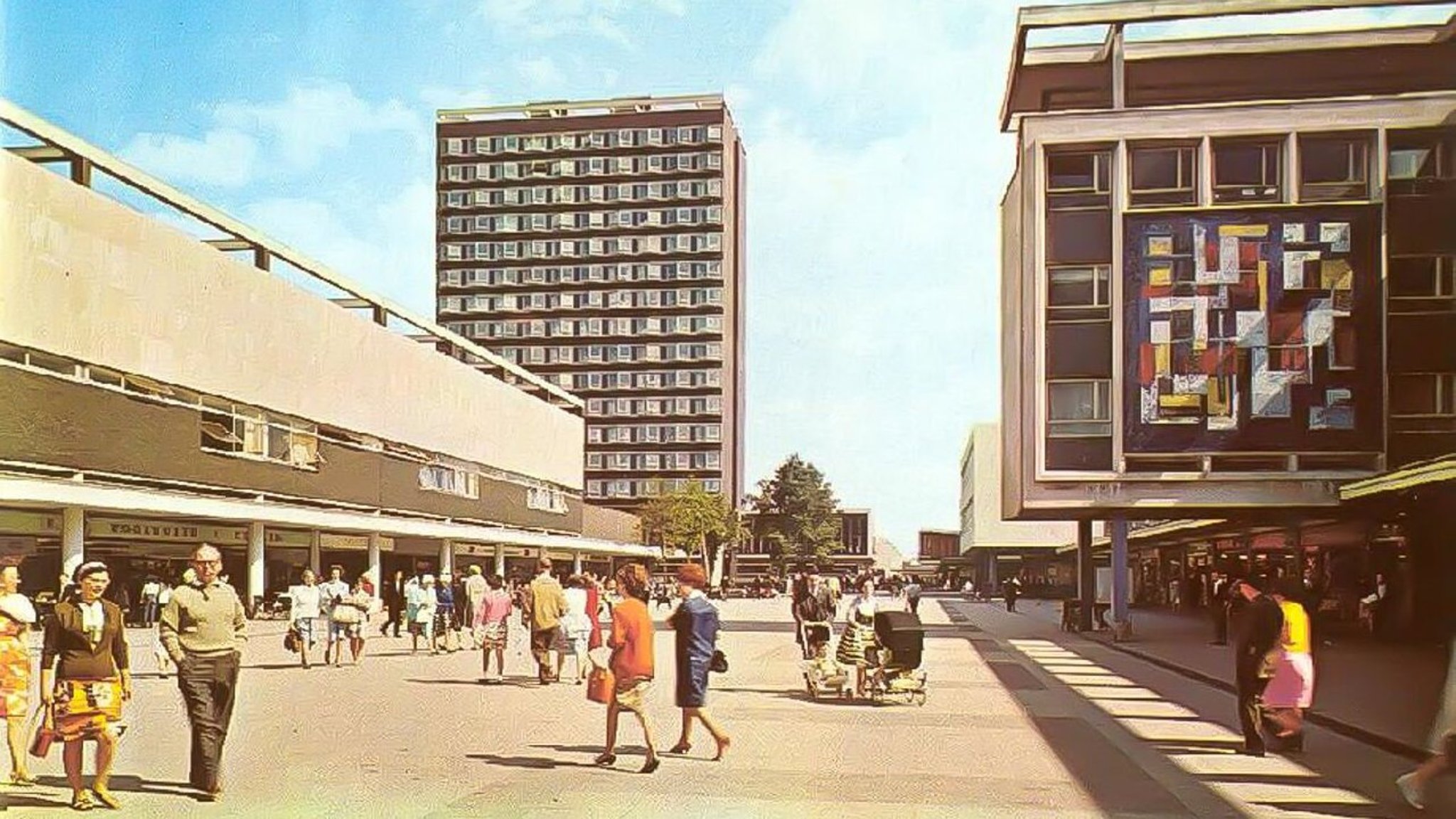 That New Town in Essex… if you were to play word – or rather concept – association and started with Basildon, what would be the first responses? Depeche Mode? Aspirational working-class Tory? Brutalist architecture? Christopher Ian Smith’s New Town Utopia delves beneath the obvious through the memories of a group of men, local artists and musicians now in late middle-age, who provide commentary on life in the town now and in their own salad days.

What’s presented is actually the story of two Utopias: one was established by Lewis Silkin, Minister of Town and Country Planning in Clement Attlee’s post-war Labour government. Silkin – voiced by Jim Broadbent – spoke quite movingly of his belief that the right physical environment, the right architecture, could improve people and communities not just economically or socially, but aesthetically or even spiritually. That might sound a little over-idealistic, but would any contemporary media-savvy politician say anything without one eye on whether he or she might look foolishly quixotic? To quote Oscar Wilde, a map of the world that does not have Utopia on it isn’t worth glancing at.

Were Silkin’s aspirations met? Probably not. Irrespective of the quality of the architecture in Basildon, particularly the handsome Brooke House, designed by Anthony Davies, most of the completed public buildings ran into the same swamp of cynicism and class prejudice as most other New Towns in the UK – use cheap materials and throw them up: the people who will live there are all overspill from dying city slums, so whatever we offer to them will be an improvement on wherever they’ve come from.

Back to the film. With a thoughtful blend of heartfelt commentary and moving camera footage, you have a real sense of what Basildon was like to be a child in, or what it was like to be young there. But I’ll come back to that later.

The second Utopia? That was Margaret Thatcher’s. A town that was filled with a politically radical population from the East End of London with a strong tradition of trade unionism and collectivism, that was nicknamed Moscow On The Thames, had by the early eighties become a leitmotif of the new Tory working class. Basildon was built – I think perhaps deliberately – without a rail connection to central London to avoid it becoming nothing more than a dormitory town.  There was enough local industry to keep the population employed, and I assume that – somewhat paternalistically – planners decided that the inconvenience associated with that decision was worth it in the interests of establishing a self-sustaining community. Interestingly, that aspiration to community independence is fairly consistent with the village or manor tradition in rural England since before the Norman invasion: the earliest record of Basildon dates from the Domesday Book of 1098. And now, you ask yourself how many people leave the town every day to work in the city, or in The City, and how much those publicly built houses sell for.

I was fascinated by this film. I was brought up in Cumbernauld, another unfairly reviled post-war New Town built to accommodate people from the East End of Glasgow. The architecture of Basildon, the sound of distant traffic on the soundtrack, the sense of openness… for me this was one of the most evocative pieces of documentary I’ve seen for a while. But it’s not for personal reasons that I’ll praise it; it’s clever and atmospheric, and the contributions from the various interviewees are thoughtful, funny, melancholy and cynical. It’s as much a study of the first generation of people who lived in Basildon New Town as children as it is of the town, and all the more touching on a human level for that.