Life of Brian has become something of a potted lesson in the tides of popular opinion. On its release in 1979 it was met with a barrage of protest, as is well rehearsed. Its barefaced parody of religion and, possibly, Jesus Christ rang all sorts of cultural alarm bells, delivering the easily-outraged a delicious Thing About Which To Be Angry and the right-on a hilarious rallying cry. ‘He’s not the Messiah – he’s a very naughty boy!’ And so a filmic touchstone was born.

With time, its message (if it has anything so po-faced) slowly morphed from rebellious to accepted and so, down the last couple of decades, to passé. Laughing at the religious is such hackneyed comedic ground that it no longer carries much currency – the truly daring have moved on. Meanwhile, cries of ‘Messiah!’ have become the more culturally dangerous ground. Life of Brian, with its penetrating vision of mass hysteria and the evils of everyday stupidity, feels to have had its day – veni, vidi, vici and now Romani ite domum.

So where does that leave us on this, its 40th anniversary re-release (or ‘we-welease’, as Pilate would have it)? Well, first off, it’s still ruddy funny. When the Pythons got it right – and in Brian they mostly did – they were in a class of their own. Set-piece sketches like the Latin lesson and the crowd’s morning audience with Brian’s mother are exquisitely timed and written. Even when you know exactly what’s coming, the delivery is so perfect, so deadpan, that the chortles come along regardless. 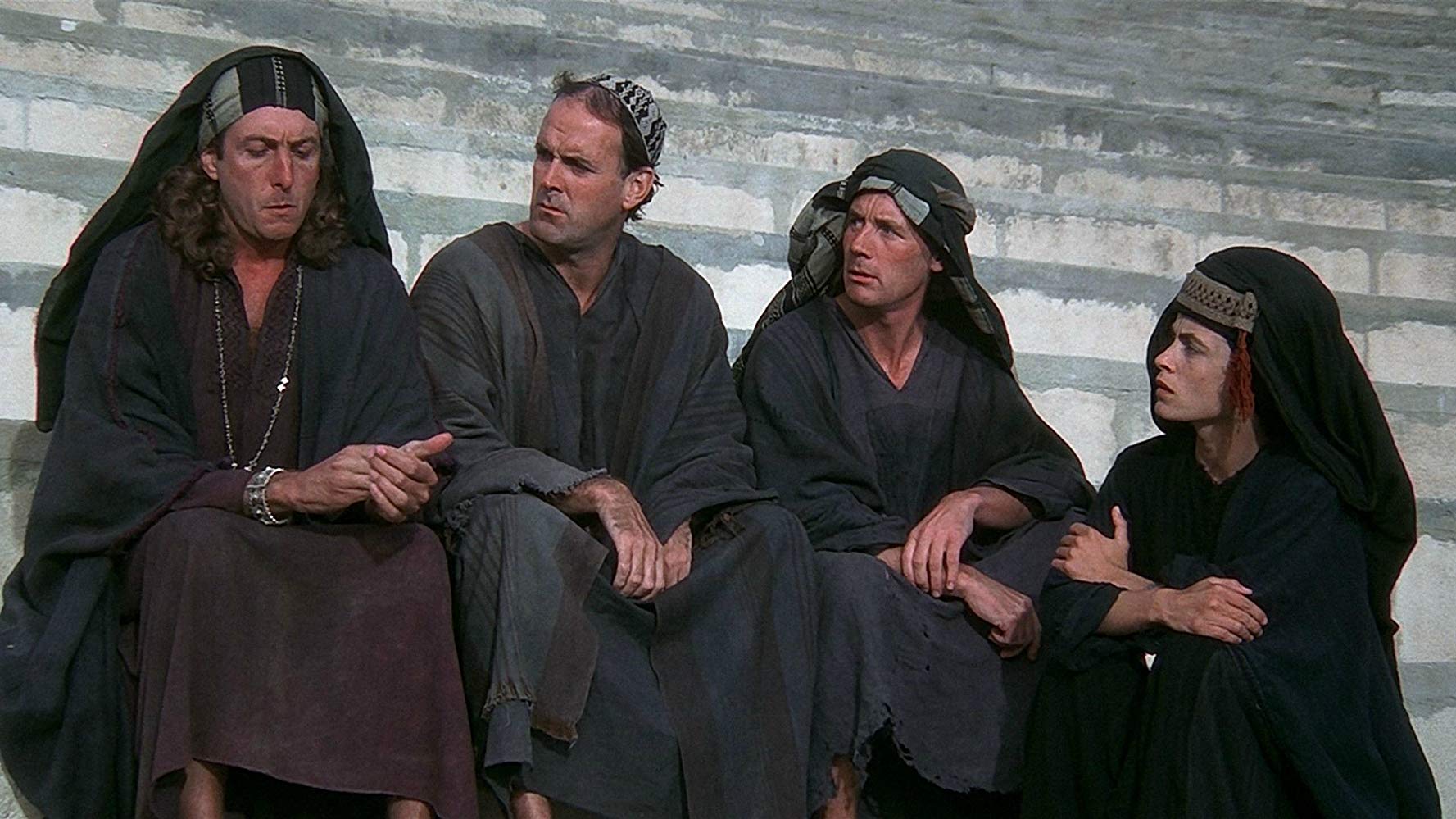 John Cleese’s ‘angry man’ bit is played just so, not driven to madness like it was in Fawlty Towers but held on the right side of the amusing line. Michael Palin’s chameleonic ability to switch from bearded brawler to twittering crucifixion attendant is a sight to behold, and Eric Idle’s none-more-chirpy East-End barrow-boy hits all the right irritating notes. Watching the film again, you’re reminded of why Monty Python is such an institution. When they were good, they were very good.

Good and prescient. The central moment of the plot, when Brian inadvertently gains a horde of dedicated disciples, is unsettling to watch in these wobbly political times. A few mumbled aphorisms, a totemic act here and there, and the Pythons have their crowd baying for blood, factioning and factioning again, calling out the heretics, swearing their allegiance to a nonsense. It’s caricature, but it’s uncomfortably on the nose.

At its heart, Life of Brian is a satire of ignorance and mob mentality. Running through it are the words that Brian uses to rid himself of his troublesome followers: ‘you’ve got to think for yourselves!’ The tragedy behind the comedy, though, is not so much that the people are being led astray as that they fling themselves at such visibly incompetent leaders. In the squabbling of the People’s Front of Judea and the Judean People’s Front, in the banal bickering at the Sermon on the Mount, in Brian’s ultimate abandonment, the Pythons look their audience in the eye and say: we’re idiots, all of us. And that’s where the darkness really lies.

There is a postscript. In the PFJ’s first appearance, there’s a brief skit on Brother Stan’s desire to become Sister Loretta. ‘What’s the point in fighting for his right to have babies if he can’t have babies?’ demands Brother Reg. ‘Where’s the foetus going to gestate, you gonna keep it in a box?’ In 1979, that was throwaway humour. Forty years later, it’s starting to smell like cultural danger. The cries of blasphemy may have died off, but there’s still just enough subversion in Life of Brian to raise eyebrows in 2019.

Monty Python’s Life of Brian returns to select cinemas around the world this Easter to celebrate the 40th anniversary of its release. Tickets are now on sale for this unmissable cinema event, taking place on 18 April. To find out more about the release and to buy tickets visit: WeWantBrian.com. 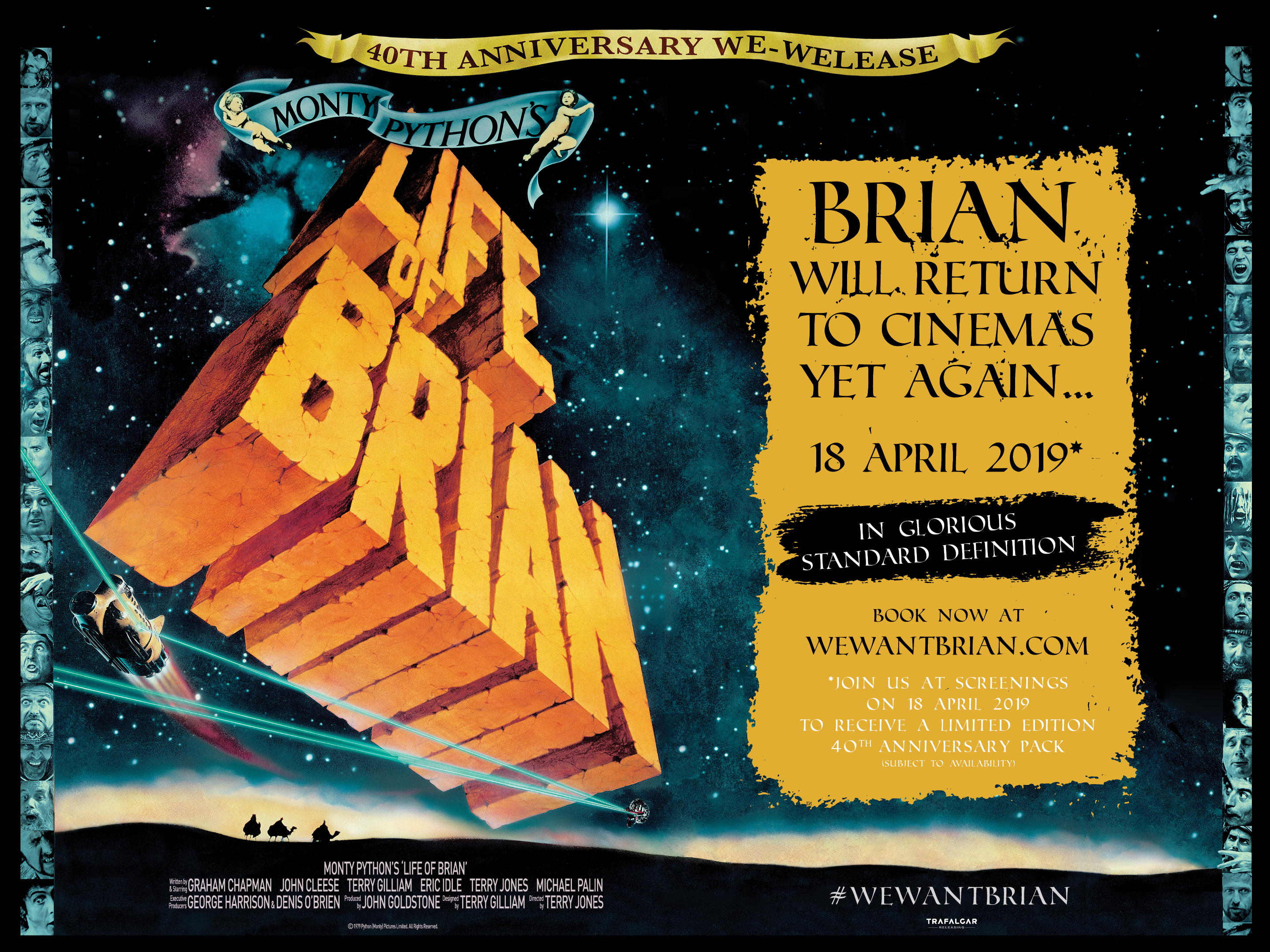