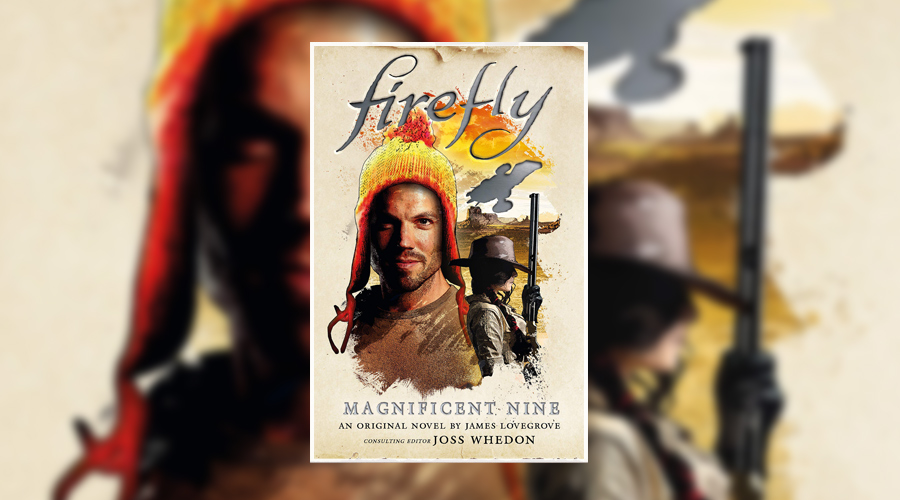 Firefly was a short lived TV series that, in part due to the Joss Whedon effect, became a cult series. It has spanned numerous iterations, including a movie, Serenity, comics and books. The Magnificent Nine is the second in a trio of original novels, all canon, which take place between the TV show and the movie.

The Magnificent Nine is a well written episode of Firefly, but whether you really enjoy the story will come down to your dedication to the series and how much the character of Jayne Cobb is of interest to you. Its central plot revolves around Jayne getting a wave (message) from a former love who has found her town under attack from a group of bandits. She wants Jayne to gather as many fighters as he can find and come save her one-horse town, on an out of the way planet, from complete destruction. Are you intrigued?

The as-expected outlaw gang terrorising Temperance, Jayne’s former partner in multiple senses, and her town, is led by Elias Vandal, a man with a disfigured face and a dark past. He’s gathered all the town mischief makers from across the planet and corralled them into taking what they want, when they want. Since Temperance can’t seem to rouse a fighting spirit in the townsfolk, it’s up to the crew of the Serenity to take up arms and be the last line of defence.

This is not a highly original story; the western style of the Firefly universe doesn’t really lend itself to reinvention, but rather twists on the expected. It a techno-cowboy world with saloon bars with wooden tables, but also hovercrafts. Any twists or turns in the adventure, if you think about them for a moment, are clearly spelled out and you won’t be surprised by the stages of the story. It hits the usual beats with standoffs, surprise attacks and secrets waiting to come out.

What you do get it a well told story, with the voices of the characters – who most readers will be familiar with – perfectly recreated on the page. There’s never a point when you think: well they wouldn’t say that. In that there lies a predictability, and that’s in part down to the focus of the story being on Jayne. He’s a brute, with some feelings, who doesn’t really take time to consider his actions or the people who rely on him. He might be considered well intentioned if he wasn’t so irritating about it – both to his fellow crew members and this reader. If you like a fight to the death and bravado in your protagonists, then you’ll probably find The Magnificent Nine to be a rollicking escapade. (You probably also don’t say rollicking escapade.)

If you’re looking for an excuse to re-enter the world of Firefly, taking another flight with a beloved crew, then this is a good choice. The visuals are well described, so you can imagine the landscape. Having prior knowledge of who everyone is is kind of a must. I don’t know that as a standalone book you would really fall in love with the universe, but it’s certainly a book that’s right up the alley of anyone who likes a classic western, the Terminator movies, or has read any of the tie-in Star Wars novels created before the trilogy starting with The Force Awakens.