Jojo Rabbit is trying to be a perfect combination of poignant satire and uproarious comedy, using the past to connect to the present. The director of Thor: Ragnarok and The Hunt for the Wilderpeople is in a position to create whatever he wants, with a built in audience who, just knowing Taika Waititi is attached, are ready and raring to go. That being said, Waititi may have bit off a little more than he could chew with Jojo Rabbit. The bold statements and profound themes that he hopes to communicate, with an imaginary Hitler as the best friend of our lead Jojo, lacks the power that such weighty themes expect. But an outstanding cast, with many laugh-out-loud guffaws and a tone akin to Wes Anderson, means those who are fans of Waititi won’t be disappointed despite my reservations.

Johannes (Roman Griffin Davis) is amped up in preparation for a summer Hitler Youth camp. He has his swastika firmly strapped on, a knife on his side and Hitler himself (played by director Waititi himself) standing by, excitedly, to join him on this time away. The opening credits fuse the bubble-gum pop of The Beatles with the fandom of fascism. Peeled from actual footage of Nazi rallies, it is an unsettling beginning, but it immediately sets up the themes Jojo Rabbit aims to explore. The innocence, and naïveté, of youth. The reality of real people passionately and, with a warped sense of hope, believing in the fascist government. Our own knowledge of how horrific the atrocities of World War II was, and how the Holocaust happened, is expected to be brought to the table too. As Jojo runs through the streets of his town, we see the long line of malnourished families that lead to a government building. We know what is happening, but it is the ten-year-old of Jojo we follow in his absolute joy for his summer plans. 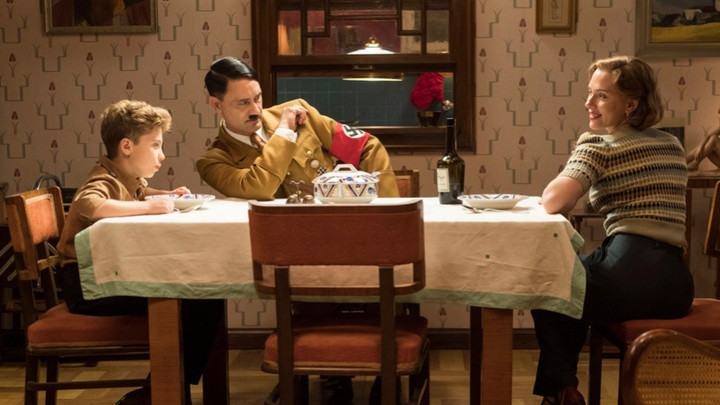 After our initial sojourn to the twisted adventure of Nazi Camp, where Captain Klenzendorf (Sam Rockwell), Fräulein Rahm (Rebel Wilson) and Finkel (Alfie Allen) are hilariously introduced, we move back to the town, where Johannes’ Mum (Scarlett Johansson) becomes a key part of this two-hander between Jojo and a new house guest (Thomasin McKenzie) – a resident who Hitler is not too happy about. Considering, for the most part, actors are portraying Nazi officers and Hitler fanatics, the script ensures that every character is either a clueless buffoon or a conflicted klutz. Clownery and exquisitely timed jokes are carefully executed and whether they are subtle character moments (wait for that moment between Rockwell and Allen…) or one-off, hilarious dog gags, it goes without saying that you will find the film a lot of fun.

In an era of electoral corruption and laughable presidencies, 2019, like the early 1940’s, actually exist and innocent people suffered and suffer as a consequence. Shot by Mihai Mălaimare Jr., the cinematography is sublime, with dusty towns and lush green fields that capture the beauty of the European locations. It has weight and gravitas, jarring against the flippant jokes that can often undermine the seriousness of the issues raised. While paying mind to the anti-hate argument Waititi sincerely makes, it is possible to reduce the ideas to quirky teenagers and a rebellious context for the most part. But, Jojo Rabbit doesn’t stray from the expectation most will have and, in that respect, it more than delivers. Waititi stans will be satisfied but there’s a niggling feeling that this fun, jokey movie could have been so much more.