Have you ever seen a large group of cats just hanging out together? I’m talking about some ten or fifteen or so all sitting and lying around, each of them weirdly unfazed by so many of their own infamously territorial kind. Ever seen that?

I have. I was walking through long grass in the waste ground between an abandoned trainline and the back of a housing estate one summer afternoon. I was young and hare-brained and thought I had found a short cut to a friend’s house (I most assuredly had not and had yet to realise that fact). Ahead of me stood a broken armchair somebody had dumped, its back and arms jutting out of the grass along with a lot of other junk. The chair’s beige fabric appeared to be undulating, almost breathing, until I realised the thing was covered with cats.

There must have been seven or eight on the armchair but, as I passed, I saw more; two on an old TV nearby, three on a rolled carpet. Only then did I realise there were others in the grass itself and that I was already deep within their domain. Some of the cats looked alarmingly feral whereas others appeared to be leading some secret life away from their unwitting owners.

I read later that, given an abundance of food, cats will happily socialise in numbers. But sometimes I think there is more to it, some reason just out of reach of human understanding. There was a serenity to my cats, a dreamy nonchalance I’ve never known before or since and that I find difficult to put into words. Time seemed to slow to their pace, not mine, on that sunny day long ago. This was their realm and they had less than no regard for a human interloper.

Decades pass and I’m drafting a fantasy novel I don’t yet know will be called Pennyblade and will eventually be published by Titan Books. The protagonist, Kyra Cal’Adra, is of a people called the commrach. The commrach are unashamedly in the elven mould: slender, nimble and, of course, pointy-eared. Yet the more I write them the more they acquire feline qualities. Sharp incisors for one, not to mention female commrach going into oestrous (with all the associated trouble and noises) but more fundamentally these people have a house cat-like mentality. With that in mind, how might their cities look?

A city of cats. With feline town planning. What a thought. Some might even call it a contradiction in terms. But, assuming it’s somehow not, how would the cat mentality go about living together in city-sized numbers?

From the outset I realised any attempt at true centralised power was a dead end. Like herding cats you might say. Kyra’s city, Corso, would have no seat of power, no ultimate palace or temple and few if any public buildings in the accepted sense.

Unlike a human city, which often begins with several villages coalescing and then coming under the oversight of a single regime, I pictured Corso materialising far more haphazardly.  Groups of commrach, hearing resources were plentiful, mooched into the area, all the while pretending to ignore the other tribes of moochers. Over centuries this has created a city of thirty-two districts, all of which are largely self-sufficient and, on a day-to-day level, self-determining.

Each district’s borders are highly patrolled and street wars are a fairly common phenomenon. This makes leaving the city damn nigh-impossible for the common citizen as alliances between districts can mutate into rivalries at a moment’s notice. An overall peace is kept by the threat of the other cities upon the Isle and by marriages between tower-families, Corso’s aristocracy.

At the centre of each one of these roughly circular districts loom great towers, the tallest edifices in the known world, some twenty storeys high. The buildings immediately surrounding these towers are far smaller yet taller than those that surround them in turn, the dwellings and shops descending in height as the district reaches its outer edge.

Height over one’s neighbours is a fundamental aspiration in Corso. This is a foible I based on feline behaviour Terry Pratchett, in his wonderful book The Unadulterated Cat, names ‘cat chess’, where ‘the object of the game is to see every other cat while remaining unseen yourself.’ To cats, there is no finer way of achieving that aim than owning the higher ground, as any garden wall or garage roof will attest to.

But it is always possible to fall. The families who currently own each tower in Corso could tell you as much if they were not so focussed on keeping their place in the sun. Corso is an unforgiving sort of town. How could it be otherwise?

Writing this now, I recall I turned back to look at that old armchair and its population of cats. Basking in the sun, not one of those sleek denizens returned the courtesy of looking back at me. It was their little city after all, not mine. But I think I took a bit of it with me.

Pennyblade by J. L. Worrad is published by Titan Books on 29 March 2022 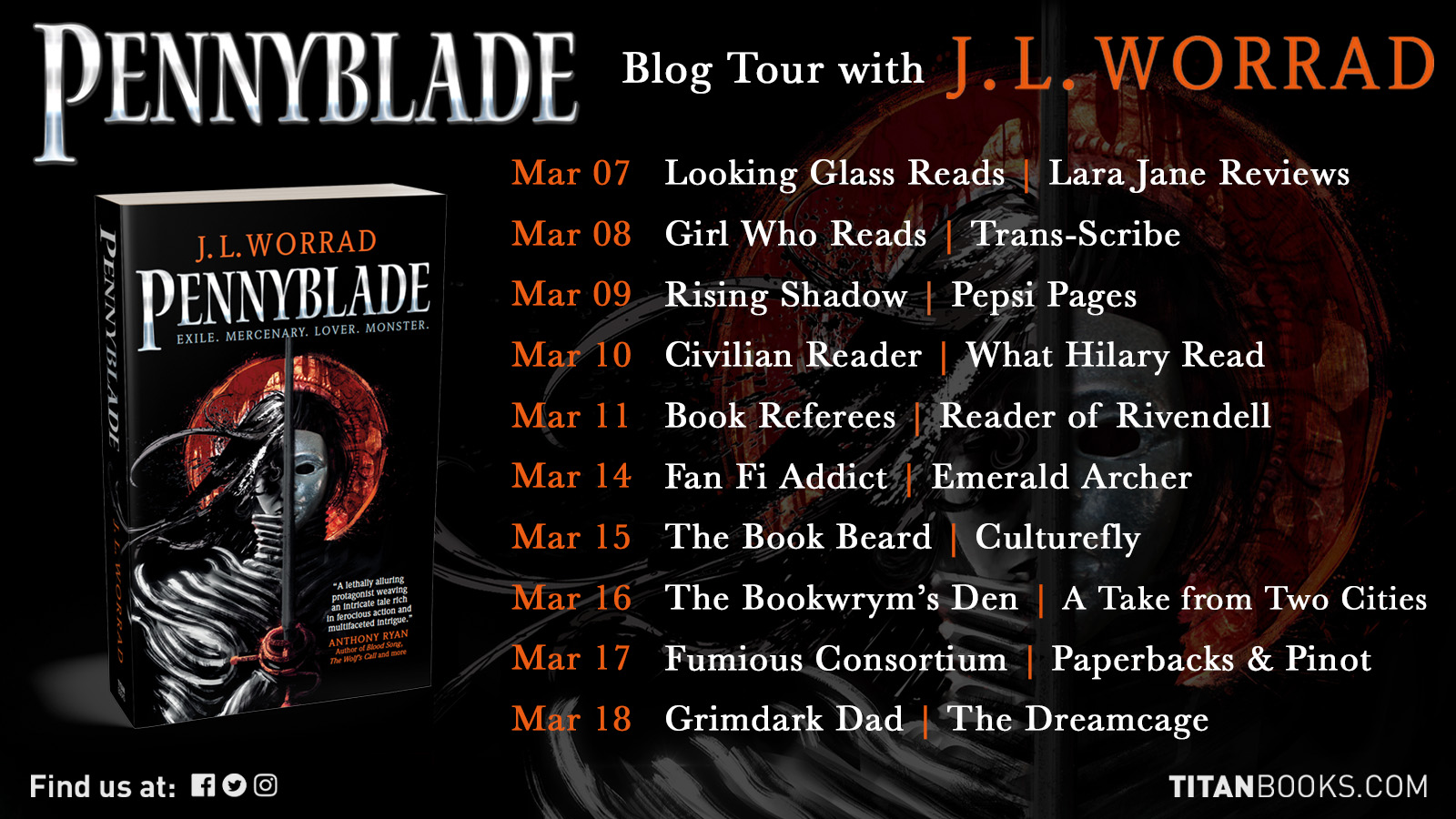