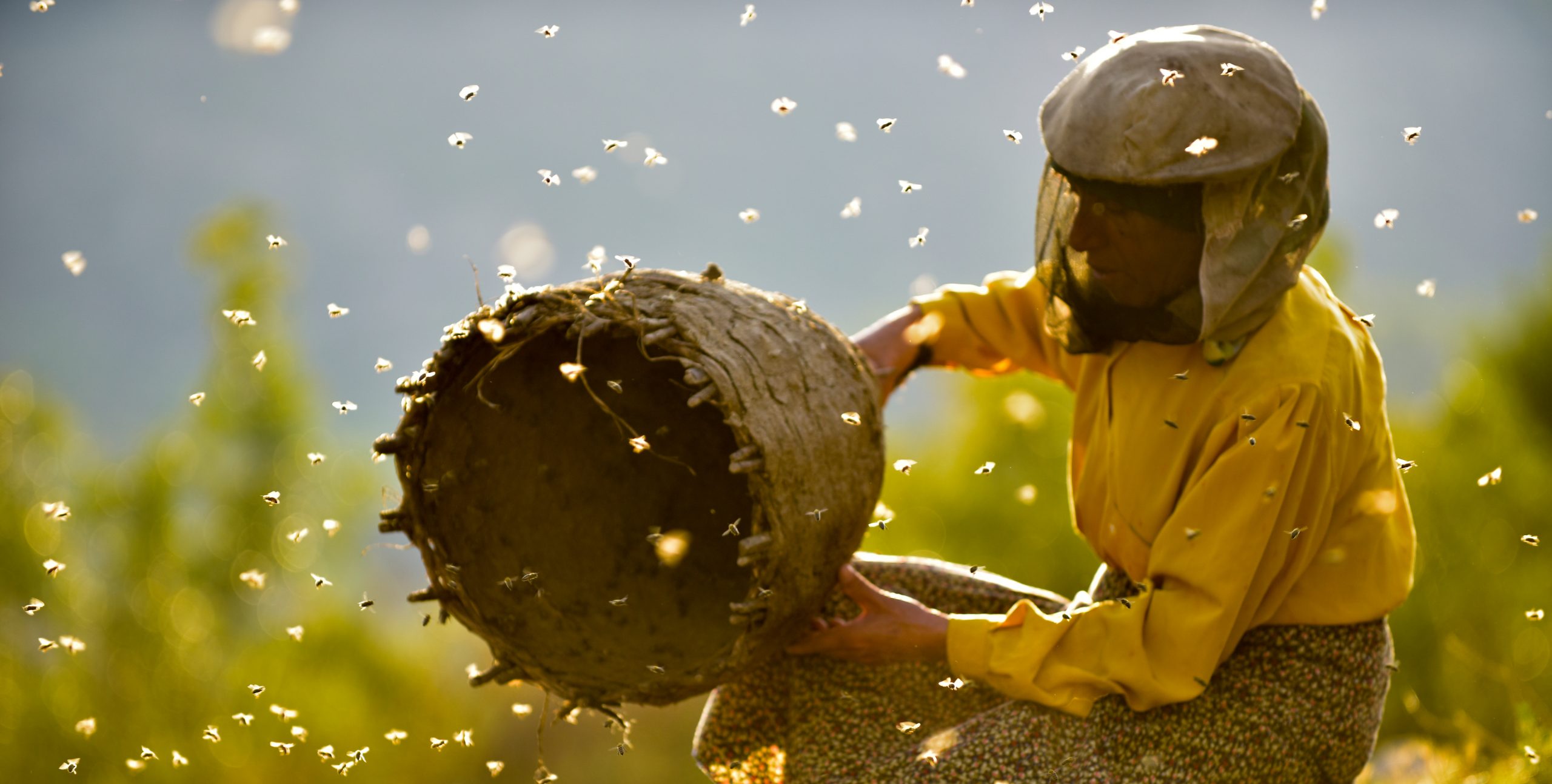 I defy you not to fall in love with Hatidze, the last female beehunter in Europe and star of riveting new documentary Honeyland. When we meet her she is beginning another long and perilous beehunting journey, a journey that ends with her shimmying along a cliff edge to the place her targets are hiding. She is 55, with a face so weathered she could pass for 75, but moves with the agility of a woman decades her junior.

She lives with her ailing mother Nazife in a tiny settlement in Macedonia. Nazife is so ill, she rarely leaves her bed (when Hatidze suggests they leave their home for a little bit, her mother replies, “You can’t take me out, I have become a tree.”), but for the most part she manages to stay cheerful. Hatidze and Nazife have an amusingly Grey Gardens-esque relationship – confrontational, yet always full of love.

The real conflict of Honeyland arrives with the family of nine who move in next door. Hussein, his wife and their seven children are initially on good terms with Hatidze. She gets on well with all the kids, and they enjoy a laugh and joke together. They conjure up a makeshift aerial and sing along to the radio. They share meals. Rather than being annoyed at the noisy mass of children who have interrupted her peace, she is grateful for the company.

The problem starts with the bees. Hussein is fascinated by Hatidze’s occupation, and she is gracious enough to teach him the tricks of her trade – the most import being that when you collect honey, you must leave half behind for the bees. At first, he follows her advice. But then a greedy businessman arrives on the scene, promising riches if Hussein improves his yield. When he starts taking all of the honey, the effects on both his bees and Hatidze’s are catastrophic. 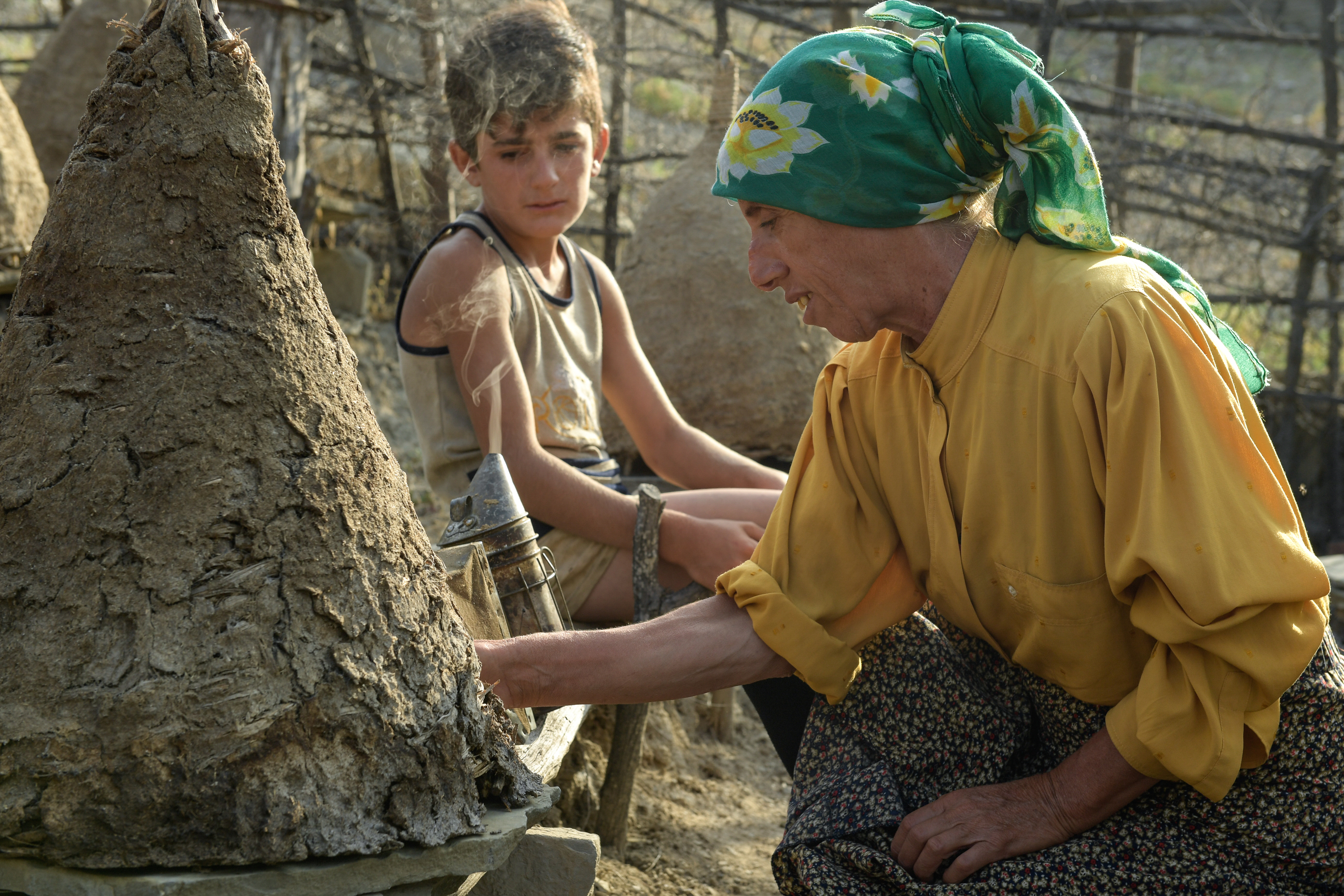 Honeyland moves along with the dynamism of a fiction film. The story is so gripping, the characters so vivid, it’s hard to believe this isn’t a tale cooked up in the mind of a creative genius. Co-directors Tamara Kotevska and Ljubomir Stefanov have a real knack for crafting a narrative out of little moments, routines and conversations.

In addition to the beekeeping conflict, and the mother-daughter relationship, another strand that takes centre stage in the documentary is the friendship between Hatidze and one of Hussein’s older sons. The boy is rightfully angry with his father, who is rough with his children and often treats them more like an unruly work force than his own offspring. When Hussein’s bees stop producing, it is his son who tries to tell him it’s because he’s stopped following Hatidze’s edicts. The father doesn’t listen.

The relationship the boy shares with Hatidze is the heart of the movie. Curious as to why she would remain in such an isolated, unforgiving area, he asks, “Why don’t you leave this place?”. She replies, quietly, “It would have been different if I’d had a son like you.” That exchange marks the beginning of an impossibly moving final act.

By the time Honeyland – beautiful, riveting, sad, funny Honeyland – is done with us, it feels like we’ve been wrenched through the emotional wringer. And I, for one, am so grateful to have had that experience.