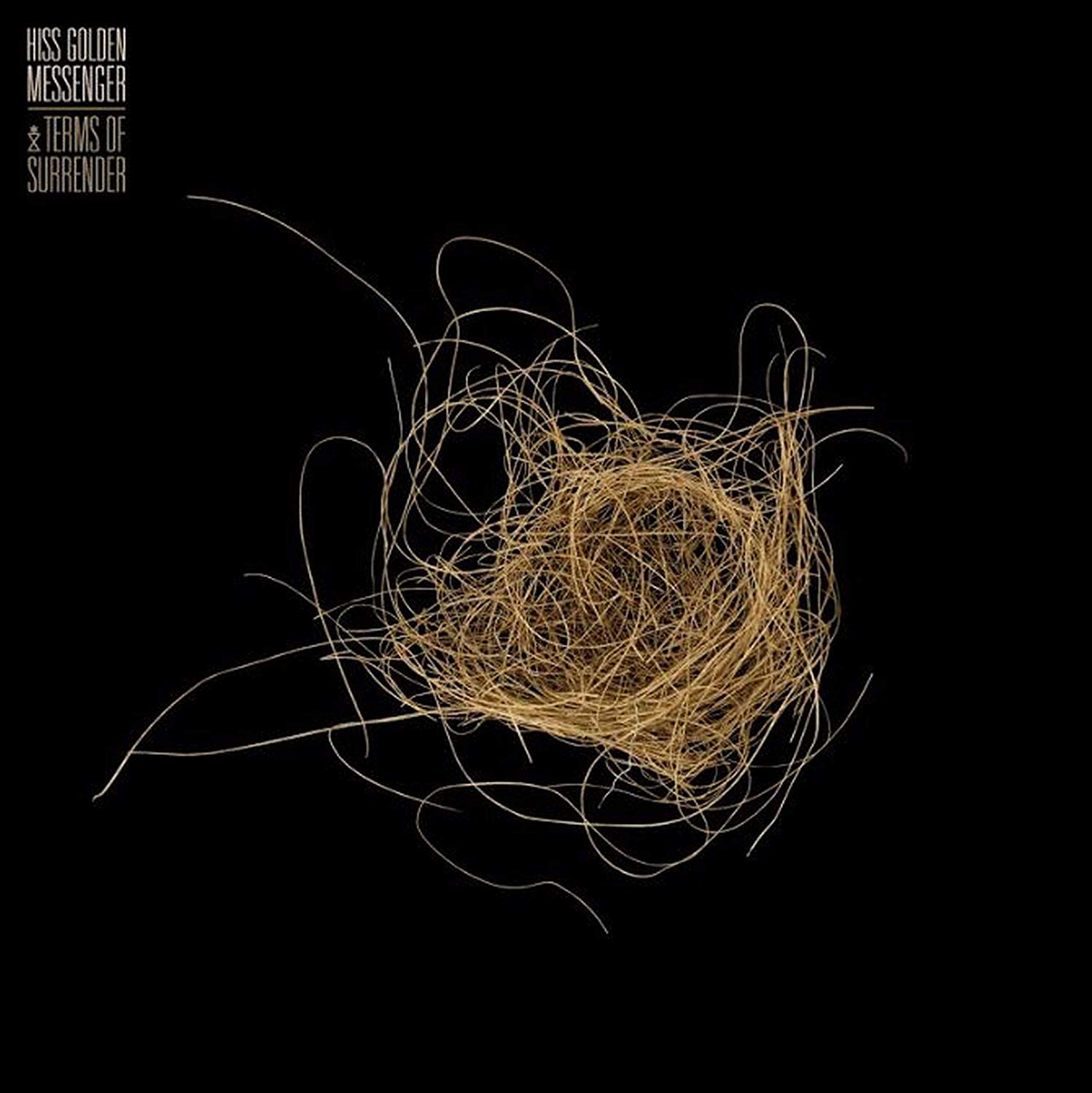 Terms of Surrender, Hiss Golden Messenger’s latest release, is a dark and troubling beast. Following a trio of sunny LPs – Lateness of Dancers (2014), Heart Like a Levee (2016) and Hallelujah Anyhow (2017) – it sees songwriter and shaman M.C. Taylor execute a sudden bank into blackness.

Everything from the menacing, throaty blues harp on ‘Whip’ to the barked, indistinct vocals on ‘Down at the Uptown’ speak of pain. The cover is black, adorned with a mess of straw. A nest disturbed, sanctuary unravelled. The inner sleeve is riven with strands of white paint, like confused Rorschach static. Taylor himself peers out of the murk on the back, mouth and nose covered by a clenched hand, kohl-rimmed eyes burning beneath newly long, lank hair.

Gone is the purposeful optimism of Hallelujah, its high-road belief in the goodness of families, towns and communities, its desire to counter Trumpism with humanism. In place of that roadworn joy, a thundercloud hangs over the wax. This is the sound of a man close to the edge – which indeed he was.

2018 was a rough year for Taylor. His father suffered a heart attack and his depression meds stopped working. He was feeling the weight of separation from his family during long stints on the road – the same family who have provided the light on earlier records.

In the midst of these storms, a lesser man might have fallen silent. But Taylor put pen back to paper and wrote the songs that would become Terms of Surrender. The result is an exquisite, trembling meditation on pain and doubt.

‘My Wing’ starts on Hiss’s signature off-beat guitar vamp, but it’s weaker than usual, quieter, less sure. It takes time before the more strident electric takes up the call and pushes the track into movement, and all the while Taylor sounds cagey, twitchy, as though he’s having to fight to stay focused on the melody.

‘Bright Direction’ is the closest the album comes to a traditional Hiss tune, rolling along on a breezy Hammond line and a chord progression that’s almost poppy. But there’s still a rich seam of melancholy to be mined, a hint of worry in the words and sounds: ‘I’ve been wandering lately / Drowned in information / Somehow I’m still lonely / It’s a complex equation.’

The album’s nightshade vibe reaches its apotheosis on ‘Old Enough To Wonder Why’, a stark, gothic swamp-stomp. Heavy drums, otherworldly harmonica and pure, quavering synths paint a worrisome, spiky backdrop as minimal banjo and murmured vocals fill the foreground. Like so many of Hiss’s best songs, it’s not out-and-out miserable – the key is broadly major, the melodies have swing, the harmonies are bluesy – but there’s an indistinct menace gliding below the surface.

These ominous atmospherics are followed by the moonlight balladry of ‘Cat’s Eye Blue’ whose skeletal sparsity stands in stark contrast to more familiar, light-in-autumn Hiss fare. Monotone drumbeats again set the tone, punctuating gossamer veils of synth and Will-O-The-Wisp backing vocals. Taylor’s mournful voice is barely louder than a whisper, cracking round the edges as he agonises between despair and the slight wings of hope: ‘I ain’t perfect, baby / You can hear when I’m singing. / Little bird on the wing / Almost too quiet to notice / I’ll follow the thing.’

This album is little short of a masterpiece. Taylor fashions the venerable stuff of American folk into new anthems of eternal significance, his nasal whine picking the fibres of life, his chickenfoot guitar scratching at the dirt of time. On Terms of Surrender, he stares right down the barrel of darkness and somehow comes up with a quivering light.

Art doesn’t slap you in the face, but it stays in your veins. And an infusion of Surrender takes a long old time to exit your bloodstream.