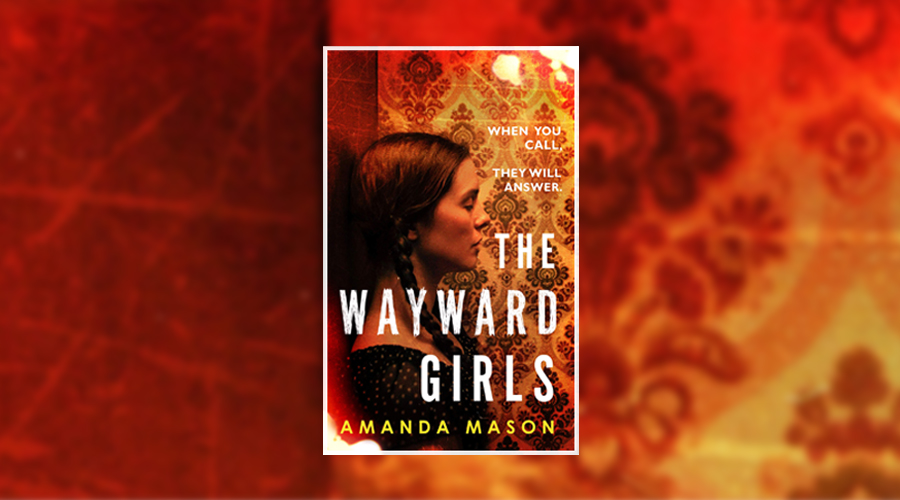 Like Shirley Jackson’s The Haunting of Hill House and Sarah Waters’ The Little Stranger before it, Amanda Mason’s The Wayward Girls is a ghost story that blurs the lines of what’s real and what’s a figment of characters’ imaginations. Themes of sisterhood, growing up, loss, envy and complicated family dynamics are all weaved into this domestic gothic debut, which is set on the Yorkshire moors and alternates between the past and the present.

The story follows the dysfunctional Corvino family, specifically middle daughter Loo and her older sister Bee. As children, Loo and Bee live a bohemian existence with their artistic parents and wild siblings. They’re home schooled, isolated at the rural Iron Sike Farm, and shunned by their neighbours who disapprove of their unconventional lifestyle. The girls are bored, lonely and craving attention, which is exactly what they get when strange noises and inexplicable happenings begin to occur in the house, upsetting the family’s simple existence.

Against the backdrop of a stifling summer in 1976, the family are disturbed by banging in the walls, inanimate objects flying through the air and furniture moving on its own. When a team of paranormal investigators arrive at the house, along with a young local newspaper photographer, the girls find themselves at the centre of the ghostly occurrences. Meanwhile, in the present day, Loo has moved away from her childhood home and now goes by the name of Lucy. However, she’s drawn back to Iron Sike Farm when her ailing mother is contacted by a group of students who are determined to uncover the truth about the haunting events and the family who lived there.

“The haunting began quietly once the Corvino family had settled into their new home; the girls heard it first, the knocking inside the walls.”

All great ghost stories carry a hint of doubt and ambiguity; the suspicion that what characters are seeing and experiencing – the spectral presence lingering in the shadows, the icy dip in temperature, the unexplained moving of objects – isn’t actually happening but is instead conjured in their minds. What made The Haunting of Hill House so unnerving was the feeling of terror it evoked, the tense atmosphere and nerve-racking build-up before anything horrifying had even happened. The Wayward Girls adopts this approach early on, offering up classic ghost tropes with a contemporary twist that leaves you second-guessing the characters and the paranormal phenomena that plagues them.

This is a ghost story that is intrinsically linked to girls and women; to the intensity of young girls’ emotions as they’re growing up, and the idea that they’re more susceptible to supernatural occurrences. Mason delves into the fundamental bond between sisters, exploring Bee’s dominance of her younger sister, and Loo’s naive adoration that very slowly begins to disintegrate the more she’s subjected to Bee’s petulance and overbearingness. This slow, eerie set-up only serves to heighten the mounting terror as an adult Lucy morphs back into Loo, forcing her to confront what really happened all those years ago.

Mason’s debut is an atmospheric and spine-tingling novel that carries all the hallmarks of a classic ghost tale, with dark layers that gradually peel open to expose more and more of the Corvino family’s tragic secrets. It’s the perfect read for these dark Autumn nights when all you want to do is cosy up next to the fire. Be sure to hide under a blanket because this book will give you serious chills.

The Wayward Girls was published by Zaffre on 5 September 2019