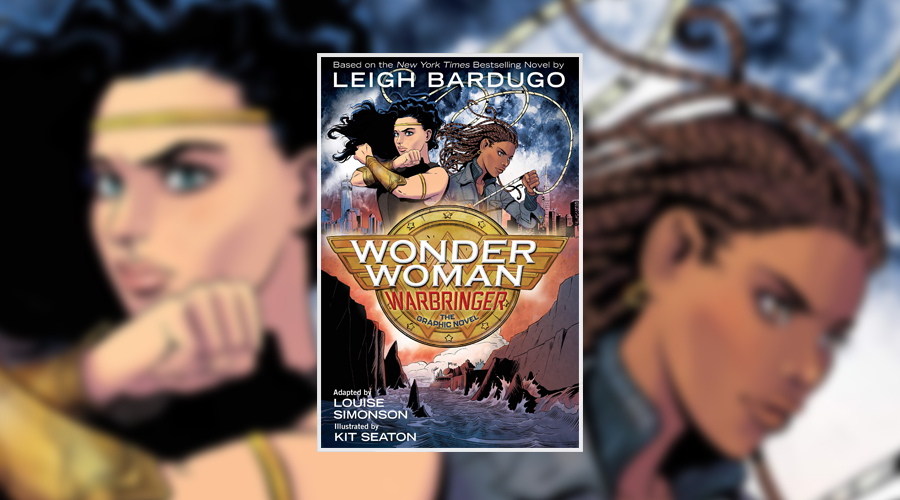 Wonder Woman: Warbringer is the graphic novelisation of an original book by Leigh Bardugo. In Louise Simonson’s adaptation, illustrated by Kit Seaton, Diana has yet to leave The Amazons on Themyscira; this is what leads her in the wider DC world of superheroes. While taking part in a traditional Amazonian competition, Diana comes across a crashing ship and saves a young woman, Alia, the sole survivor. The future Wonder Woman has just chanced upon a Warbringer who may, unknowingly, be about to bring an end to her homeland and then the world.

Warbringer is a fun adventure story, with a good dose of mythology. In seven parts, similar to the length of an issue of a comic book, we explore Diana’s life on the island and a young-ish iteration of Wonder Woman who hasn’t quite solidified her place among the Amazons. Then she risks her place with her sisters and journeys with Alia to save her life and the world, meeting her closest friends and brother along the way. We see her interact with the modern world and share her versions of the classical stories of heroes and monsters, correcting assumptions about the roles of women in the legends. It all culminates in a face paced chase which manages to give readers an entertaining fight while deepening our understanding of Diana as a character in an affecting way.

Bardugo and Simonson’s story is set in the present day and as a result we get a diverse group of characters in terms of race, sexuality and body type. These aren’t key points of these characters necessarily, merely recognisable representation, and as many comics still don’t do this, it is welcome. The friendship and family relationships feel real and you are drawn to this cast of comrades.

The story comes to life on the page like a well told folktale with a primarily cerulean and lapis colour palette, which has a watercolour quality to it. Seaton uses shades of red to create contrasts in the scenery, such as with fires, lighting, and for the story, with the meddling of certain gods in events. In the race to reach Helen’s resting place at sunset, the contrasting blues and reds are brought together to match the intensity of the tale and the descent of the sun.

What makes Warbringer such an enjoyable read is the balance of superhero adventure and the links with Diana’s ancient world that give it an epic flavour. Plus it deals with relatable issues for young people, in particular but not exclusively, around independence, attraction, a technology based world and the value of different people in modern society. Wonder Woman: Warbringer is recommended for those who enjoy YA, which often touches on prescient topics in accessible ways, and those who want to dive into Wonder Woman in a standalone story – rather than diving into a current comic book run.

Wonder Woman: Warbringer was published by DC Ink on 7 January 2020